Why do we make the Sign of the Cross from the left to the right? 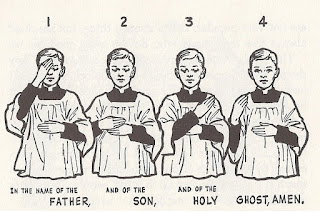 From time to time I am asked a simple question:


Why do we make the Sign of the Cross from the left to right when other Christians do so from the right to the left?

It is a good question, but one to which I have only be able to say, "Because we do." Until today.

Because the sun shone brightly today in Rome and warmed things up nicely, I found myself sitting outside with several books all afternoon, one of which was Familiar Prayers: Their Origin and History by Herbert Thurston, S.J. (London: Burns and Oates, 1953).

There was, it seems, in the Middle Ages a concern about whether the Sign of the Cross should be made from the left to the right or from the right to the left. Or with a thumb, or two - or three - fingers on the forehead. Thurston more or less sorts things out (the situation remains a bit unclear) when he brings up a quotation from Pope Innocent III's (d. 1216) De Sacro Altaris Mysterio (2.45):


Some, however, make the sign of the cross from left to right because we ought to go from misery to glory, like as Christ also passed from death unto life and from the place of darkness to paradise, the more so, they sign both themselves and others in one and the self-same manner. But it is agreed that we sign them from left to right. But if you notice carefully, the fact is that we trace the cross over others also from (their) right to (their) left, for we do not sign them as they turn their backs to us but as they face us [he seems here to be speaking of the blessing priests give to the faithful] (11).

He also quotes from the De Altera Vita, Adversus Albigenses of Lucas Tudensis who wrote in Spain a few years after Innocent III. Lucas affirmed that both ways of making the Sign of the Cross - whether from left to right or from right to left - are "good, both holy, [and] both able to overthrow the might of the enemy." But because "many people" said the Sign of the Cross should not be made from the left to the right, he explains why this method is proper:


For when our Lord Jesus Christ for the redemption of the human race, mercifully blest the world, He proceeded from the Father, He came into the world, He descended, on the left hand as it were, into hell, and ascending to Heaven He sitteth on the right hand of God.Now it is this which every Christian seems to portray, when, on guarding his face with the sign of the cross, he raises three extended fingers on high, in front of his forehead saying, "In nomine Patris" [In the name of the Father], then lowers them towards his beard with the words "et Filii" [and of the Son], then to the left saying, "et Spiritus Sancti" [and of the Holy Spirit], and finally to the right as he utters "Amen" (12).


Although some do the contrary, still in tracing the representation of the crucifixion of Christ, we ought upon our forehead to end the cross upon the left side; for they crucified Our Lord's right hand before the left...as may be inferred from the fact that when a man is taken hold of by his enemy, seeing that he is stronger in his right hand than in his left, the right hand is seized and bound before the left (14).

There you have it.

While we're on the topic, let me recommend to you Bert Ghezzi's excellent book, The Sign of the Cross: Recovering the Power of the Ancient Prayer.
Posted by Rev. Daren J. Zehnle, J.C.L., K.C.H.S. at 3:20 PM