What is a boring homily? 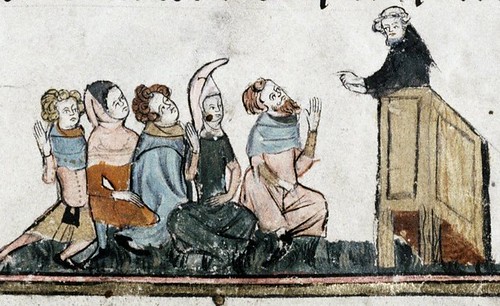 The ever-witty Eye of the Tiber posted yesterday a new article about a new Catholic app, one that many likely wish actually existed:

The Vatican announced this morning that they have launched “CrapHom,” a new app for iPhone and Android that allows Catholics to view which local parishes will have the lamest homilies and which will have the least lame homilies [more].

The bit of satire comes only a few days after the Holy Father Pope Francis admonished a group of deacons he was about to ordain that their homilies not be "boring":

And this is the nourishment of the People of God; that your sermons are not boring; that your own homilies reach people's hearts because they come from your heart, because what you are saying is truly what you have in your heart [more].

This was not, of course, the first time His Holiness criticized preachers for preaching "boring" homilies. When he visited Assisi in October 2013, he said to a gathering of clergy, "Away with these never ending, boring homilies that no one understands. This is for you!" I'm not sure how many homilies actually meet those three characteristics. Not every long homily is boring and not every short homily is interesting, nor is every brief homily understandable.

Everyone - so far as I am aware - agrees that boring homilies should be avoided at all costs. The difficulty, though, comes in defining just what a boring homily actually is.

When the Homiletic Directory was released a few months ago, His Excellency the Most Reverend Arthur Roche, Secretary of the Congregation for Divine Worship and the Discipline of the Sacraments, said that within the homilies of Pope Francis "there is nothing boring. There is always something that challenges people. This is the point.” But I know plenty of people who are bored by challenging homilies, if for no other reason than they do not want to change and only want to be told that everything is fine.

Whenever I listen to a homily and see the preacher has a prepared text, I automatically listen with interest because I know he has taken time to consider what he will say. Others, though, see a prepared text and cringe because they find such texts boring and claim the preacher isn't preaching from the heart (because it is apparently impossible to put heartfelt words on paper).

Others find homilies in which the preacher tells a few jokes or shares personal stories to emphasize his point to be interesting. I, on the other hand, cringe when a preacher starts talking about himself and find such homilies rather tedious (which is maybe worse than being boring).

We too often forget that so much of what makes a homily boring is entirely subjective; if a person does not want to hear the Gospel, now matter how interesting others might find the homily, such a person will most always find it boring.


On the first day of the week when we gathered to break bread, Paul spoke to them because he was going to leave on the next day, and he kept on speaking until midnight. There were many lamps in the upstairs room where we were gathered, and a young man named Eutychus who was sitting on the window sill was sinking into a deep sleep as Paul talked on and on. Once overcome by sleep, he fell down from the third story and when he was picked up, he was dead (Acts 20:7-9).


Don't worry; Paul brought him back to life. Notice that it was only Eutychus who fell asleep; the others were, presumably, interested in Paul's words.

The quality of much preaching today is certainly in need of improvement, but I'm not sure focusing on making not boring is the answer; doing so runs the risk of striving to make them interesting, which too often falls to focusing on the preacher. We should seek instead to proclaim Jesus Christ; it would be hard to say that he is boring.
Posted by Rev. Daren J. Zehnle, J.C.L., K.C.H.S. at 4:51 AM