The Fifth Sunday of Lent (A) 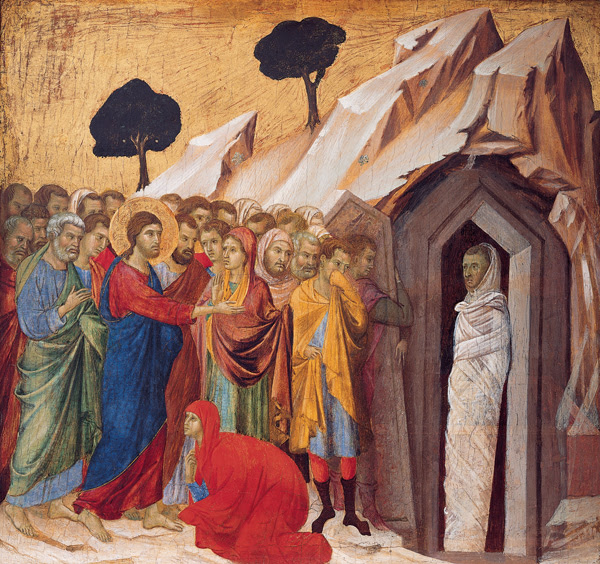 Martha said to Jesus, “Lord, by now there will be a stench” (John 11:39). Her words sound quite blunt to our sensitive ears in an age that attempts to disguise and hide the stark reality of death. Most of the Fathers of the Church read her words in the literal sense of Scripture and noted that they simply confirmed the fact that Lazarus was indeed dead, should anyone have doubt. Saint Augustine of Hippo, however, heard these words in a different sense.

Rather than recognizing in Martha’s words the certainty of a physical death, the Doctor of Grace recognized instead the certainty of a sinful man. “But whoever has become habituated to sin,” he said, “is buried and has it properly said of him, ‘he stinks.’ For his character, like some horrible smell, begins to be of the worst repute.”[1] So it is that we have before us today two stenches, and one is surely worse than the other.

In contrast to the stench of sin, we know that many of the saints had a certain odor of sanctity about them. This was first noticed, so far as we know, with Saint Polycarp, who smelled like frankincense as he was burned alive in the year 155.[2] To be sure, this odor of sanctity can be either physical or symbolic, as when we say of someone, “She had the odor of sanctity about her.” Ideally, though, both the physical and the symbolic would be true or any one of us who claim the name of Christian.

We can be certain that both the stench of sin and the scent of sanctity will be revealed when the voice of the Lord at last resounds, not simply outside of Bethany but throughout the entire cosmos, when Jesus commands: “…come out” (John 11:43)! Yes, we, too, will come out of our tombs and stand before the Lord, or, more properly, fall down before him and worship (cf. Matthew 2:11, Revelation 19:10). When he calls us forth, will someone say of me, “By now there will be a stench”? Will someone say of you, “She stinks”?

When the Lord Christ summons us from our graves, will we be marked with the stench of sin or with the scent of sanctity? We must ask ourselves, “Of what do I smell today?,” because today may be our last. We cannot know, but that is no reason to remain with a stench. If we notice someone keeping his or her distance from us, do we not often ask in jest, “What? Do I smell?” If we inquire about our physical odor in these earthly and passing occasions (even as a joke), how much more should we inquire as to the scent of our souls!

It is against the backdrop of this very question that today we pray to the Father, asking that “we [may] walk eagerly in that same charity with which, out of love for the world, your Son handed himself over to death.”[3] In the end, when it comes down to it, sin is nothing more than a failure to love authentically and fully, to love God in and through all things and to love our neighbor in and through all things; sin is a lack of charity and those who are without love, those whose souls are stained with sin, stink.

Following this insight of Saint Augustine, it seems that the scent of sanctity did not permeate Lazarus’ life, but rather the stench of sin. Perhaps, though, this is putting things too strongly. At the very least, it seems that his own sister did not think the scent of sanctity issued forth from him. Yet Jesus nonetheless counted Lazarus among his friends and wept out of love for him (cf. John 11:35). In this, there is hope for us, too! For if Lazarus remained a friend of Jesus despite his sin, we, too, can also remain friends of Jesus!

If we are honest, I daresay we all have about us the stench of sin more often than we have about us the scent of sanctity, yet the Lord loves us anyway and weeps for us when our sins bury us and we begin to stink. For this reason, we must return frequently to the bath of confession to wash away our stench (an opportunity available to us this afternoon at St. Peter’s). Here we arrive at the intersection of these two senses of Martha’s words, because “nothing moves a sinner to amend one’s defects and correct one’s sins as much as the knowledge and memory of death.”[4]

You and I will each die. There is no sense in denying it or hiding from it. For the Christian, for the one who has already died with Christ Jesus in the waters of Baptism; for the one who has eaten and drunk the Body and Blood of the Lord; for the one who humbly confesses his sins and receives absolution, there is nothing at all to fear in death. In death, we may close our eyes to this world, but we will open them again to look upon the face of God Who says to us, “O my people, I will open your graves and have you rise from them” (Ezekiel 37:12).

Yes, “The teacher is here and is asking for you” (John 11:28). Will you rise quickly in your heart and go to Him (cf. John 11:29)? Will you speak plainly and honestly to Him? Will you humble yourself before Him in love and allow Him to wash away the stench of your sin?

If you do, you will learn that He is indeed the Resurrection and the Life (cf. John 11:25). Today, let us return to the Lord that the stench of our sin and may be changed to the scent of his holiness. Thus, we shall know his “mercy and the fullness of redemption” and our hearts will be finally at peace (Psalm 130:7)! Amen.
[1] Saint Augustine of Hippo, Tractates on the Gospel of John, 49.3. In Ancient Christian Commentary on Scripture: New Testament Vol. IVb: John 11-21. Thomas C. Oden, et al, eds. (Downers Grove, Illinois: Inter Varsity Press, 2007), 26.
[2] The Martyrdom of Polycarp,15.
[3] Roman Missal, Collect for the Fifth Sunday of Lent.
[4] Saint Bonaventure, Sermon 38: Eleventh Sunday after Pentecost, 12. In Works of St. Bonaventure, Vol. XII: The Sunday Sermons of St. Bonaventure, Timothy J. Johnson, ed. (Saint Bonaventure, New York: Franciscan Institute Publications, 2008), 416.
Posted by Rev. Daren J. Zehnle, J.C.L., K.C.H.S. at 7:04 AM