Big days ahead in Rome: Here comes everybody

James Joyce once wrote that being Catholic means "here comes everybody," a phrase which certainly applies well to the coming days in the Eternal City as pilgrims are now arriving in droves from every part of the world in attempt to witness something of the canonization Blessed Popes John XXIII and John Paul II.

The city of Rome is home to some 2.5 million people, no small number for a city that is 2,767 years old. Officials with the city of Rome are expecting an additional 1 million people will be in the city for the weekend's celebrations (in a city that can almost accommodate its usual population), though I expect that estimation to be very, very low and not near what the reality will be (Vatican Radio admits that no one really knows how many people to expect).

The city is already becoming difficult to navigate as roads around the Basilica of St. Peter are being barricading and streets and sidewalks repaired (you never what to accomplish a task too early in Italy) and the other streets are filled with people. The number of taxis in the area of the Vatican basilica has increased considerably, leading me to guess that taxis have either been brought in from other cities in Italy or parts of Rome will suffer a shortage of taxis over the never five or six days. This afternoon I witnessed a taxi traffic jam: 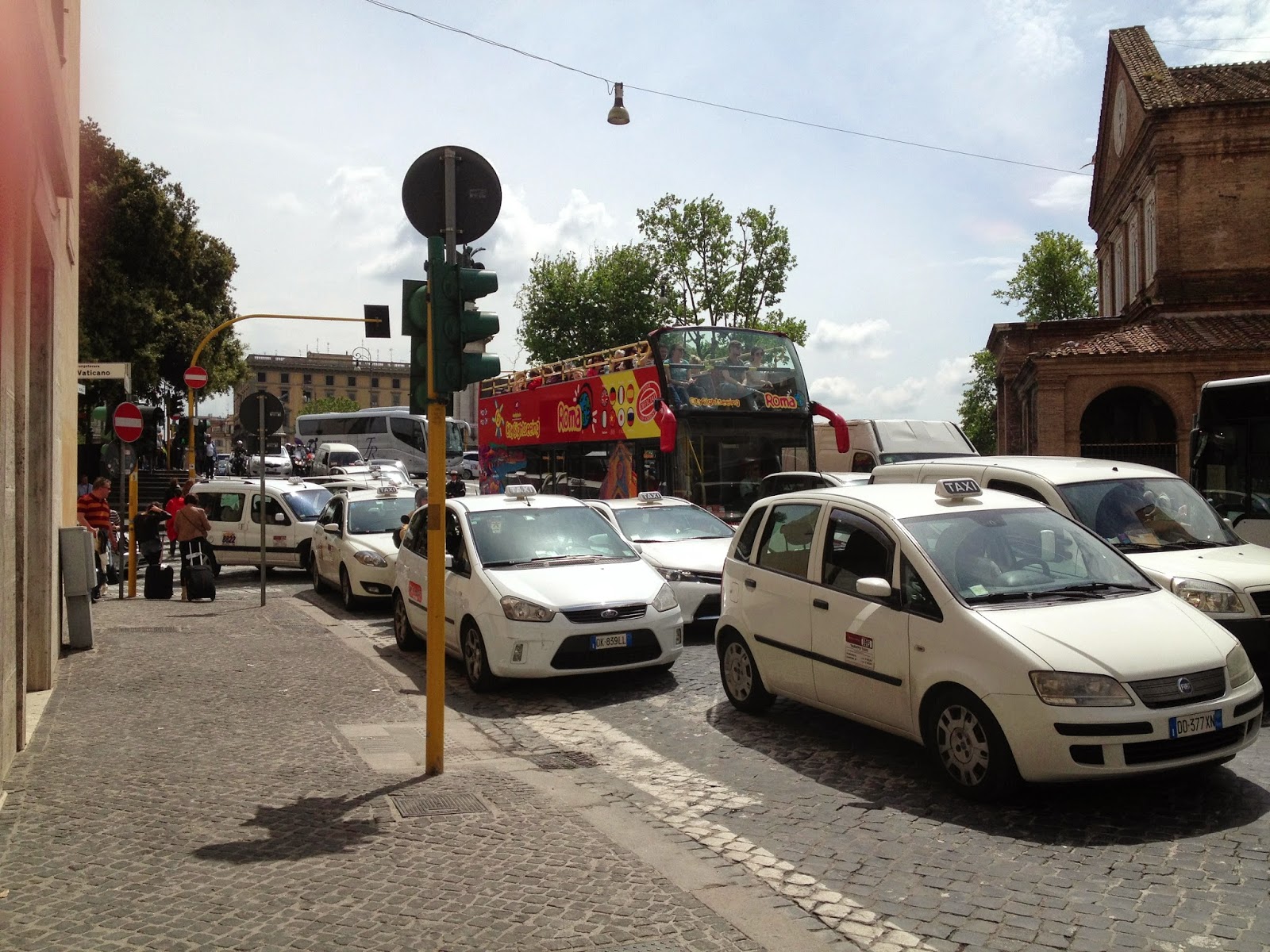 The logistical preparations alone for the canonizations are staggering:


"We are prepared to distribute almost 4 million plastic bottles of water, we have a massive plan to host almost 2,000 buses coming from all over Europe, and we will have shuttles moving back and forward in order not to have 2,000 huge buses circulating downtown in Rome," [Ignazio] Marino said [he is the mayor of Rome].


Some 2,000 police officers will be on the streets at any given time, says the mayor. More than 2,500 civil protection department volunteers will help with crowd control. Specially trained medical teams will staff 13 first aid stations. And a thousand chemical toilets have been set up near the Vatican and key tourist areas.


Rome's two subway lines and some buses will run nonstop, and 17 big screens will enable visitors to watch the ceremony throughout the city.

The total cost is estimated at $11 million, which will be partially covered by the national government. After all, the mayor says, this is not just a local Roman event.

"We are talking about an event I would classify as a global event," Marino said. "We will probably have 2 billion all over the planet who will watch Rome on that day through TV, radio and [the] Internet."


Over two and a half thousand volunteers will be working throughout the weekend to distribute four million free water bottles and hand out 150.000 free liturgical booklets. They’ll also be providing information about free access to the Mass, which will be from the river end of Via della Conciliazione, and disability assistance points, which will be located in three areas close to St Peter’s Square.

The entire zone around the Vatican will be closed to traffic but extra bus lines will be laid on from coach parking facilities and both the main Metro lines will be running non-stop from early on Saturday morning until after midnight on Sunday.

Being one who does not enjoy crowds (not even slightly), I had planned to join many Romans and flee the city this week to avoid the ensuing chaos - and watch the canonization online or on television - until my Bishop sent word that he is coming for the celebrations (I then thought it wise to stay in town).

Even so, I will more than likely still watch the canonization online in my room. Many weeks ago I requested a ticket and offered to assist with the distribution of Holy Communion, but have neither received a response or a ticket. This was just fine with me until I learned a few hours ago the His Holiness Benedict XVI will attend the canonization Mass (reports which seem to have vanished from both my Facebook and Twitter feeds).
Posted by Rev. Daren J. Zehnle, J.C.L., K.C.H.S. at 3:00 PM

Email ThisBlogThis!Share to TwitterShare to FacebookShare to Pinterest
Labels: #2popesaints