This past weekend we participated in the postcard campaign sponsored by the United States Conference of Catholic Bishops urging our Senators and Representatives to oppose the Freedom of Choice Act.
I took the postcards to the high school yesterday where I recruited the help of a few students to first label the postcards and then separate them. It was a lengthy and tedious process, but we know that it was also a worthy one. 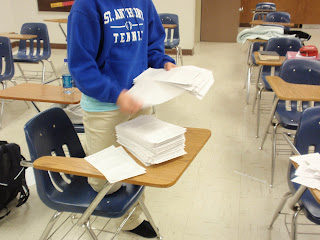 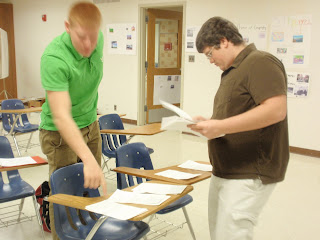 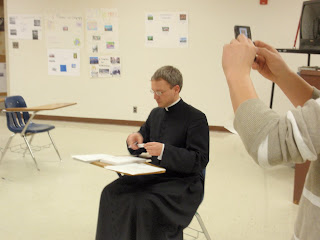 I'm not really sure how many postcards were filled out, but I do know that not a few people only filled out one card instead of three. We'll try to contact them and ask them to come in to fill out the ones they didn't already.

We didn't have school today so I finished up labeling and separating the cards on my own. 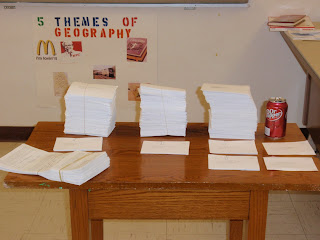 I wanted to find something to use for perspective and a can of Dr Pepper did just the trick. The big stack on the left will go to Senator Roland Burris, the big stack in the middle to Senator Richard Durbin, and the big stack on the right to Representative John Shimkus. The four small stacks on the right will be sent to the Senators and Representatives from Kansas (we must have had a few visitors) and the two single cards will go to other Illinois Representatives. The stack at the front of the table are cards that need to be completed because three cards weren't filled out by everyone. Those will take a bit of work.

It took quite a few pens to fill out so many cards, which were borrowed from local banks and businesses. When I say "borrowed," I mean it. One of our parishioners kindly went to the banks and businesses asking for pens; she also told them we would return the pens.
I don't expect we will have school tomorrow, so on Thursday I'll have some of the high school students help separate the pens. 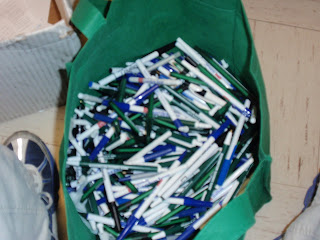