I think this year may be the last year that I bus out to the March for Life. Over the course of Tuesday, Wednesday, Thursday and Friday night I think I might have slept six hours. Maybe.
We bussed out of Effingham Tuesday evening and the opportunity was there to sleep on the bus. I don't sleep well on planes and I sleep better on planes than I do on busses.
Between late night games of Apples to Apples - along with late night conversations - little sleep was had while in the hotel; I simply - somehow - was not tired.
But now I am. We returned to Effingham yesterday about Noon. I laid down for a nap about 2:30 p.m. and awoke to the telephone about 7:00 p.m. I ate supper and watched a bit of British comeday and was asleep again by 9:00 p.m. The alarm woke me this morning at 5:00 a.m., to give me time to work on a homily - yet to be fully typed or recorded - before Mass at 8:30 a.m.
It feels as though I am jet lagged and, on top of it all, the snow is falling and my joints are hurting. Nevertheless, I know that if I go to bed now, I won't sleep tonight, which, in the long run, will not at all be good.
This afternoon I will attend the kickoff for our annual Catholic Schools Raffle (if you like, I'll sell you a ticket) from 2:00 p.m. - 3:00 p.m. Afterwards, I'll make a thirty-minute drive north to watch some of out students play soccer at 4:10 p.m. And when I return to Effingham I'll attend dinner with our Sesquicentennial Committee at the home of parishioners at 6:30 p.m. That should keep me awake long enough so I can crash about 9:00 p.m.
Next year, I think I fly to the March, that is, unless the laws are changed this year.
I'll post a few pictures from the March until I can post a bit more.
First, our group of 171 pilgrims from across the Diocese: 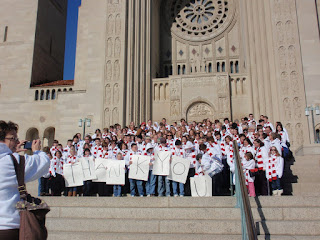 Second, a view of the procession at the Vigil Mass: 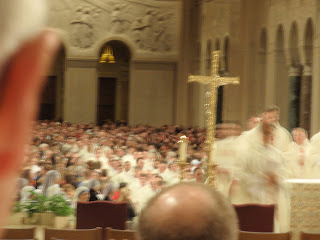 My kids counted 893 seminarians, deacons, priests and bishops in the procession.
Third, a view from the sanctuary (it gets pretty tight up there): 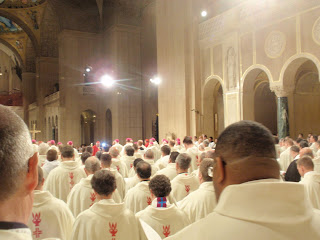 Fourth, my pilgrims and I during the March itself: 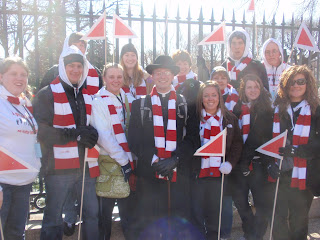 More to come later, but before I go: I'm told that I was on EWTN's coverage of the Vigil Mass, both during the procession and the recession. Did anyone happen to record the Mass digitally, or know how I might view those pieces?
Posted by Rev. Daren J. Zehnle, J.C.L., K.C.H.S. at 1:01 PM

Email ThisBlogThis!Share to TwitterShare to FacebookShare to Pinterest
Labels: March for Life