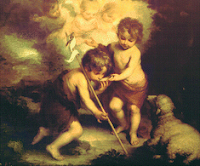 It was not until halfway through the afternoon yesterday that I realized that we don't, in fact, wear red on the Solemnity of the Nativity of Saint John the Baptist, but white.

This set me pondering the reason for this.

Typically, of course, we celebrate the dies natali of a saint, the day on which they enteral everlasting life, more commonly called the day we died. Using this logic we would wear red for Saint John the Baptist who suffered the martyr's death.

However, today we celebrate the birth of the Forerunner of the Lord, and not his death; thus, we wear white. But why?

I cannot help but wonder if we wear white because John came as "a light to the nations" (Isaiah 49:6). It is as though, as the Fathers so often spoke of the Church, that John reflects the coming Light of the World as the moon reflects the light of the sun (John 8:12).

In his encyclical, Spe salvi, Pope Benedict XVI noted that

The true stars of our life are the people who have lived good lives. They are lights of hope. Certainly, Jesus Christ is the true light, the sun that has risen above all the shadows of history. But to reach him we also need lights close by—people who shine with his light and so guide us along our way (49).

The Holy Father then reflects on Mary, the Star of the Sea, but I think the same could well be applied to the Baptizer.
John is the light that always shines on Christ, and for this reason we wear white on this, his Solemnity.
Posted by Rev. Daren J. Zehnle, J.C.L., K.C.H.S. at 9:31 PM