Is this the new normal in Rome?

Yesterday I was take a brief holiday in Scotland to visit a friend I have there and to enjoy something of the Scottish countryside, but a 30-bug of some sort made me too ill for travel. I was to bring with me a few gifts he could distribute to his parishioners and since I am feeling back up to speed today, I decided to package them up and take them to the Vatican post office (if I use the Italian post, they won't likely arrive in time for Christmas).

As I made my way through the streets of the Eternal City, it seemed to me that pedestrian traffic was abnormally light. Even in the Piazza Rotondu - just outside the Pantheon - there were very few people and no tourist groups about 10:30 a.m. Given the message for potential terrorist attacks at the Basilica of St. Peter and other sites in Rome released by the U.S. embassy on Wednesday, this did not surprise me too much, but how quiet the city seemed did.

Halfway across the Tiber River, I bumped into another priest who lives at the Casa Santa Maria. Since I do not tend to go towards the Vatican on Friday mornings, I asked if he thought the city was quieter than usual. He said it seemed normal to him so I took his word for it. We talked for a few minutes about the current situation in Rome and then continued on our separate ways.

As I approached the Vatican basilica, the amount of security present just outside of the Vatican City State caught me a bit off guard. I had not yet noticed much of the increased security across the city of Rome, but this morning I certainly saw it:

There is also a police car and van parked outside of the St. Peter's Square, but not as many as were there this morning. The barricades, too, are new. Yet that was not all of the increased security:

I cannot help but wonder if this will be the new normal in Rome, especially throughout the Jubilee year, which is to begin in less than three weeks.

Security has even been increased on the other side of the Vatican City State, as I discovered when I walked round the walls to buy a roll of packing tape at a local store: 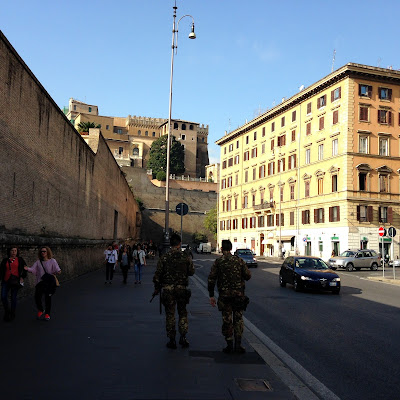 After I left my package with the Vatican post office, I made my back through the colonnade and left the smallest country in the world. As I began my walk home, I was struck by the emptiness of the space where a dozen or more taxis usually sit throughout the day: 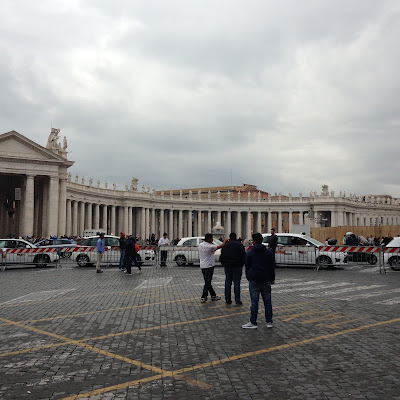 Those barricades, too, are new. I must say, though, the relatively open space is a nice touch in a crowded city.

As I approached Castel Sant'Angelo I saw police on horseback, something I've only seen before for parades: 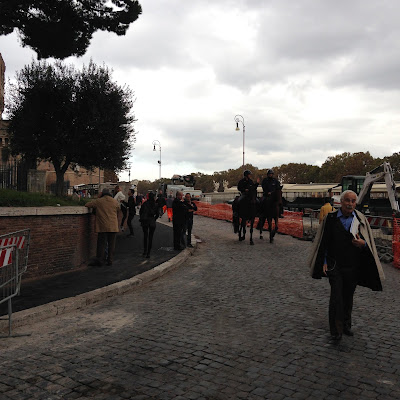 I saw nothing of these increased security measures when I walked to St. Peter's yesterday afternoon.

Upon return to my room, I learned from a story at The Local Italy that my initial suspicion might have been correct after all:

The cobbled streets and alleys in Rome’s centre have felt unusually quiet and the ambiance subdued over the past few days, even more so since the announcement late on Wednesday about the FBI’s warning, a police officer patrolling the area near Piazza Navona told The Local.

“There are definitely fewer people than usual, and I’ve noticed less and less since Friday,” he said.

“Since the FBI warning went public, more people seem to have stayed away. The attacks in Paris were at public places – restaurants, bars, clubs, normal places – this has made people more afraid.”

Earlier this week, Roberto Necci, the president of the Lazio region’s hotel association, said hotels in the capital saw an “above average” rise in room cancellations in the days following the Paris attacks, which killed 130 people.

“People are afraid,” he told Corriere.

“If this ‘war’ situation continues, then we can expect booking cancellations for the Jubilee too. Past experience teaches us this. The situation is worrying for everyone” [more].

I don't think I could say I am afraid, but I am certainly concerned and more aware than normal of my surroundings.

As an example, I have been thinking of visit the Capitoline Museum for a week or so now because I have been inside it in several years. I almost visited it this morning, until I remembered it was Friday. Ordinarily, I avoid museums and other tourist attractions on the weekends because of the crowds; today I did so because the increased numbers might attract an attack. It might be fear operating within me, but I'd like to think it's prudence.

The authorities do not know of any specific threats to the city of Rome at this time. Even the warning issued by the U.S. embassy seems to be of a general nature issued out of an abundance of caution. It should be remembered that the Islamic State first threatened the Eternal City more than a year ago and Rome remains safe. Clearly, this is not a time for panic, but for watchfulness.
Posted by Rev. Daren J. Zehnle, J.C.L., K.C.H.S. at 10:19 AM