During his homily on the life of Blessed Junipero Serra this afternoon at the Pontifical North American College in Rome, His Holiness Pope Francis made a passing reference to Saint Joseph Damien de Veuster. The mention of Father Damien caught my attention because we find ourselves now in the midst of the novena to prepare to celebrate his feast day on May 10th, 142 years after the Leper Priest first arrived at the Kalawao Settlement where he communicated so well the truth of the immeasurable depths of God's love.

In addition to my favorite Saint, Pope Francis also referenced many of the Saints of the Americas, calling them the ones "who have distinguished themselves through their various charisms." In a particular way, he said, the mark of Father Damien's charism is seen in his total giving of himself to "the suffering and the marginalized." 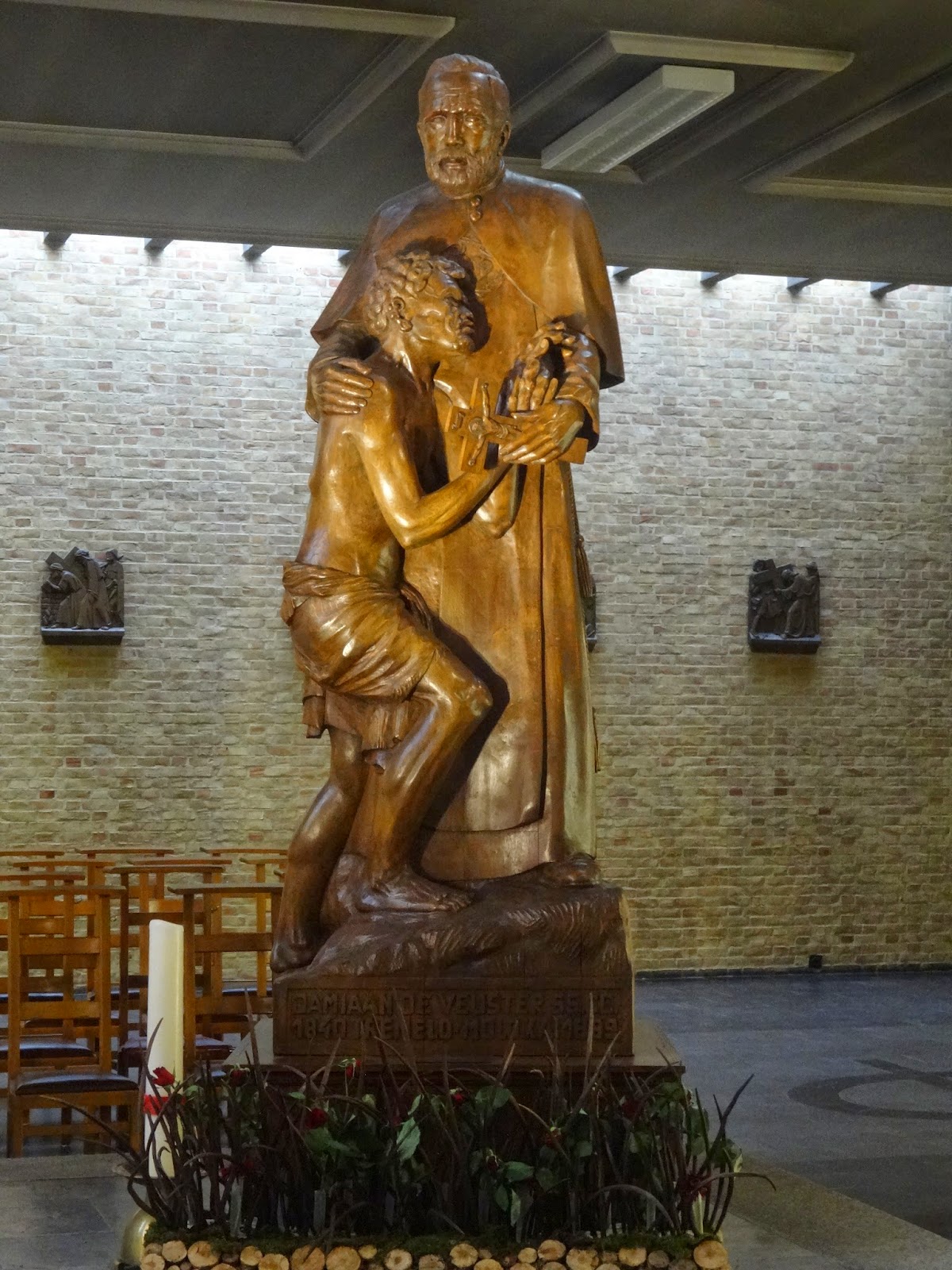 Most of us today have no real way to imagine the sufferings that Father Damien saw each day as he strove with all his strength to tend and heal the spiritual and physical wounds of his flock. The sufferings that we witness on a daily basis seems rather insignificant in comparison with what he saw. Even so, we too often grow faint and wish to give up; lacking the courage, the tenacity, or even the endurance to struggle on and to unite our sufferings to those of Jesus Christ, we only half-heartedly give of ourselves. How is it, then, that Father Damien continued his ministry to the suffering and the marginalized for sixteen years?

The prayer for this second day of the novena, which is directed to the Sacred Heart, answers this question in the particular graces it seeks. The one who prays this prayer asks the Lord Jesus


to grant me the favor of never becoming discouraged in the adversities of this life and furthermore, of being so strongly encouraged by heavenly hope that I might always live confidently in Your Merciful Love.

If prayed sincerely, this prayer is nothing less than a request that Jesus change our lives.

These two petitions are rooted firmly in the example of Father Damien. It was, after all, he who wrote to his sister Pauline on 14 July 1872, saying


When I get a little unwell, I congratulate myself that the end is near: but only I am content with my lot, only let perseverance crown my work.

Oh, my dear parents, the hope of meeting soon in glory not only our grandmother, Eugenie [his sister], and so many other faithful friends who have gone before us, but you and all the family, of whom I have made a sacrifice to God, is an incentive to me in moments of depression, helps me in my work, and makes me sigh every moment for the hour when my soul, freed from the prison of the body, shall go and join the choirs of the saints, to sing with them and with you the songs of Heaven to all eternity.

Because Father Damien himself received these two graces from the Lord, he was able to devote himself so heroically and generously to those forcibly separated from their families and friends on the island of Moloka'i.

When the Bishop requested four priests to take 3-month shifts at the leper settlement, it was Father Damien who replied,


Monseigneur, here are your new missioners; one of them could take my district, and if you will be kind enough to allow it, I will go to Molokai and labor for the poor lepers, whose wretched state of bodily and spiritual misfortune has often made my heart bleed within me.

The rest, as we say, is history.

As we continue to prepare to celebrate Damien Day next week, we would well to seriously ask ourselves if we are willing to distinguish ourselves in the service of the suffering and the marginalized, not for our own glory, but for the glory of God.

Right now our brothers and sisters in Iraq, Syria, Nigeria, and a host of other places throughout the world are suffering and marginalized because of their fidelity to Christ the Lord. In many ways, their fidelity in the midst of such great oppression and horrendous anguish suffering puts us to shame. Our we willing to distinguish ourselves in our love for them? Following the example of Saint Damien, may hearts bleed for them as look upon the bodily and spiritual misfortunes they endure each day as the world also watches, and does very little to help.
Posted by Rev. Daren J. Zehnle, J.C.L., K.C.H.S. at 4:10 PM

Email ThisBlogThis!Share to TwitterShare to FacebookShare to Pinterest
Labels: Damien of Molokai