O blessed transitus! Or how to die well

A simple, poor man died seven hundred and eighty-six years ago last night.  His name was Francis and he was from Assisi.  In some ways his death was like any other, yet it was also very much unlike any other death, and there is much from his death that we can learn. 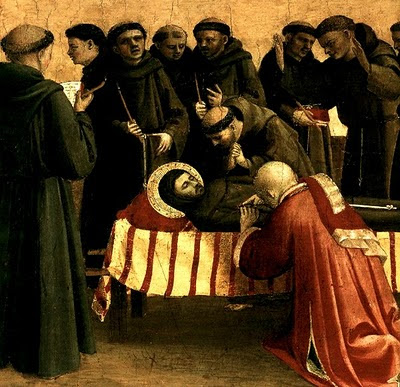 As he lay dying he said to Brother Elias: "I am summoned by God, o son.  I pardon all the offenses of my brothers, present and absent, and I absolve them insofar as I am able.  In announcing this, you should bless all of them for me" (Celano, First Life, II.8).

We often think of death as the great enemy to be avoided at all costs and we go to great lengths to pretend that for us death will not come.  If you think you don't try to avoid death at all costs, simply consider this: Each morning when I pray I ask the Lord if this is the day that I, too, will be summoned by God, and this I ask with joyful hope.  I welcome death, when at last it should come to me.

Most people become very uncomfortable at such a thought and call it morbid.  Some even suggest that I'm suicidal (which, I assure you, I am not).  On the contrary, I simply recognize the truth that I will die, that, as Saint Francis said, one day "our Sister Bodily Death, from whom no living man can escape," will come for me (The Canticle of Brother Sun, 12).  When she comes I do not want to be found unprepared; rather, I want to welcome her, knowing that our Lord is summoning me to his presence.

In such a summons, what is there to fear?  Saint Francis puts it succinctly: "Woe to those who die in mortal sin.  Blessed are those whom death will find in Your most holy will, for the second death shall do them no harm" (The Canticle of Brother Sun, 13).

After pardoning his brothers, Saint Francis asked that Saint John's account of the Passion of the Lord be read to him (cf. Celano, First Life, II.8.  He recognized that his own physical death would be a participation in the Death of Christ, but more than that: it would be also a share in the Resurrection of Christ because in Baptism Francis had already died.  So it is that the second death would do him no harm.  Do we have this same confidence in the grace of Baptism?
Posted by Rev. Daren J. Zehnle, J.C.L., K.C.H.S. at 6:54 AM