Upon landing at the airport in Kalaupapa we were met by Gloria from Damien Tours who was driving an old school bus. Climbing on board I felt like a little kid again, and my excitement and joy at finally being on Molokai and I my way to visit Father Damien’s only made me feel more childlike.

Joe and I were also met at the airport by four other persons for the Damien Tour who flew into Kalaupapa.

Gloria – a former patient - drove us into Kalaupapa where we collected four others who rode mules down the 3.8 mile path weaving down from the cliffs above Kalaupapa. Their guide down the trail, whose name I regret to say I cannot remember, then took over the tour and guided us around the island and drove us around at the same time. He was an excellent tour guide.

Kalaupapa is the second leper colony on Molokai. Mother Marianne Cope established Kalaupapa because the living conditions Kalawao – the first leper colony – were too difficult and she realized she could get supplies into the colony sooner from the new location, which was also more livable.

Kalaupapa, a very quaint and quiet place, is still home to sixteen former patients. Around eighty other people live at Kalaupapa. These others are workers and park employees, etc.

We stopped first at the local bar which serves alcohol beginning at 4:00 p.m. Being too early for a drink, we stopped for a rest room break and to purchase sodas, water, chips or ice cream. You’d be hard pressed to find any other food items to buy on the island.

We stopped next at St. Francis of Assisi church. We were given time to explore the church and to pray. Holy cards were available to us, as were a few pamphlets and movies. The movie Molokai, being filmed on island (along with Jurassic Park II and Jurassic Park III) comes very highly recommended by the residents of the island. I have yet to see it but I will watch it soon. 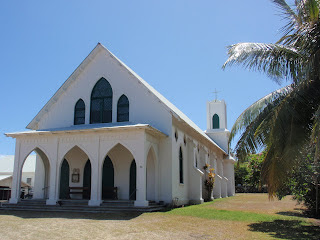 St. Francis of Assisi parish currently does not have a resident pastor, but is served by visiting “supply” priests. Some come from Belgium (Father Damien’s home country), Hawaii and many other places. Perhaps I could be one someday. If nothing else, Kalaupapa would be a perfect place to take my annual retreat (which I’ll probably be looking into).

Next to the church was a one room building that had pictures and articles relating to Father Damien along the walls. There was even a small green lizard of some kind climbing one of the walls.

We next stopped at the local book store which offered several good titles and even a few t-shirts. If you go to Kalaupapa, bring cash to buy books because credit cards are not accepted (and I don’t expect you’ll find an ATM). I wish I had known this before leaving Honolulu.

After touring Kalaupapa we drove to the site of the first settlement at Kalawao, the destination of this little pilgrimage. 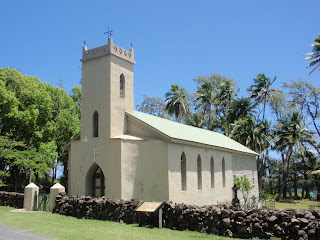 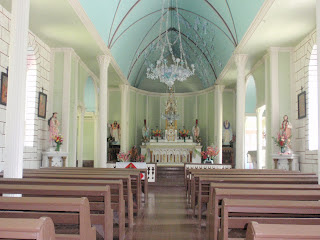 Blessed Father Damien’s original grave is located just to the right of the church of St. Philomena. In 1936, his remains were brought to Leuven, Belgium, near the town of his birth. In 1995, Blessed Damien’s right hand was sent to Hawaii, where it was buried in his original grave. 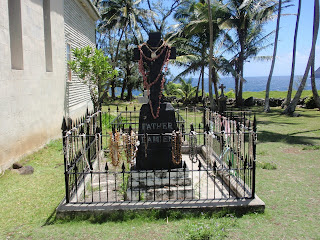 I cannot begin to describe what joy and peace flooded my soul as tears welled in my eyes as I knelt to pray at his grave. I asked Father Damien to show me how to be a good and holy priest, how to give myself generously and completely to the people entrusted to me, how to give myself in imitation of Christ. I’ll have more to say about this later.

I touched the two rosaries I have been carrying with me these past four weeks to his grave. One is from the Apostolic Nunciature in Washington, D.C. and has the coat of arms of Benedict XVI on the centerpiece and other the has a second class relic of St. Anthony of Padua in the centerpiece. These rosaries I also took the grave of Blessed Mary MacKillop, though I didn’t think to touch them to her grave.

After praying at his grave, I did what Christians have done for two thousand years: I picked up a rock (a lava rock), touched it to his grave, and put it in my backpack.

That’s about all I’ll say for now; it’s time for bed.