It's largely been an overcast day on O'ahu today, which, given that I actually slept in until 8:30 a.m. (!) helped contribute to a bit of a lazy day.

I was able finally to print the letter to the pilgrims I wrote Saturday night. I also found the pilgrim's addresses and have the letters ready to mail. Now I just need a post box.
A few hours ago I decided to take a drive up to the North Shore and back. It wasn't raining when I set out but it didn't take long before it did start raining.
Rain here in Hawaii is nothing at all like at home in the Midwest. There, it only rarely showers but more often than not pours down. There's nothing like the sound of a good rain rolling in over the prairie as the rain pounds on the ground.
In Hawaii, the rain is very fine and calm, almost more like a heavy mist than rain. This helps make Hawaii the land of rainbows.
Driving around this afternoon I saw quite a few rainbows, and even managed to take a picture of one: 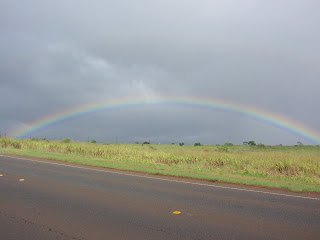 It was much more vivid and vibrant in reality than this picture shows.