What does it mean to "subsistit in"? 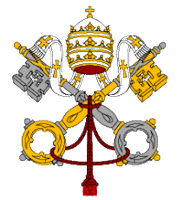 The Fathers of the Second Vatican Council declared, in the dogmatic constitution on the Church Lumen Gentium (8), that

Christ, the one Mediator, established and continually sustains here on earth His holy Church, the community of faith, hope and charity, as an entity with visible delineation (9*) through which He communicated truth and grace to all. But, the society structured with hierarchical organs and the Mystical Body of Christ, are not to be considered as two realities, nor are the visible assembly and the spiritual community, nor the earthly Church and the Church enriched with heavenly things; rather they form one complex reality which coalesces from a divine and a human element.(10*) For this reason, by no weak analogy, it is compared to the mystery of the incarnate Word. As the assumed nature inseparably united to Him, serves the divine Word as a living organ of salvation, so, in a similar way, does the visible social structure of the Church serve the Spirit of Christ, who vivifies it, in the building up of the body.(73) (11*)

This is the one Church of Christ which in the Creed is professed as one, holy, catholic and apostolic, (12*) which our Saviour, after His Resurrection, commissioned Peter to shepherd,(74) and him and the other apostles to extend and direct with authority,(75) which He erected for all ages as "the pillar and mainstay of the truth".(76) This Church constituted and organized in the world as a society, subsists in the Catholic Church, which is governed by the successor of Peter and by the Bishops in communion with him,(13*) although many elements of sanctification and of truth are found outside of its visible structure. These elements, as gifts belonging to the Church of Christ, are forces impelling toward catholic unity.

The parenthetical numbers represent footnotes in the original text not here copied.

Since the promulgation of this text in 1964 no little debate has ensued as to the meaning of the phrase "subsists in the Catholic Church." Some have claimed the Catholic Church is the one Church of Christ and others have claimed that Christ did not intend to found a Church at all; other answers have of course also fallen in between the two.
Today, His Emminence William Cardinal Levada, Prefect of the Congregation for the Doctrine of the Faith, issued five "Responses to Some Questions Regarding Certain Aspects of the Doctrine on the Church," seeking to clarify the debate.
Over these past four decades many have claimed that the Second Vatican Council changed the teachings of the Church and altered the faith. Correcting this view, Cardinal Levada quotes the eloquent words of the Holy Father Paul VI:

There is no better comment to make than to say that this promulgation really changes nothing of the traditional doctrine. What Christ willed, we also will. What was, still is. What the Church has taught down through the centuries, we also teach. In simple terms that which was assumed, is now explicit; that which was uncertain, is now clarified; that which was meditated upon, discussed and sometimes argued over, is now put together in one clear formulation.

Do have a read of the document. It will help to clarify much and, though it will likely receive little media attention, it is at least as important a document as Summorum Pontificum.
Posted by Rev. Daren J. Zehnle, J.C.L., K.C.H.S. at 6:45 AM