Ponderables from the Poverello 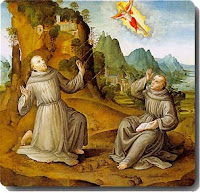 Take a corpse and put it where you will! You will see that it does not resist being moved, nor murmur about its position nor protest when it is cast aside. If it is placed on a throne, it will not raise its eyes up, but cast them down. If it is clothed in purple, it will look twice as pale. This is a truly obedient man. He does not judge why he is moved; he does not care where he is placed; he does not insist on being transferred. If he is raised to an office, he retains his customary humility. The more he is honored, the more unworthy he considers himself.

Email ThisBlogThis!Share to TwitterShare to FacebookShare to Pinterest
Labels: Francis of Assisi, Obedience, Ponderables from the Poverello