In the year 1205, Saint Francis of Assisi entered the church of San Damiano just outside his hometown to pray. Thomas of Celano, the Seraphic Father's biography, relates the pivotal event for us: 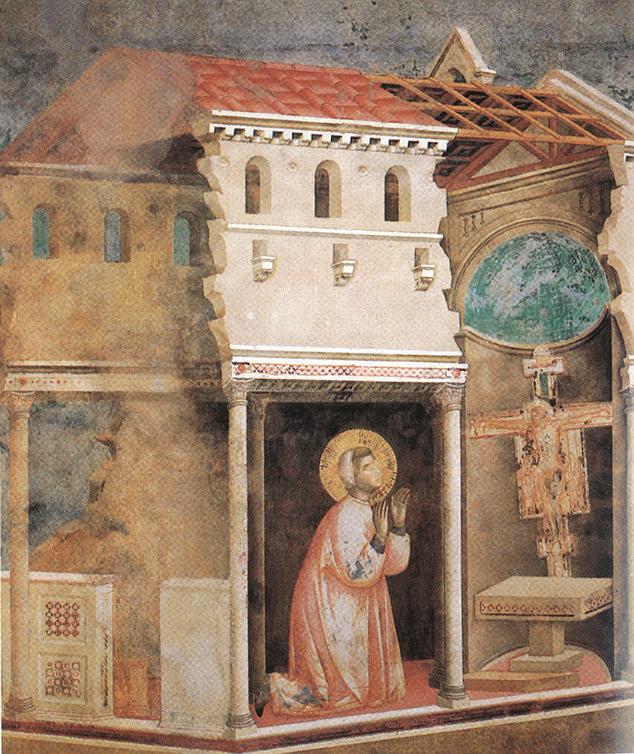 Touched by an unusual grace, he discovered that he was different than he had been when he had entered. Even though its lips were only painted, the image of Christ crucified spoke to this man who had been moved in this way - something unheard of over the centuries - and called him by name, "Francis," it said to him, "go and repair my house which, as you can see, is in ruins." The trembling young man was dumbfounded and felt faint, but he was immediately prepared to obey and everything became focused on that order (Second Life, I.VI.10).

Ever since that day, the San Damiano crucifix has been treasured by the Franciscan family and all those who seek to imitate Francis' love of the Crucified Love.

The miraculous image remained in the church of San Damiano for sometime until it was moved inside the Basilica of St. Clare inside the city walls, somewhere between 1257 and 1260, where it has remained until this very day. Next month, however, the San Damiano crucifix will return to the church for it was named for a few days' time:

Assisi, June 15-19, 2016, the Crucifix of San Damiano returns to the place where it spoke to Francis of Assisi.

In this Holy year, Pope Francisco invites everyone to join “in the great mystery of God’s mercy, contemplating the face of Christ.”

To respond to this appeal, the community of Friars Minor of San Damiano and the Poor Clares of proto-monastery of St. Clare, with the patronage of the Diocese of Assisi-Nocera Umbra-Gualdo Tadino and the municipality of Assisi, have desired to return the Crucifix of San Damiano, after almost eight centuries, to its original location.

It should be remembered that the face of Christ displayed in the San Damiano crucifix is the same face as that found on the Veil of Manoppello.

Likewise, if you missed my post exploring the centrality of the Veil of Manoppello with the history (and origin) of the jubilee, be sure to give it a read.
Posted by Rev. Daren J. Zehnle, J.C.L., K.C.H.S. at 5:50 AM