A pilgrimage to the cell of Saint Thomas More

Life in Rome is beginning to slow done even as it is picking up a bit of speed. By this I mean that our classes have now come to an end and we have a couple of weeks yet to prepare to for our final comprehensive exams (and pack for the long-awaited journey home).

Since we did not have classes last week Wednesday through Friday, I decided to make a second visit to England with the express purpose of visiting the cell in the Tower of London in which King Henry VIII held Saint Thomas More prisoner. 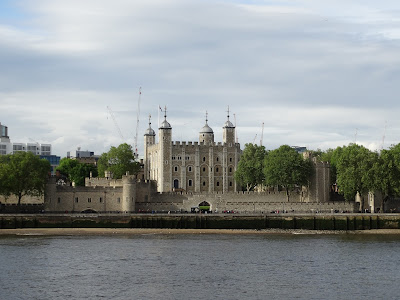 Access to this cell is not part of the usual admission to the Tower complex (because you have to pass through the Governor's house to enter the cell) so I made arrangements for this pilgrimage in advance to take place at 11:00 a.m. a week ago today.

One of the Yeoman Warders gave me a brief tour of the Tower of London before escorting me to Saint Thomas' cell: 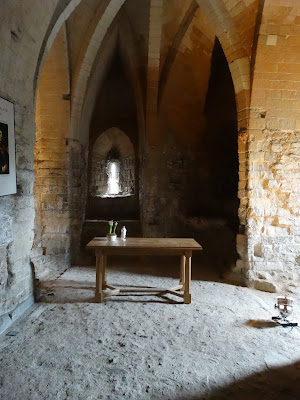 We do not know what this cell would have looked like during the fifteen months Saint Thomas was held here, though it likely had many of the pleasantries enjoyed by those of means, such as furniture, wall-hangings, and a rug on the floor. Over the years since his martyrdom, pilgrims are suspected of having chipped away at the walls and the floors for relics to bring him. I suspect the vaulting that still remains gives some indication of what the cell would have been like: 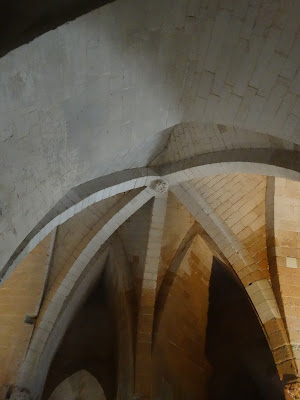 He was certainly not kept in your average dungeon. The Tower of London, after all, was both a royal palace and only housed prisoners of status; commoners - like William Wallace - would never have been housed in the Tower.

Even so, his imprisonment cannot have been easy. After talking a bit about the relationship between King Henry and Saint Thomas, the Yeoman Warder politely excused himself for a few minutes to allow me time for personal prayer. After being alone in the cell for perhaps one minute, I could already feel that even in relative comfort, this would not have been easy. I could hear conversations from the tourists walking by outside the Bell Tower in which he was imprisoned. I could hear birds chirping outside the Tower. I could hear footsteps and voices from the hallway and rooms just outside the cell. What must it have been like to hear the approach of voices and of footsteps for fifteen months, never quite knowing if someone was coming to visit him or to tell him of sentence of death (which, from his writings, he seems to have suspected would be handed down for some time). Just thinking about how hard it must have been for him not to give in simply to be with his loved ones gave me an even greater respect and admiration for this man of truly heroic virtue.

When he was first imprisoned, Saint Thomas had something of a comfortable life in the Tower (as far as prisons go). He had a servant to attend him, plenty of books and writing materials, and could receive visiting family and friends with ease.

However, as the weeks turned to months and still the former Lord High Chancellor of England would not affirm King Henry as head of the Church in England, the monarch had one nicety after another taken from Saint Thomas until he was left only with the shirt on his back.

This particular cell was initially built as a cellar and the temperature in the chamber - even today - is noticeably cooler than the hallway and rooms just outside it. Moreover, it is composed of a couple of different areas:

From the above window, Saint Thomas may not have been able to see the actual execution of his friend Saint John Fisher, Bishop of Rochester and the only Bishop in England to stand against the king, (and who was imprisoned in the cell above Saint Thomas and with whom he communicated by letter) on 22 July 1535, but he certainly would have been able to see the assembled crowds and hear their cheers and cries. Everything he heard and saw must have stayed with him until he was executed two weeks later.

As I stood in his cell contemplating the importance of his witness not only the true dignity and reality of marriage, but also to the independence of the Church, I could not help but recall part of the testimony he gave to Master Secretary Cromwell in the Tower on 2 May 1535: 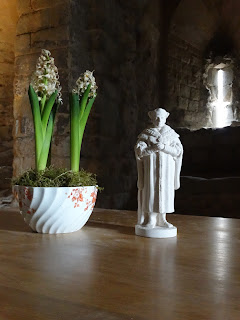 I do nobody harm, I say none harm, I think none harm, but wish everybody good. And if this be not enough to keep a man alive, in good faith, I long not to live. And I am dying already, and have since I came here been divers[e] times in the case that I thought to die within one hour, and I thank our Lord I was never sorry for it, but rather sorry when I saw the pang past. And therefore my poor body is at the King's pleasure; would God my death might do him good.

Saint Thomas had spent most every Friday of his adult life - even while serving as Chancellor - in prayer, contemplating the Passion of the Lord and many of his spiritual writings offer us some of the fruit of his prayer. It is this habit of mediating on the Crucified Lord that sustained Saint Thomas in his imprisonment.

After he resigned the office of Lord High Chancellor to retire in peace to his family, Saint Thomas composed his intended epitaph for his grave (to squelch rumors that King Henry forced his resignation), which he concluded with these words:

That he [Thomas] may not have erected this tomb in vain while still alive, and that he may not shudder with fear at the thought of encroaching death, but may go to meet it gladly, with longing for Christ, and that he may find death not completely a death for himself but rather the gateway to a happier life, I beg you, kind reader, attend him with your prayers while he still lives and also when he has done with life.

His mortal remains were never placed within this tomb. 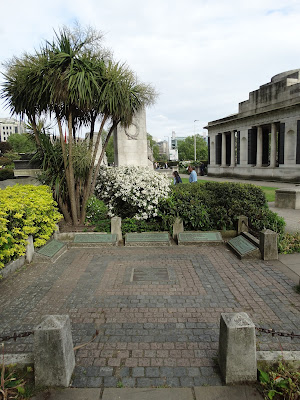 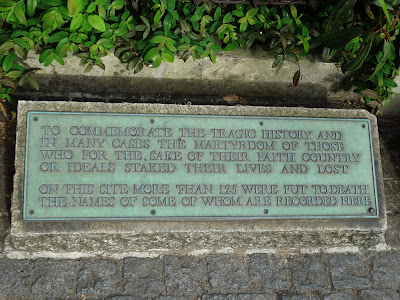 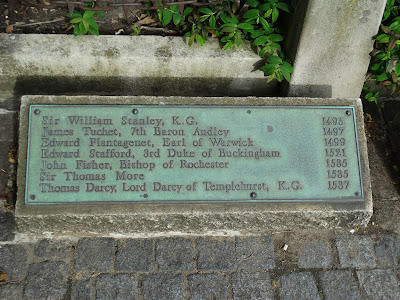 Before the executioner's axe struck off his head, Saint Thomas was, as per the custom, to say a few final words. The Paris Newsletter's account of his execution, provides these last words for us, of which I wish to highlight these:

I know well that the reason why you have condemned me is because I have never been willing to consent to the King's second marriage; but I hope in the divine goodness and mercy, that as St. Paul and St. Stephen whom he persecuted are now friends in Paradise, so we, though differing in his world, shall be united in perfect charity in the other. I pray God to protect the King and give him good counsel.

These are truly the words of a saint and show us how to forgive our enemies.

After his execution, Saint Thomas' head was impaled on a pike and displayed on Tower Bridge to serve as a warning to others (his daughter, Margaret, later bribed one of the guards and received his head, which is now buried in the church of Saint Dunstan in Canterbury in the Roper family's vault). Saint Thomas body was hauled back inside the Tower and buried - with 1,500 other bodies - beneath the floor of the Chapel Royal.

Some time later, repairs were ordered to the Chapel Royal and, in order to install a heating system, the bones of these 1,500 executed persons were removed and interred in a common crypt within the Chapel Royal.

Because there was no way to determine which bones belonged to Saint Thomas, a memorial tomb and shrine was built in his honor next to this large crypt: 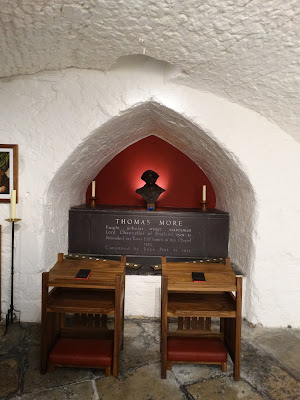 Beside the memorial hang portaits of Saints John Fisher and Thomas More, above the latter's prayer book, which lies open to the Veni Creator Spiritus: 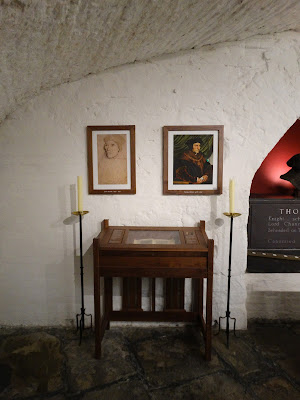 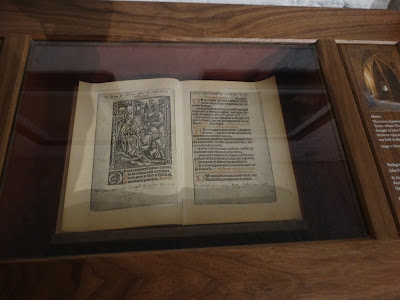 The entire pilgrimage within the Tower to the cell and crypt (including the tour) lasted just one hour, but left a very deep impression on my heart. I am deeply grateful to the Yeoman Warders for their many kindnesses to me and for allowing me to make this pilgrimage.
Posted by Rev. Daren J. Zehnle, J.C.L., K.C.H.S. at 3:20 PM