Homily for the Solemnity of the Epiphany of the Lord

The Solemnity of the Epiphany of the Lord


The Cathedral Basilica of Our Lady of Peace 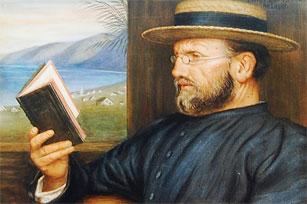 In addition to being the liturgical celebration of the Epiphany – the manifestation – of the Lord Jesus Christ to the nations, today is also the birthday of two of my favorite people. Born in 1840, a young boy in Belgium took great delight watching the sheep in the fields and felt the Lord call him to serve his people as a priest. A bit headstrong and unafraid of hard work, he joined the Congregation of the Sacred Hearts of Jesus and Mary and took his brother’s place in the mission in the Sandwich Islands. His family called him Jef, but to others he was known as Joseph de Veuster. we know him, of course, as Saint Damien of Moloka’i, but we do not celebrate his birthday today. Curiously, we do not celebrate his birthday into eternal life (15 April 1889), either, as we do with other saints, but rather the day he first landed at Kalaupapa, 10 May 1873. 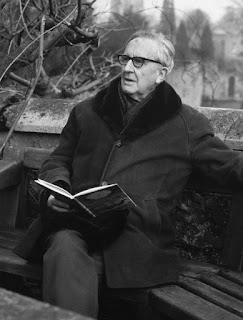 The other person was born in 1892 in Bloemfontein, South Africa and moved to England as a young boy after his father died. With his mother and his siblings, he then converted to Catholicism and endured persecution from his family. Following the death of his mother when he was ten years old, he came under the care of Father Francis Xavier Morgan, a priest of the oratory founded by Blessed John Henry Newman. The boy grew up and became a professor of Anglo-Saxon language and literature in Merton College at Oxford University. He is perhaps best known as the author of The Hobbit and The Lord of the Rings, but his other writings are slowly becoming better known, especially his reflections on his Catholic faith. He, of course, is John Ronald Reuel (J.R.R.) Tolkien.


In the spring of 1969, the daughter of his publisher wrote him asking his assistance for a school project to answer an important question: “What is the purpose of life?” He wrote back on May 20th, with this answer:

So it may be said that the chief purpose of life, for any one of us, is to increase according to our capacity our knowledge of God by all the means we have, and to be moved by it to praise and thanks. To do as we say in the Gloria in Excelsis: Laudamus te, benedicams te, adoramus te, glorificamus te, gratias tibi propter magnam gloriam. We praise you, we call you holy, we worship you, we proclaim your glory, we thank you for the greatness of your splendor.[1]


We know that we cannot love that which we do not know. Increasing our knowledge of God, then, leads to a greater love of God and the love of God brings us happiness. What greater purpose of life could we imagine?

Given the liturgical celebration of the day, we have to ask why the Magi looked up into the heavens, studying and observing the movements of the stars and planets. Was it not to increase their knowledge of God and discover the purpose and the meaning of life?


As the star heralding the Birth of the newborn King of the Jews rose in the heavens, how many people saw it? Though many historians and astronomers today try to find it in the conjunctions of planets and the movement of comets, it was no ordinary star, no ordinary planet, and must, therefore, have been seen by many people. We know it was no natural star because it could both move across the arc of the sky and hover in one place; this star was supernatural and, as such, it could hardly have been missed, especially in a day with no electric lights or other electronic distractions.


Of all the people that must have – or least should have -seen the Star of Bethlehem, Saint Matthew only tells us that it was seen by the Magi, that they knew what it signaled, and that they followed it (cf. Matthew 2:2). If others saw and did what the Magi saw and did, the Evangelist would surely have noted – at least in passing – the groups or crowds doing the same.


How can it be that the star only aroused curiosity in these men from the East? Could it be that they were the only ones to notice that the “glory of the Lord [shone] upon [them]” (Isaiah 60:1). Others may have seen the star and ignored it, not realizing what it was, but not the Magi. News of their questioning – and therefore news also of what the star signaled – even reached the ears of King Herod (cf. Matthew 2:1-3). Why, then, did no one else go out to see the Christ Child, to meet him, to pay homage to him, to embrace him, and entrust themselves to him? Why did they not “raise [their] eyes and look about” (Isaiah60:4)?


The Magi saw the star at its rising, which means they must have been searching diligently for it, even if they did not at first fully understand what it was. Because God does not wish to overpower us but to invite us into a relationship of love, the light of the star was not blinding, but gentle; it shone as a humble invitation to all who saw it, to who had not become listless but still longed for the answer to the question, What is the purpose of life? 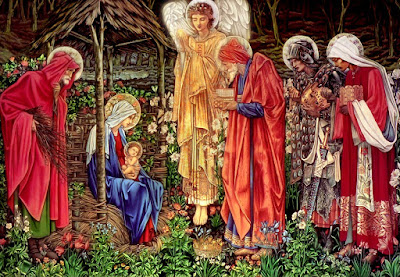 Entering the house they “saw the Child and Mary, his mother” (Matthew 2:11). As we heard on Christmas Day, “In the beginning was the Word, and the Word was with God, and the Word was God” (John 1:1). This Word, Jesus, “became flesh and dwelt among us, full of grace and truth” (John 1:14). It as this Word the Magi saw and this Word before whom they lay prostrate.


In Greek philosophy, the Word – the Logos – referred not simply to a noun or verb, but more importantly to the reason creating and sustaining everything that is. As they fell to the ground before the Infant King, the Magi no longer looked to the stars for the meaning and purpose of life, but to the very Creator of those stars present before them (cf. Matthew 2:11). So must it be with us: If we wish to discover the meaning and purpose of our lives, the reason for which we were created, we, too, can only find it in the Holy Child of Bethlehem, in Him who is the Holy Eucharist.


The Magi returned home “by another way” not only because they feared the wrath of King Herod, but because they simply could not return by the same way (Matthew2:12). In their encounter with the Christ Child, everything changed for them. They found their purpose in knowing, loving, and serving the Word made flesh, the newborn King of the Jews, and so they could not return by the way they came. They themselves were no longer the same. They shone with the radiance of the Lord, and were moved to give him thanks and praise through their very lives (cf. Isaiah 60:3).


Is this not what happened with Father Damien? He did not look to the stars for the purpose of life, but looked for it in the Mystical Body of Christ; he looked for the purpose and meaning of life in the exiles at Kalawao. By zealously dedicating himself to their care and salvation, he increased his knowledge of God and was also moved to give praise and thanks to God. We can be certain that Father Damien discovered the meaning and purpose of life in the faces of those joined to their Creator in Baptism because he said, “My greatest pleasure is to serve the Lord in his poor children rejected by other people.”


In the same way, we, too, must bow before the Child of Bethlehem and make a gift of ourselves to him and to his people. In him alone will we find the meaning and purpose of life. Only by increasing our knowledge of him will we come to love him more and more and find our greatest pleasure in praising and thanking him.


By the intercession of the Holy Magi and of Father Damien, may each of us search diligently for the Lord, rejoice in finding him, and manifest him to others so that all people might walk joyfully in the light of his love. Amen!