Archbishop Ganswein: The face of Christ is the most precious treasure of all the earth

The text of the homily His Excellency the Most Reverend Georg Ganswein, Prefect of the Papal Household and Secretary to Pope Emeritus Benedict XVI, preached last evening in the church of Santo Spirito in Sassia in connection with the pilgrimage from Manoppello was sent to me this afternoon. Here follows my translation from the original Italian text.


Update: I have added a photograph of Archbishop Ganswein blessing the faithful with the image of the Volto Santo at the end of the Mass. 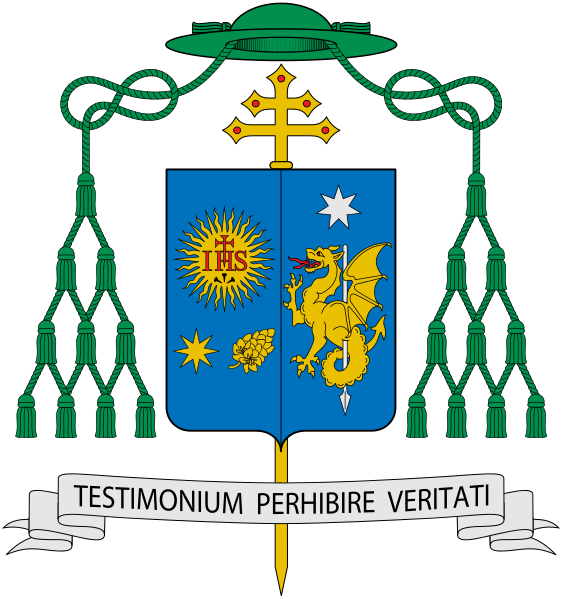 
The Sunday of today is called Omnis Terra, according to the words of Psalm 65 that we heard at the beginning of the Holy Mass: “Omnis terra adoret te, Deus, et psallat tibi!” (All the earth shall bow down before you, O God, and shall sing to you”). This Sunday was called this eight hundred years ago, as well; and even then, as today, the Gospel of the wedding of Cana was proclaimed in all Catholic churches. Since then empires have waned, swept away like the leaves of autumn; the Church has seen the succession of ninety-two popes; violent revolutions and wars have shaken Europe; and fatal divisions have torn Christianity. So the tranquility with which, in the liturgy of this Sunday, we sing today as then, seems almost a miracle: Praise the Lord, all you peoples!


In this praise we make today, however, we also remember the fact that here 808 years ago, for the first time, Pope Innocent III brought the Holy Sudarium of Christ in procession from Saint Peter to Santo Spirito. It is this holy veil that shows “the human face of God,” of which Pope Benedict XVI never tired of talking; that is “the living face of the mercy of the Father” to which Pope Francis has dedicated this Year of jubilee. And already, in January of the year 1208, that divine face of God which, in this church, was connected to the concrete mercy of men; this church which then, in 1994, Saint John Paul II dedicated to the “Divine mercy,” in honor of Saint Faustina Kowalska, whose relics we will venerate. The Polish Pope was also a clairvoyant and once more we experience it here today.


In fact, 808 years ago, in this very first procession, Pope Innocent III established that the holy image was not carried by the nobles of Rome, but by the infirm pilgrims and by the poor of the city, whose more important residences already were the hospital of the Holy Spirit. He also ordered that the pontifical almoner, drawing from Peter’s Pence, hand out three denarii to each of the three hundred sick and the one thousand poor invited to assist in the ceremony and came from all over the city: one denarius for bread, one for wine, and the third for meat. He, moreover, tied sound indulgences to the visit of the “true image” and to the participation in the related procession.


In fact, it was an anticipation of the Holy Year that only much later, in 1300, that they were introduced at Rome by Boniface VIII. All of this began right here!

Since then the processions and the expositions of the Holy Veil never had an end until the modern age. Innumerable pilgrims The pilgrims who wanted to contemplate at Rome the face of God were soon innumerable. Subsequently, it was in one of these processions that Dante learned to know the face of God. It is the face in front of which ends “the cosmic excursion” of the Divine Comedy, as Pope Benedict XVI said ten years ago, when he presented his encyclical Deus caritas est. It is the face of love, “that moves the sun and the other stars,” as Dante has written in the most famous passage of Italian literature.

It is the love of God that rejoices for us as “the spouse for the spouse,” as we have just heard in the words from the prophet Isaiah; and it is the force of the Holy Spirit of whose diverse gifts Saint Paul just made us aware in this church of the Holy Spirit. And yet, in no other place did this Spirit speak more clearly and with more evidence as in the silent face of Christ, before which today here we are gathered.

Because “this is the vocation and the joy of all the baptized: to bring and to give Jesus to others,” as Pope Francis said this past January 3rd. But this is precisely what is given to us today so that we become witnesses, in the moment in which the courageous Capuchin brothers of Manoppello “lead and give Jesus” to us, in whose face God himself shows his face.

In conclusion, I would like to add just one thing on the Gospel of the wedding of Cana, on which many instructive things have already been said: that, in fact, you may still wonder that Jesus has made his public miracle precisly to the favor of marriage and of the family that today are now so endangered that Pope Francis dedicated two specific synods! Or better still, in the time of Christmas in which we are still, we can understand better that first miracle as a necessary broadening of the mystery of the incarnation of God. That, that it is only within a family that we become men and women! With a mother and a father and – if we are fortunate – with brothers and sisters. For this the Christian artists have always portrayed the face of Jesus referring to that of his mother, and vice versa. Because if God is the father of Jesus, his face must and can only resemble that of her. And it is right that this ancient face that today in an almost miraculous way has returned to Santo Spirito in Sassia, where it seems to be almost identical to the face of the Divine Mercy that is here venerated for more than two decades.

We see here a copy of that ancient original image that Pope Innocent III showed to the pilgrims and that for four hundred years has been kept in Abruzzo, on the Adriatic, in a peripheral zone of Italy, from where today for the first time it was brought back to the place in which its public cult began. From here, innumerable copies of the face of God that Christians knew were carried all over the world. And precisely in this lies the deeper sense of this moment. Before coming to Rome, the Holy Veil was kept at Constantinople, before that at Edessa, and again before that at Jerusalem. It is not possible, in fact, that that face be the property, be the treasure, of an individual, not even of the pope. It is the distinctive sign of Christians. Only we know that God has a face – how and who he is. For this, the face of Christ is the first, the most noble, and the most precious treasure of all Christianity, even more: of all the earth. Omnis terra! To this face we must always be open anew. Always as pilgrims; always towards the periphery; and always having before our eyes one objective: that moment in which we will be face to face before him.