The Roman Adventures of Flat Thomas and Father Daren


Back in the United States of America - and possibly elsewhere - there is, I gather, a popular children's book series about a character known as Flat Stanley, who was, as I understand it, flattened when a bulletin board fell on him and made capable of traveling through the postal system.

Some time ago, the son of one my good friends and fellow member of the Tuesday Night Supper Club wrote to me with a request:


I made a Flat Thomas and am sending me to visit you. I know you will take good care of me. Take me to some interesting, exciting, and fun places. Take pictures of me and tell me and my class about life in Rome, Italy. We like to learn about important places, people, animals, sporting events, jobs, food, entertainment, weather and you!

I wish I could really visit you but since I can't make it there right now, please have fun with Flat Thomas.

I don't believe I've done anything quite like this little project and actually felt quite silly fulfilling it, particularly when asking a member of the Pontifical Swiss Guard - who was polite and kind as they always are - for a picture with Flat Stanley. Still, it was fun and provided a good long walk around Rome.

My letter and pictures to Thomas follows, with the permission of his mother:

I was very glad that Flat You came to Rome to spend some time with me and see what life is like here in Rome. I hope that when you became flat, it wasn’t because a bulletin board fell on you! Today I was finally able to take you on a brief tour of what is today called the Eternal City, in part because Rome was founded 2,767 years ago.

We started our visit on a beautiful and sunny afternoon at what many consider to be the heart of Rome today, the Basilica of St. Peter:

A church dedicated to Saint Peter, the first Pope and Bishop of Rome, was first built on this site, the Vatican Hill, by the Emperor Constantine in the year 313. Today, thousands of people come to the Basilica each day to see the artistic beauty inside the church and to pray at the tomb of the Prince of the Apostles.

We next went to the left of the basilica to visit with the Swiss Guard, a specially trained group of men who protect the Successor of Saint Peter, the Pope:

From St. Peter’s we made our way across the Tiber River into the heart of ancient Rome to see one of most famous landmarks in the world, the Coliseum: 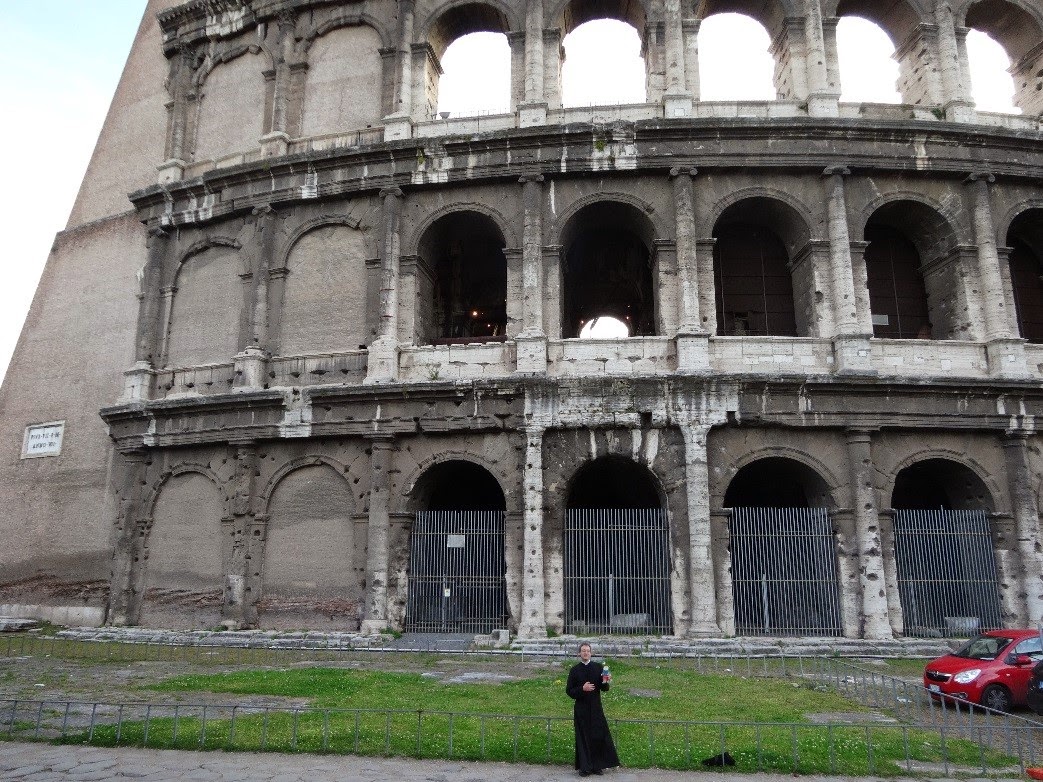 Built as a place where the people of Rome would gather to watch gladiator and animal fights, the Coliseum was completed in the year 80 and has stood the test of the time. It was covered inside and out with beautiful marble, much of which was used inside the Basilica of St. Peter and could hold about 50,000 people at a time.

We left the Coliseum to go to the Pantheon, but since the Trevi Fountain was on our way there, we stopped for a few minutes to admire to the beauty of one of the largest fountains in Rome: 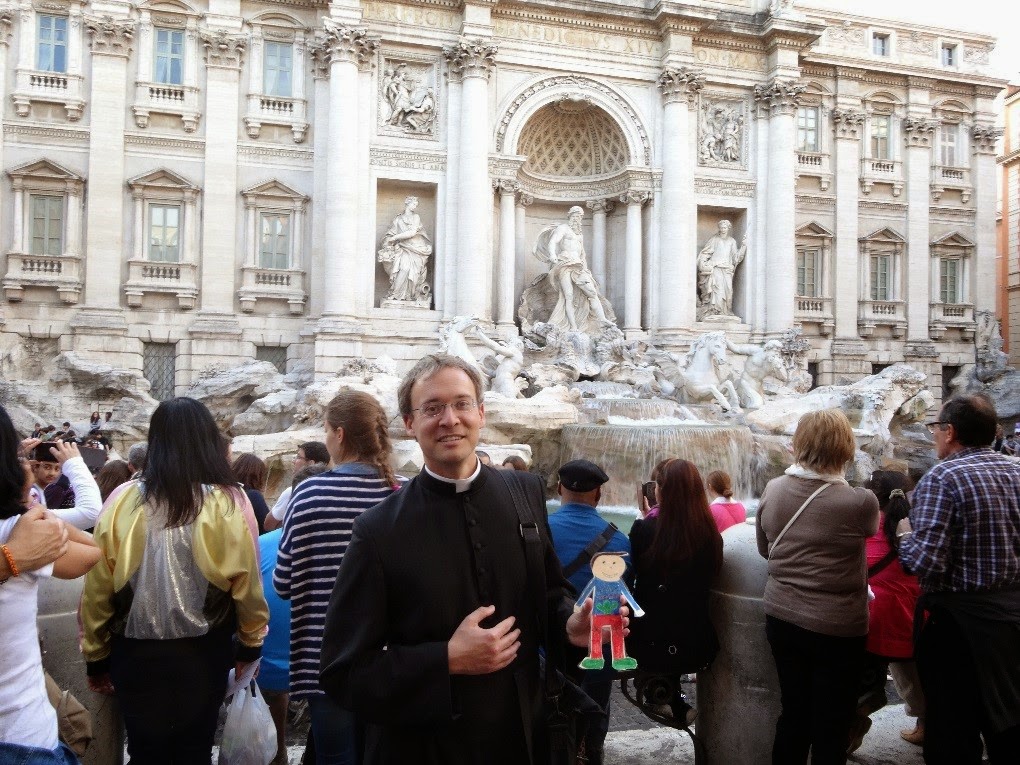 Although the fountain we see today was completed in 1629, there has been a fountain at this location since the year 19 to provide fresh water for the people of Rome. Similar fountains, though much smaller, are found throughout the city and people still use them to wash their hands and faces on warm days and even to refill their bottles (though you cannot do either at the Trevi Fountain).

Because there were so many other people trying to take pictures in front of the Trevi Fountain, we did not stay long and continued on our way to visit the Pantheon: 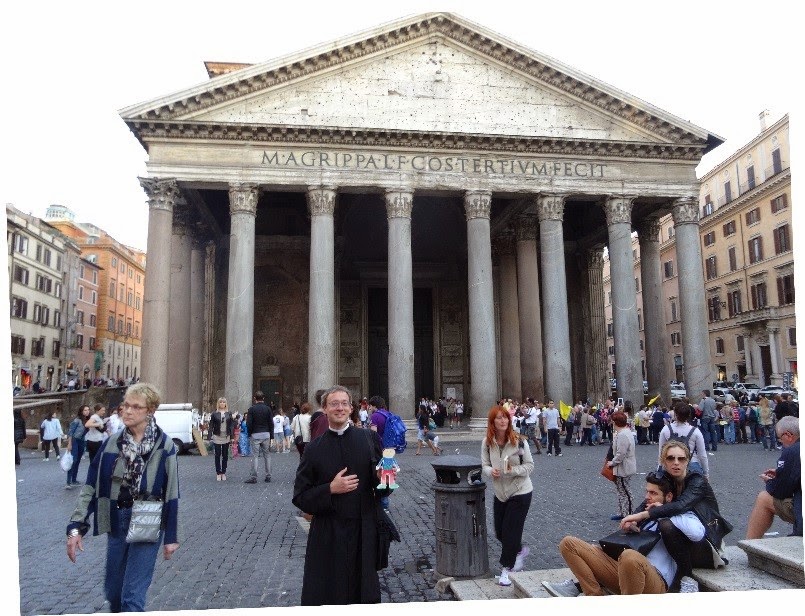 The Pantheon was built 27 years before Jesus was born and was initially dedicated to all of the gods of the pagan Roman people. Pope Boniface IV dedicated the Pantheon as a Catholic church in the year 607 and gave it the new name of Saint Mary of the Martyrs, although very few people call it that today.

After all of that walking around the streets of Rome, because we grew both tired and thirsty, we returned to my room to sit down for a bit and drink a Dr Pepper: 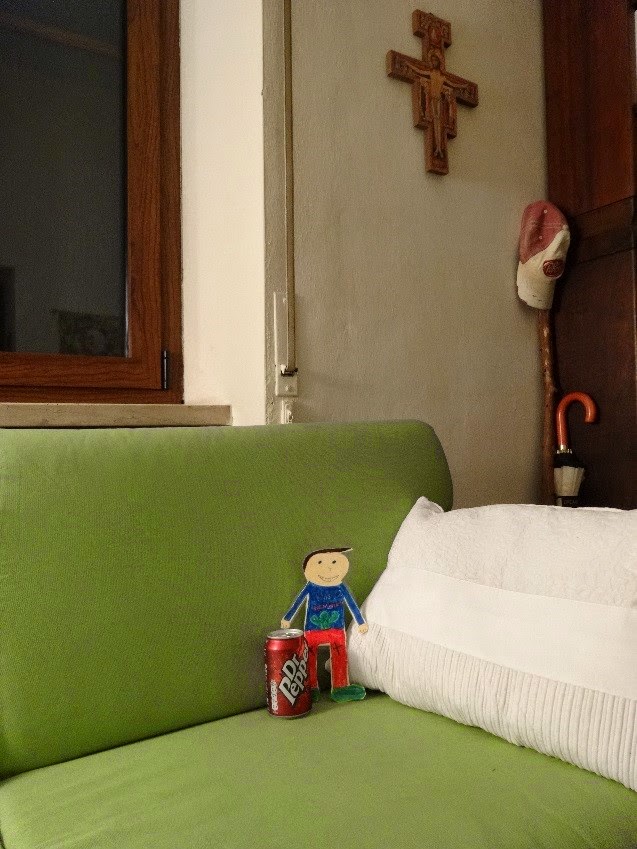 I hope you enjoyed visiting Rome, Thomas, as much as I enjoyed taking you on a tour of the city in which I now live and study. Maybe one day you can give me a tour of Keokuk. Please say “Hello” to your mom for me and remember me in your prayers; I will remember you and your classmates in my prayers.