Every year around Independence Day and Thanksgiving Day, Americans of all stripes bring out the same distorted notion of our history that President Obama referenced in this mornings in his remarks concerning the murder of the His Excellency Chris Stevens, the Ambassador of the United States of America to Libya.  President Obama said, in part:


Since our founding, the United States has been a nation that respects all faiths.

This is simply not true.  This country was established on the notion of religious freedom, but only for members of a particular faith.

To see the falsity of this statement (and those like it), one need only consider the difficulty of Catholic priests who stepped foot in Massachusetts on pain of death for no other reason than that we were Catholic priests.  One could also look to the Irish immigrants who were continually told they "need not apply" for work. 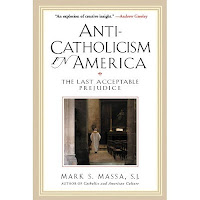 Anti-Catholicism in America: The Last Acceptable Prejudice, by Mark S. Massa, S.J. is an an excellent and readable account of the history of Catholics in this country.  It is a history that is too little known and too little discussed.

The history of the Catholic Church in the United States of America is a clear testimony that this country has, in fact, not been a nation that respects all faiths since its founding, and Catholicism is not the only faith whose history will bear this out.


We reject all efforts to denigrate the religious beliefs of others.

Yet his administration continues to denigrate the beliefs of Catholics regarding the dignity of human life and of procreation.

The President was right, though, when he said that "there is absolutely no justification to this type of senseless violence" that resulted in the death of the Ambassador, a member of the Foreign Service, and two others.  May the Lord grant them eternal rest and let perpetual light shine upon them.
Posted by Rev. Daren J. Zehnle, J.C.L., K.C.H.S. at 3:38 PM