His Excellency the Most Reverend Joseph N. Perry, Auxiliary Bishop of Chicago and Diocesan Postulator of the Cause for the Beatification and Canonization of the Servant of God Father Augustus Tolton yesterday spoke to a group of Quincyans - and others - about Father Tolton, saying, "He's your first citizen." 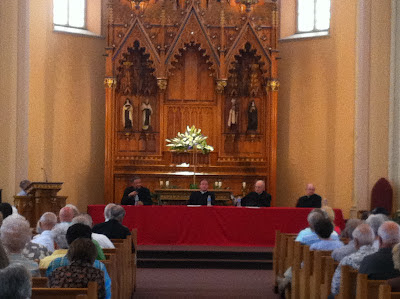 He spoke yesterday at a panel discussion on Father Tolton's life in Blessed Sacrament parish in Quincy, together with Fathers Roy Bauer, Peter Harman, and Joseph Zimmerman, O.S.F.  About 150 people came to listen to learn more about the Servant of God, to ask questions, and to collect a few devotional items.

Father Bauer spoke of the Tolton's life in Missouri before Father Gus' mother Martha Jane escaped from slavery when Gus was only seven years old.

He spoke largely of two ways that Father Tolton is an inspiration to us.  First, in his complete trust in the power of God when he was powerless, and, second, of his perseverence.  Father Tolton persevered over a fear of what was unknown and of what was known.

Bishop Perry spoke of the process of beatification and canonization.  The Cause for Father Tolton is progressing along nicely.  Last week he present two healings to the Holy See for consideration as miracles and it is expected that the archival record of Father Tolton's life will be completed within a year's time.