What was to be a cool and rainy afternoon turned into a beautiful warm and sunny one. 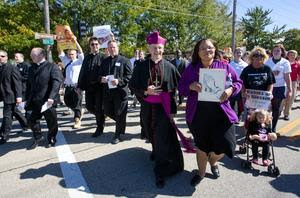 I am in the above picture on the far left. Another priest referred to me as "Father Security Guard."
The Catherdal of the Immaculate Conception was rather full - though, sadly, not packed - for the prayer service with members of various Christian traditions, from all ages and ethnic backgrounds. To see such a varied congregation was a clear witness to the Gospel of Life.

Molly Beck of the State Journal-Register wrote the following story in today's issue (with my emphases and comments):

Singing “We Shall Overcome,” hundreds of people marched through the streets of downtown Springfield Friday afternoon led by an heir to the legacy of Martin Luther King Jr. — not for race relations, but to protest what the walkers said they see as the U.S.’s foremost civil rights infringement: abortion.

Alveda King, a niece of the slain civil rights leader and an anti-abortion activist, spent her second day in Springfield with Bishop Thomas John Paprocki at the Cathedral of the Immaculate Conception. They asked about 400 people [that seems about right] in attendance to help efforts to curtail abortions in the United States.

“Will you be able to say that you defended life?” King asked during a prayer service Paprocki held at the cathedral. “Let our dream that every man, every woman, every girl … that we do all we can.”

Charlie Brown, 17, one of four Sacred Heart-Griffin students asked to participate in the service, read a quote from Martin Luther King asking for those in attendance to be concerned with “the nonviolent affirmation of the sacredness of all human life.”

Brown, who is black, said the significance of the day’s event for him was the promotion of anti-abortion efforts, not Alveda King’s appearance [a wise young man].

King, who lives in Atlanta, Ga., spoke about her uncle’s, father’s and grandfather’s work as pastors and said she knew they would support her years of work to end abortion.

On Thursday, Planned Parenthood released a statement saying King is using her uncle’s name to “further her position in the anti-abortion movement to the detriment of the health and well-being of women.”

The walkers headed out on foot about 2 p.m., going east on Lawrence Avenue and Cook Street, north on 11th Street and then west on Washington Street. The group, some holding signs, settled in front of the clinic [in part of the road and in a parking lot acros the street from Planned Parenthood] with a black pickup truck as home base.

Paprocki and King addressed the crowd again, asking Planned Parenthood to “bear witness to the truth” and offer women who seek their services the option of seeing an ultrasound.

“You say you want to give (patients) a clear choice — let them see their babies,” Paprocki said.

Pam Sutherland, vice president for public policy for Planned Parenthood of Illinois, responded that the organization does just that.

“It just shows how clueless the bishop is and Alveda King is about medical services that we provide,” she said. “Any patient who is considering abortion gets an ultrasound, and we ask if they would like to see it.

“I ask (Paprocki) to work with us to help reduce the need for abortion by making sure women have access to comprehensive birth control,” she said.

Sutherland said she also was concerned that Springfield police hadn’t notified clinic officials in advance of the rally [Why should they notify them of a peaceful protest? The event was publicized for at least a month], which blocked traffic to the Planned Parenthood building [traffic was not blocked; it was diverted from one direction, while access from the other direction was not blocked. Access to the parking lot of Planned Parenthood was easily made, and two cars left the sidewalk in front of the building while we were there].

“Ninety percent of our services are general health-care services, so I find it interesting that (protesters) would want to protest and block access to our patients,” Sutherland said. “They blocked women from getting good health care services today.”

In the next few days a video of the march will be published on the Diocesan web site, which I will link here. I'll also post a few pictures I took later today or tomorrow.
Photo source: Justin L. Fowler/State Journal-Register
Posted by Rev. Daren J. Zehnle, J.C.L., K.C.H.S. at 7:13 AM