Pope: Church is inclusive, but not at expense of truth 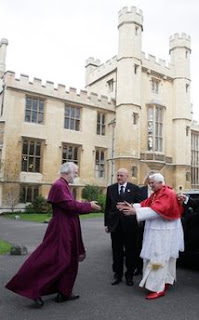 The text of his address follows, with my emphases:

It is a pleasure for me to be able to return the courtesy of the visits you have made to me in Rome by a fraternal visit to you here in your official residence. I thank you for your invitation and for the hospitality that you have so generously provided. I greet too the Anglican Bishops gathered here from different parts of the United Kingdom, my brother Bishops from the Catholic Dioceses of England, Wales and Scotland, and the ecumenical advisers who are present.

You have spoken, Your Grace, of the historic meeting that took place, almost thirty years ago, between two of our predecessors – Pope John Paul the Second and Archbishop Robert Runcie – in Canterbury Cathedral. There, in the very place where Saint Thomas of Canterbury bore witness to Christ by the shedding of his blood, they prayed together for the gift of unity among the followers of Christ. We continue today to pray for that gift, knowing that the unity Christ willed for his disciples will only come about in answer to prayer, through the action of the Holy Spirit, who ceaselessly renews the Church and guides her into the fullness of truth.

It is not my intention today to speak of the difficulties that the ecumenical path has encountered and continues to encounter. Those difficulties are well known to everyone here. Rather, I wish to join you in giving thanks for the deep friendship that has grown between us and for the remarkable progress that has been made in so many areas of dialogue during the forty years that have elapsed since the Anglican-Roman Catholic International Commission began its work. Let us entrust the fruits of that work to the Lord of the harvest, confident that he will bless our friendship with further significant growth.

The context in which dialogue takes place between the Anglican Communion and the Catholic Church has evolved in dramatic ways since the private meeting between Pope John XXIII and Archbishop Geoffrey Fisher in 1960. On the one hand, the surrounding culture is growing ever more distant from its Christian roots, despite a deep and widespread hunger for spiritual nourishment. On the other hand, the increasingly multicultural dimension of society, particularly marked in this country, brings with it the opportunity to encounter other religions. For us Christians this opens up the possibility of exploring, together with members of other religious traditions, ways of bearing witness to the transcendent dimension of the human person and the universal call to holiness, leading to the practice of virtue in our personal and social lives. Ecumenical cooperation in this task remains essential, and will surely bear fruit in promoting peace and harmony in a world that so often seems at risk of fragmentation.

At the same time, we Christians must never hesitate to proclaim our faith in the uniqueness of the salvation won for us by Christ, and to explore together a deeper understanding of the means he has placed at our disposal for attaining that salvation. God “wants all to be saved, and to come to the knowledge of the truth” (1 Tim 2:4), and that truth is nothing other than Jesus Christ, eternal Son of the Father, who has reconciled all things in himself by the power of his Cross. In fidelity to the Lord’s will, as expressed in that passage from Saint Paul’s First Letter to Timothy, we recognize that the Church is called to be inclusive, yet never at the expense of Christian truth. Herein lies the dilemma facing all who are genuinely committed to the ecumenical journey.

In the figure of John Henry Newman, who is to be beatified on Sunday, we celebrate a churchman whose ecclesial vision was nurtured by his Anglican background and matured during his many years of ordained ministry in the Church of England. He can teach us the virtues that ecumenism demands: on the one hand, he was moved to follow his conscience, even at great personal cost; and on the other hand, the warmth of his continued friendship with his former colleagues, led him to explore with them, in a truly eirenical spirit, the questions on which they differed, driven by a deep longing for unity in faith. Your Grace, in that same spirit of friendship, let us renew our determination to pursue the goal of unity in faith, hope, and love, in accordance with the will of our one Lord and Saviour Jesus Christ.

With these sentiments, I take my leave of you. May the grace of the Lord Jesus Christ and the love of God and the fellowship of the Holy Spirit be with you all (2 Cor 13:13).