The good folks at Zenit pass on the recently unveiled logo for the upcoming World Youth Day 2011 to be held in Madrid, Spain: 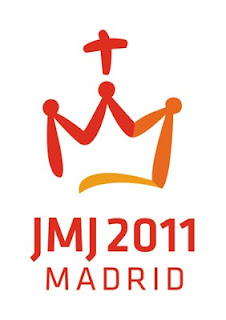 The Zenit article offers the following description of the image:

The logo designer, José Gil-Nogués, explained that the image symbolizes "youth of the whole world united to celebrate their faith together with the Pope, at the foot of the cross, and they form the crown of Our Lady of Almudena, patron of Madrid."

The crown, Gil-Nogués added, forms the "M" of Mary and of Madrid. And the cross, symbol of Christianity, presides over the event.

The message of the logo, the designer continued, is "a catechesis, an opportunity for evangelization: The quick and sure path to reach Christ is the Virgin Mary, Mother of God and of mankind. In Mary's faith, youth have the example and model for reaching Christ and fulfilling the primary goal of World Youth Day: to bring their message to the world."

"The logo has a firm and spontaneous stroke," Gil-Nogués suggested, "like youth of the 21st century. It is close, friendly, open. Joyful, carefree and positive."

"The use of a palette of warm colors -- red, orange and yellow -- transmits unmistakable warmth and friendliness, symbols of the identity of a city like Madrid, a nation like Spain. These colors also reflect the 'divine warmth' of Trinitarian Love."

What struck me immdiately about the logo was the lack of the anacronym WYD for World Youth Day. I have since learned that in Spanish speaking countries the title of WYD is not preferred. Instead the phrase "Jornada Mundial de la Juventad" is used, hence the anacronym JMJ on the logo.

The gathering of the world's youth is scheduled to take place 16-21 August 2011 and will have as it's theme, "Rooted and built up in Jesus Christ, firm in the faith" (cf. Colossians 2:7).

An official website for the event has been launched, though it is only in Spanish.
Posted by Rev. Daren J. Zehnle, J.C.L., K.C.H.S. at 9:19 AM

Email ThisBlogThis!Share to TwitterShare to FacebookShare to Pinterest
Labels: WYD 2011