It should come as no surprise that “at the heart of the Eucharistic celebration are the bread and wine that, by the words of Christ and the invocation of the Holy Spirit, become Christ’s Body and Blood.”[1] The bread and wine are brought to the altar from the offerings of our lives, all in keeping with the Lord Jesus’ command to “do this in memory of me” (Luke 22:19).

Jesus, of course, did not create his offering of bread and wine from whole cloth, as he it were, which he transformed through the power of his words, into his own Body and Blood. We find a foreshadowing, a prefiguration, of this offering of bread and wine in the Old Testament, beginning with the offering of Melchizedek, who was both priest and king of Salem. Saint Augustine recognized this when he called Melchizedek “a type of Christ.”[2] Indeed, Augustine went so far as to say that Melchizedek offered “the sacrifice which is now offered to God by Christians in the whole wide world…”[3] 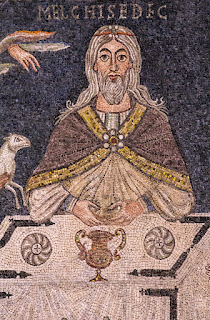 Melchizedek is a most mysterious figure. His name means “King of Righteousness,” and, although at that time God had only called Abraham, Melchizedek was not a pagan priest, but a priest of God Most High. In fact, the author of the Epistle to the Hebrews describes him as being “without father, mother, or ancestry, without beginning of days or end of life, thus made to resemble the Son of God, he remains a priest forever” (Hebrews 7:3). For this reason, the author goes on to say that Jesus is a “priest forever, according to the order of Melchizedek” (Hebrews 7:17; cf. Psalm 110:4).

What does it mean, though, to say that Melchizedek is without father, mother or ancestry, without beginning of days or end of life? This seems most strange, unless we remember that Melchizedek is a type, a foreshadowing of Christ. Saint John Chrysostom explains what this means, saying,

Both of these are marvels for us, but it is good for us to marvel at the ways of God.

What does it mean when the Epistle to the Hebrews speaks of Jesus, quoting the Psalm, as being a priest forever, according to the order of Melchizedek? Saint Augustine explains that Jesus is a priest forever, “not after the order of Aaron, for that order was to be taken away when the things shone forth that intimated beforehand by these shadows,” which is to say that the priesthood of Aaron was brought to its fulfillment in the self-offering of Jesus to the Father on the Cross.[5]

The Old Testament roots of the Eucharist, however, do not end with Melchizedek. Bread and wine

…received a new significance in the context of the Exodus: the unleavened bread that Israel eats every year at Passover commemorates the haste of the departure that liberated them from Egypt; the remembrance of the manna in the desert will always recall to Israel that it lives by the bread of the Word of God; their daily bread is the fruit of the promised land, the pledge of God's faithfulness to his promises

The "cup of blessing" at the end of the Jewish Passover meal adds to the festive joy of wine an eschatological dimension: the messianic expectation of the rebuilding of Jerusalem. When Jesus instituted the Eucharist, he gave a new and definitive meaning to the blessing of the bread and the cup.[7]

The Lord Jesus himself foreshadowed his institution of the Eucharist, as we see in the Gospel proclaimed today. His multiplication of the loaves demonstrates the superabundance of the tremendous gift he gave us and entrusted to his Church at the Last Supper.

From these foreshadowings we see that the Eucharist is given to us as a blessing, as a liberation, as sustenance, and as a promise of the life that is to come. Is it any wonder, then, that the saints have so loved the Eucharist, received such solace from the Eucharist, and spoke so movingly about the Eucharist?

Saint Damien of Moloka‘i, for example, who spent so many years among the lepers of Hawai‘i, said, 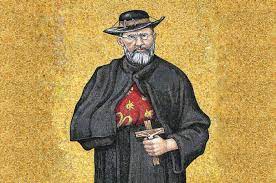 I find my consolation in the one and only companion who will never leave me, that is, our Divine Savior in the Holy Eucharist. . . .It is at the foot of the altar that we find the strength necessary in this isolation of ours. Without the Blessed Sacrament a position like mine would be unbearable. But, having Our Lord at my side, I continue always to be happy and content. . . . Jesus in the Blessed Sacrament is the most tender of friends with souls who seek to please Him. His goodness knows how to proportion itself to the smallest of His creatures as to the greatest of them. Be not afraid then in your solitary conversations, to tell Him of your miseries, your fears, your worries, of those who are dear to you, of your projects, and of your hopes. Do so with confidence and with an open heart.

These are deeply moving words that I pray each of us will come to understand and imitate through our own deepening love of the Eucharistic Lord.

Today, the Church in these United States of America embarks upon a three year Eucharistic Revival, promoted by the Bishops. This first year is the Diocesan phase, followed next year by the parish phase, and followed the year after by the national phase. Our own Diocese of Springfield in Illinois had already been planning a Year of the Eucharist, beginning with the Solemnity of the Immaculate Conception on December 8th. In these days of revival, let us beg the Lord Jesus to help us deepen our love for him in the Eucharist so that we, too, with the Saints, may be satisfied by him of earthly and heavenly desires. Amen.