The decline of American culture and politics, as seen in a Halloween parade

His Excellency the Most Reverend Charles J. Chaput, O.F.M. Conv., Archbishop of Philadelphia, gave the 2016 Tocqueville Lecture on Religious Liberty yesterday at the University of Notre Dame. He titled his lecture, "Sex, Family and the Liberty of the Church."

Within his remarks, Archbishop Chaput gave a rather blistering assessment of the current political situation in these United States of America (and it was not the first time he has done so in recent weeks): 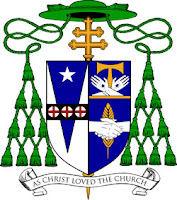 So where does that leave us?  The historian Henry Adams once described the practice of politics as “the systematic organization of hatreds.”  And there’s plenty in our current political season that invites cynicism.  But Christians don’t have that option.

I cannot say I disagree with his assessment. In fact, I think he has accurately described the current state of our political climate. The country I left three years ago when I began my studies in Rome is not the same country I returned to almost three months ago, and this saddens me greatly.

As it happens, I am one of those who sees one candidate as a belligerent demagogue and the other as a criminal liar. As such, I cannot, in good conscience, vote for either candidate of the two major parties; what your well-formed conscience tells you, I do not know.

I find myself thinking the same thought as Dr. Robert P. George, McCormick Professor of Jurisprudence at Princeton University, though he expresses it much more eloquently than I have previously managed to do:

As I've considered my options these past many months, I'm intrigued by the American Solidarity Party, which is currently in something of its infancy, though I think it has a promising future.

When he surveyed the political landscape, which is necessarily shaped by the moral landscape of the country, Archbishop Chaput made this excellent observation:


But here’s my larger point: We’ve reached a moment when our political thinking and vocabulary as a nation seem exhausted.  The real effect that we as individuals have on the government and political class that claim to represent us – the big mechanical Golem we call Washington — is so slight that it breeds indifference and anger.

As Christians, then, our political engagement needs to involve more than just wringing our hands and whining about the ugly choice we face in November.  It needs to be more than a search for better candidates and policies, or shrewder slogans.  The task of renewing a society is much more long term than a trip every few years to the voting booth.  And it requires a different kind of people.  It demands that we be different people.

Augustine said that complaining about the times makes no sense because we are the times.  And that means, in turn, that changing the country means first changing ourselves.

Be sure to read the entire text of the lecture he delivered at Notre Dame; you will not regret it.

This morning I was surprised to learn that the Halloween parade in Vandalia, Illinois - a town within the boundaries of the Diocese of Springfield in Illinois - will not involve the tossing of candy (or any candy, for that matter) this year. The decision was made by the Lion's Club, the organizing sponsor of the parade, after repeated warnings over the years. The reason for the decision is really quite reasonable:


The crowds have pushed further and further into the street requiring drivers of vehicles to constantly have to be on guard for children darting into the street to get that last elusive piece of candy.  Sadly, some parents actually push their children to run out and retrieve candy and some have created combative situations with crowd control personnel.  As has been stressed by the Lions in the past – this is extremely dangerous.  Large vehicles such as tractors and large 4 wheel drive trucks simply cannot see immediately in front of their vehicles [more].

Many people, both parents and children, will, I suspect, likely grumble and moan against the Lion's Club for this decision without ever realizing that they brought it upon themselves. This is, of course, what a self-centered culture leads to.