The Volto Santo and King Arthur?

Last evening, I sat down at my computer with the intention to finally sort through my e-mail inbox and finally clear it out. However, I became distracted by one particular e-mail from Paul Badde. He had sent an Italian transcript of an interview he had with His Eminence Kurt Cardinal Koch about the Volto Santo.

After translating the interview into English (I'll share the text with you later today), I remembered I had found a few references to the Veronica (as the Volto Santo had been called in Rome for nearly nine centuries) in a book given to me many years ago, The Age of Pilgrimage: The Medieval Journey to God by Jonathan Sumption.

Among these references were mentions of the badges - called vernicles - pilgrims to Rome would return home wearing. Being rather unfamiliar with the word vernicle, I discovered it is a Middle English variant of the Middle French veronique, which comes from the Latin veronica.

Sumption notes that the vernicle badge is mentioned by Geoffrey Chaucer in his The Canterbury Tales. Chaucer says in the prologue of the Pardoner that "a vernycle hadde he sowed upon his cappe" (685). A quick Google search found this image from the Ellesmere manuscript:

It is a bit difficult to make out the vernicle, but you can see the face of the badge resembles the Volto Santo.

Sumption also notes that the vernicle is mentioned by William Langland in his The Vision of Piers Plowman:


An hundred of ampulles on his hat seten,
Signes of Syse and shelles of Galice,
And many a crouch on his cloke, and keyes of Rome,
And the vernicle bifore, for men sholde knowe
And se bi hise signes whom he sought hadde (Passus V, 520-524).

It helps to read the above text out loud to note the ssimilarities with our modern English.

I had previously read about these badges which bore the image of the Volto Santo, but had not been able to find an image of one. So it was that I conducted a Google image search for vernicle and was rather surprised at what I found: 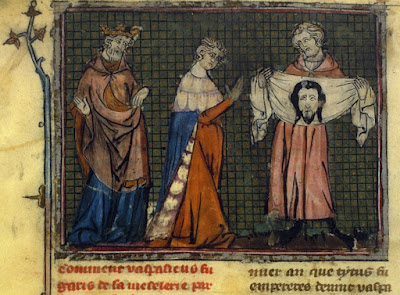 This is an image I had not seen before and it takes only a glance to see that the image bears a resemblance to the Veil of Manoppello; having seen other manuscript copies of the Volto Santo, this did not surprise me. It was the source of the image, however, that surprised me; it comes from an illuminated manuscript of the History of the Holy Grail, one of the many texts belonging to what was called the Matter of Britain, that is, the legends of the King Arthur and the Knights of the Round Table. In fact, it is not the only image of the Volto Santo to be found in the Arthurian legends: 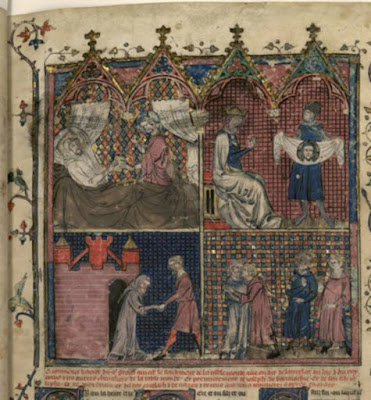 Because it has been a long time since I read some of the legends of the Grail quest, I did not remember this particular event. In fact, I have no read, nor do I own a copy of, the History of the Holy Grail (though soon I shall).

Looking through my books of Arthuriana this morning, I found this mention of the Volto Santo in Richard Barber's The Holy Grail: Imagination and Belief:


Robert de Boron derives most of his material on Joseph of Arimathea [who is said to have brought the Grail to England] from the Gospel of Nicodemus, but he then continues to use the same text or group of texts. He tells the story of the emperor Titus' son, Vespasian, who is cured by the sight of an image of Christ belonging to a poor woman named Verrine, or Veronica, which Pilate sends to Rome. This derives from a work often found as a continuation of the Gospel of Nicodemus, the Healing of Tiberius. Veronica had encountered Christ on his way to the Crucifixion, and had lent a cloth for Christ to wipe his face; when she took it home, she found a miraculous image of Christ on the cloth. The story has little to do with Joseph of Arimathea and the history of the Grail, though it motivates Vespasian's attack on the Jews as a result of which Joseph and his followers leave Jerusalem. Its importance lies in the fact that this is the history of yet another relic of the Crucifixion. In effect, two-thirds of The Romance of the History of the Grail is taken up by legends surrounding two of the great relics of the Crucifixion (118).

I went to bed last night laughing at the ways of the Lord. It seems he has found a way to unite a few of my principle interests together. I studied medieval history in college, and still prefer medieval history to all other histories. I have loved the legends of King Arthur and his Knights of the Round Table since I was a young boy. And the Volto Santo has captured my heart and is never far from my thoughts. This morning, I find myself simply marveling at the ways of the Lord.

Now it seems I will be rather distracted for quite some time, at least until several new books arrive.
Posted by Rev. Daren J. Zehnle, J.C.L., K.C.H.S. at 7:19 AM