Pope: Violence and war occur when man stops contemplating beauty and goodness and withdraws into himself

Taking up the call of the Holy Father Pope Francis to pray for peace in Syria, the Middle East, and throughout the world, I made my way last evening to St. Peter's Square for the Vigil of Prayer for Peace. 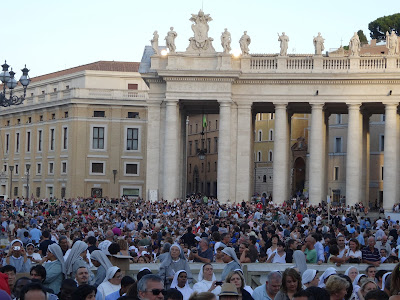 The piazza was filling up when I arrived about 5:30 p.m. and continued to fill up throughout the evening.  I was particularly struck throughout the evening by the great number of people of stayed through the entirety of the vigil.  There were many, to be sure, who came, stayed for a short (for example, to pray the rosary), and then left, but their spaces were quickly taken by late comers.

Prior to the beginning of the vigil at 7:00 p.m., the words of the Holy Father were read as a reminder to everyone of our purpose for being gathered together in such great numbers.


After His Holiness arrived, he greeted us and thanked us being present with him to pray for peace, after which he made the Sign of the Cross and the Veni, Creator Spiritus was intoned.

When Pope Francis appeared, I was surprised not to hear chants of "Fra-anceso," as had been common with Pope Emeritus Benedict XVI and with Blessed Pope John Paul II.  Whether this was at the request of His Holiness, I do not know; it did, however, seem clear that he does not like applause breaking out when he speaks (for which I do not blame him; it can be difficult to recover the moment).

Accompanied by the singing of the Ave, Maria, the Swiss Guard next processed in with the beloved icon of Mary, Salus populi Romani (Health of the Roman People), said to have been written by the Evangelist Saint Luke and which is usually housed in the Papal Basilica of Santa Maria Maggiore, was enshrined near the altar and venerated by the Holy Father. 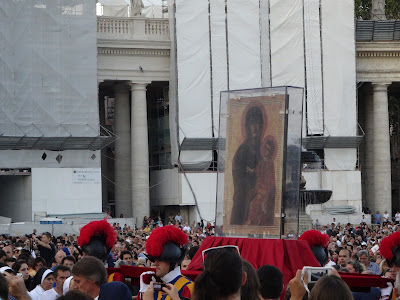 The icon itself is much larger than it appears when it is in the basilica.

The Joyful Mysteries of the Rosary were prayed and followed by the singing of the Litany of Loreto, after which Pope Francis preached to those assembled (with my emphases):

“And God saw that it was good". The biblical account of the beginning of the history of the world and of humanity speaks to us of a God who looks at creation, in a sense contemplating it, and declares: 'it is good'. This, dear brothers and sisters, allows us to enter into God’s heart and, precisely from within him, to receive his message. We can ask ourselves: what does this message mean? What does it say to me, to you, to all of us? 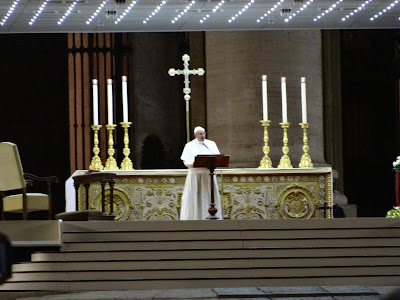 It says to us simply that this, our world, in the heart and mind of God, is the "house of harmony and peace", and that it is the space in which everyone is able to find their proper place and feel "at home", because it is "good". All of creation forms a harmonious and good unity, but above all humanity, made in the image and likeness of God, is one family, in which relationships are marked by a true fraternity not only in words: the other person is a brother or sister to love, and our relationship with God, who is love, fidelity and goodness, mirrors every human relationship and brings harmony to the whole of creation. God’s world is a world where everyone feels responsible for the other, for the good of the other. This evening, in reflection, fasting and prayer, each of us deep down should ask ourselves: Is this really the world that I desire? Is this really the world that we all carry in our hearts? Is the world that we want really a world of harmony and peace, in ourselves, in our relations with others, in families, in cities, in and between nations? And does not true freedom mean choosing ways in this world that lead to the good of all and are guided by love?
But then we wonder: Is this the world in which we are living? Creation retains its beauty which fills us with awe and it remains a good work. But there is also "violence, division, disagreement, war". This occurs when man, the summit of creation, stops contemplating beauty and goodness, and withdraws into his own selfishness.
When man thinks only of himself, of his own interests and places himself in the centre, when he permits himself to be captivated by the idols of dominion and power, when he puts himself in God’s place, then all relationships are broken and everything is ruined; then the door opens to violence, indifference, and conflict. This is precisely what the passage in the Book of Genesis seeks to teach us in the story of the Fall: man enters into conflict with himself, he realizes that he is naked and he hides himself because he is afraid, he is afraid of God’s glance; he accuses the woman, she who is flesh of his flesh; he breaks harmony with creation, he begins to raise his hand against his brother to kill him. Can we say that from harmony he passes to "disharmony"? Can we say this: that from harmony he passes to "disharmony"? No, there is no such thing as "disharmony"; there is either harmony or we fall into chaos, where there is violence, argument, conflict, fear.
It is exactly in this chaos that God asks man’s conscience: “Where is Abel your brother?” and Cain responds: "I do not know; am I my brother’s keeper?". We too are asked this question, it would be good for us to ask ourselves as well: Am I really my brother’s keeper? Yes, you are your brother’s keeper! To be human means to care for one another! But when harmony is broken, a metamorphosis occurs: the brother who is to be cared for and loved becomes an adversary to fight, to kill. What violence occurs at that moment, how many conflicts, how many wars have marked our history! We need only look at the suffering of so many brothers and sisters. This is not a question of coincidence, but the truth: we bring about the rebirth of Cain in every act of violence and in every war. All of us! And even today we continue this history of conflict between brothers, even today we raise our hands against our brother. Even today, we let ourselves be guided by idols, by selfishness, by our own interests, and this attitude persists. We have perfected our weapons, our conscience has fallen asleep, and we have sharpened our ideas to justify ourselves. As if it were normal, we continue to sow destruction, pain, death! Violence and war lead only to death, they speak of death! Violence and war are the language of death!
After the chaos of the Flood, when it stopped raining, a rainbow appeared and the dove returned with an olive branch. I think also of the olive tree which representatives of various religions planted in Plaza de Mayo, in Buenos Aires, in 2000, asking that there be no more chaos, asking that there be no more war, asking for peace. 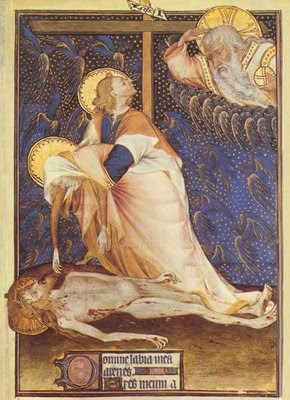 And at this point I ask myself: Is it possible to walk the path of peace? Can we get out of this spiral of sorrow and death? Can we learn once again to walk and live in the ways of peace? Invoking the help of God, under the maternal gaze of the Salus Populi Romani, Queen of Peace, I say: Yes, it is possible for everyone! From every corner of the world tonight, I would like to hear us cry out: Yes, it is possible for everyone! Or even better, I would like for each one of us, from the least to the greatest, including those called to govern nations, to respond: Yes, we want it! My Christian faith urges me to look to the Cross. How I wish that all men and women of good will would look to the Cross if only for a moment! There, we can see God’s reply: violence is not answered with violence, death is not answered with the language of death. In the silence of the Cross, the uproar of weapons ceases and the language of reconciliation, forgiveness, dialogue, and peace is spoken. This evening, I ask the Lord that we Christians, and our brothers and sisters of other religions, and every man and woman of good will, cry out forcefully: violence and war are never the way to peace! Let everyone be moved to look into the depths of his or her conscience and listen to that word which says: Leave behind the self-interest that hardens your heart, overcome the indifference that makes your heart insensitive towards others, conquer your deadly reasoning, and open yourself to dialogue and reconciliation. Look upon your brother’s sorrow – I think of the children, look upon these - look upon your brother's sorrow, and do not add to it, stay your hand, rebuild the harmony that has been shattered; and all this not by conflict but by encounter! May the noise of weapons cease! War always marks the failure of peace, it is always a defeat for humanity. Let the words of Pope Paul VI resound again: "No more one against the other, no more, never! ... war never again, never again war!". "Peace expresses itself only in peace, a peace which is not separate from the demands of justice but which is fostered by personal sacrifice, clemency, mercy and love". Forgiveness, dialogue, reconciliation – these are the words of peace, in beloved Syria, in the Middle East, in all the world! Let us pray for reconciliation and peace, let us work for reconciliation and peace, and let us all become, in every place, men and women of reconciliation and peace! Amen.

Following the Holy Father's words, a brief time of silent prayer was observed before the Blessed Sacrament was exposed on the altar for a period of Eucharistic Adoration, interspersed with readings from the Scriptures, hymns, and intercessions. 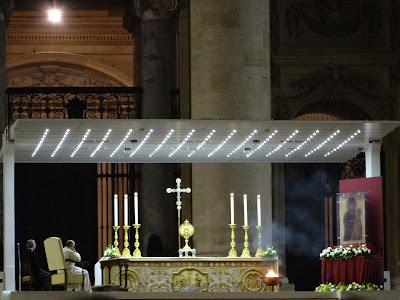 After the Office of Readings, the faithful received the Benediction of the Blessed Sacrament and the vigil concluded with the Divine Praises right about 11:00 p.m. when the Holy Father thanked us again for our presence and bid us a good night. 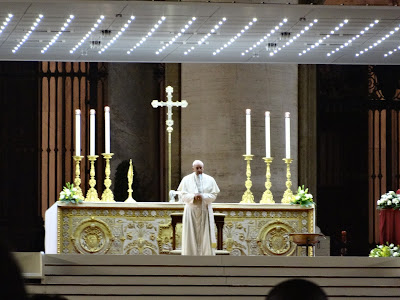