On being small, and on being a priest in Rome

As part of the ongoing Year of Faith, the Pope Emeritus, His Holiness Benedict XVI, invited the Knights and Ladies of the Equestrian Order of the Holy Sepulchre of Jerusalem to make a pilgrimage to the Eternal City 13-16 September 2013 for a series of meditations and prayers and a luncheon with the Holy Father.

So far as I know, His Holiness Pope Francis will honor this invitation, though it does seem part of the original schedule has changed.

As a Knight of the Holy Sepulchre, I wanted to take up the Holy Father's invitation, together with the 3,000 or so Knights and Ladies who are coming (10% of the entire Order), some of whom are coming from the Diocese of Springfield in Illinois, but was not sure if the schedule of my Italian classes would allow me to do so.  Now I know it will, so I am in the process of determining how I can take part in the planned activities.

Having left my mozzetta (a shoulder cape worn over a cassock and surplice) behind in the U.S.A. because it was rather large on me, I intended to get a new mozzetta from the good folks at Barbiconi, which I visited for this purpose this morning. 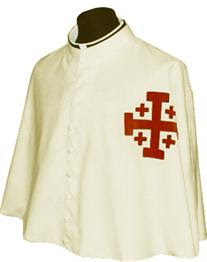 After getting the proper measurements, the gentlemen mentioned that it would be a "piccolo" mozzetta, that is, a small one, because of the size of my neck, with which I could not disagree.

I told him I would need it by 12 September and he said it would probably be ready by 10 September, but, if not, not until the following week.  He politely asked if this would cause a problem and when I said it would not he mentioned it was a good thing because, if it weren't ready by the 10th, nothing could be done about it anyway.

Afterwards, for whatever reason, and again commenting about it being piccolo, he went back to one of the workrooms and a few minutes later returned with a mozzetta which he had me try on.  It fit perfectly.  "Che buon fortuna," he exclaimed, and began to bag it up for me.  I was both surprised and very pleased; sometimes being small has its advantages.

As I made my way back to the Casa Santa Maria, an older couple from Spain stopped me to ask where the Church of the Gesù was located; in that brief moment, all of the Spanish that I was knew was replaced with Italian and completely forgotten even how to say, "de nada."

At any rate, this brief encounter demonstrates one of the chief difficulties of priests in Rome who go about in the Roman collar: tourists automatically presume that you know where every church is.  I suppose I now have three years to learn.
Posted by Rev. Daren J. Zehnle, J.C.L., K.C.H.S. at 5:46 AM