Being something of a bibliophile – more than 1,400 books are waiting awaiting my return in Springfield – I’m always on the lookout for new books and find bookstores something of a danger.  I joked with some friends back home before leaving for Rome that I might have to keep a tally of the books I acquire in these next three years.  After almost two weeks in Italy, that tally is now at just four books, one of which is the text for my Italian classes.

Thursday my fellow students and I were shown some of the ancient and important books in the library of the Sacro Convento here in Assisi.  Since it is attached to the Basilica of St. Francis, a couple of the seminarians and I decided to visit the bookstore (I had been staying away from bookstores as a caution).

The three books that I bought are:


I had a bit of free time yesterday afternoon and went to pray before the San Damiano Cross, which is presently housed in the Basilica of Saint Clare. 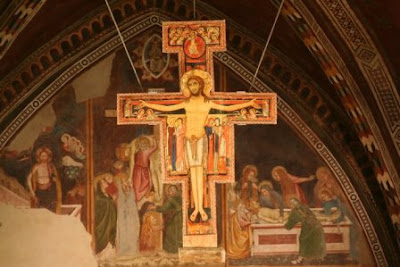 I took with me The Icon of the Christ of San Damiano and was struck by the following observation:

The border of the icon sets the tone immediately.  It is formed of a great number of shells.  Among the ancients, the seashell had become a symbol of the beauty and eternity of heaven because of its beauty and endurance.  So this border of seashells shows us that the icon is destined by its nature to reveal heavenly mystery.  However, the border is not fully complete.  It is not closed at the base but a space has been left to allow for an entry (14, emphasis mine).

If we look at the figures depicted in the icon – Mary, John, the centurion, etc. – we see that they “are all bathed in the light” that comes from the glory of the Risen Lord (24).  What is more,

…the characters are exactly the same size.  This detail means that the most important thing is not the personal holiness of each one, but that Christ is “all in all” (Colossians 3:11)… [I]t is helpful for us to discover that the characters resemble one another, all having the same large eyes, small mouths, and oval shaped faces.  If we look at Jesus we find the same characteristics.  The words of St. Paul suddenly come to our hearts: “They are the ones he chose specially, long ago, and intended them to become true images of his Son” (Romans 8:29) (24).

Whether Francis understand these various meanings when this crucifix spoke to him is difficult to say, but in the end his life makes clear that the meanings are true.  By sharing in the Passion of the Lord – both spiritually and bodily – Francis truly became another Christ and manifested the Lord’s love in an attractive and unmistakable way.  So it is that we rightly call him a Saint.

By meditating on the image of Crucified Love, by entering into the mystery of the Cross, we, too, like Saint Francis, can become other Christ’s and manifest his love in an attractive and unmistakable way.  This why Saint Clare urges us to look upon the Cross:

Place your mind before the mirror of eternity!  Place your soul in the brilliance of glory!  Place your heart in the figure of the divine substance!  And transform your whole being into the image of the Godhead Itself through contemplation (The Third Letter to Blessed Agnes of Prague, 12-13)!

By daily praying the crucifix of San Damiano, Saint Clare truly understood its meaning and encouraged others to live it with her.

Whenever we look upon an image of the Crucified Lord, we cannot help but notice the titulus above him that declares him to be truly the King.  “Before this inscription there is no escape; one must opt either for or against Jesus.  To remain neutral is not possible” (36).

Buying that little book was money well spent and lead to fruitful prayer.  If only the same could said of every book!
Posted by Rev. Daren J. Zehnle, J.C.L., K.C.H.S. at 1:29 PM