Most of you who read other blogs will already know that Thomas Peters, the American Papist, suffered a serious accident while swimming a few days ago that left him in a very serious condition with a broken neck.

Considering the gravity of Thomas' condition, his father, the canonist Ed Peters, who blogs at In the Light of the Law, has asked our prayers, particularly through the intercession of the Servant of God Father Felix Maria Capello, S.J.

My professor of canon law, Father John Dolciamore, spoke often of Father Capello and sought his intercession for his students at the beginning of each class.

I did not know a great deal about him when I stumbled upon his tomb when Bishop Paprocki and I were in Rome for his ad limina.  When I saw Dr. Peters' request to seek Father Capello's intercession for his son, I knew I had to return to the church of St. Ignatius where he is entombed.

Father Capello was a much beloved priest in Rome and was affectionately called "the Confessor of Rome" because of his skill in counseling penitents.  Through these past many decades, the Romans have retained his confessional and decorated it with gifts given through favors obtained through the holy priest's intercession: 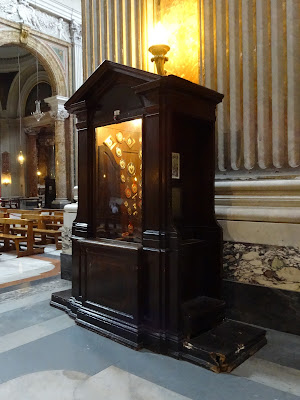 Father Capello's tomb is simple, but quite dignified: 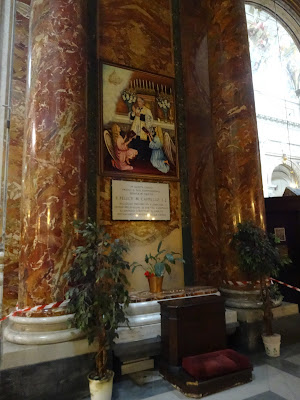 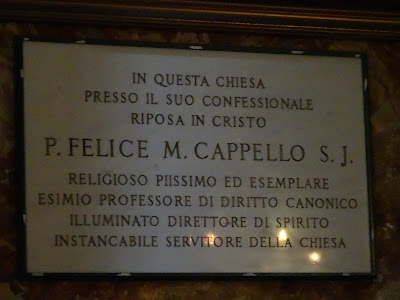 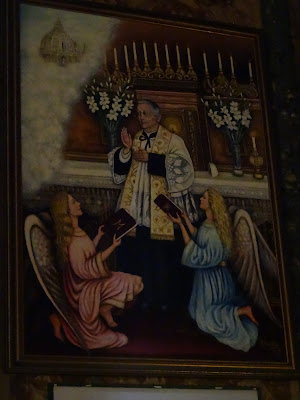 Before I left for the church, I attempted to find the prayer for his beatification and canonization, but could not do so.  Thanks be to God, holy cards were available in the church.  I knelt down at his grave and asked him intercede on Thomas' behalf, for his full restoration to health and strength and prayed the canonization prayer in Italian and the Our Father, Hail Mary, and Glory Be in English.

In Italian, the prayer is:

Dr. Peters, as I discovered a moment ago, provides a translation of the prayer:


O Jesus, for the welfare of the Church and the comfort of the faithful, you filled your servant Felice Maria Cappello with the gifts of your Spirit and made of him a pious and zealous priest, an exemplary religious, a luminary of learning, a reliable advisor, and an untiring worker, now grant the grace hoped for in evidence of his intercession and let us imitate his piety, humility, patience, and kindness before your Divine Heart and the Immaculate Heart of your Most Holy Mother

Our Father, Hail Mary, Glory Be.

In the years to come, I will call often upon Father Capello's intercession in my studies of canon law, which he loved so dearly.
Posted by Rev. Daren J. Zehnle, J.C.L., K.C.H.S. at 12:44 PM