I was for a time pastor of St. Patrick Parish in Girard and since we would observe today the memorial of Saint Patrick - that is, if today were not the Fifth Sunday of Lent - I thought I might share with you again the homily I preached in 2010 on the life of the Apostle to Ireland:


The Solemnity of Saint Patrick 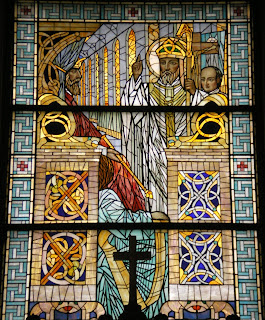 May the Lord give you peace!

On this day we celebrate what is for us the Solemnity of Saint Patrick, our heavenly patron, with much joy and gratitude to God for the bright light that the example of the Apostle to Ireland shines upon our path.

There are, of course, a great many people this day who think they celebrate Saint Patrick, the man who is credited with bringing Christianity to Ireland, with driving snakes from the isle, with using the shamrock to explain the mystery of the Trinity.  Beyond this, precious little is known by so many who seek to celebrate his feast.

People have put on their green, drunk their beer and will likely dine on corned beef and cabbage for dinner – as many here will do – but in doing so they celebrate a supposed Irish heritage more than Patrick himself.
Who is this man that has led to so much revelry, and why does Mother Church continue to honor him?
The Church celebrates the lives of the Saints because in them we see the light Christ refracted in a great array of colors showing us the many paths on which we may walk in our daily life in following in the footsteps of Christ Jesus.


We see above all in the life of Saint Patrick one who sought to “tell God’s glory among the nations; among all peoples, God’s marvelous deeds,” particularly among the Irish (Psalm 96:3).

In many respects, Saint Patrick remains shrouded in legend; even the dates of his birth and death are uncertain.  We do not even know when he was ordained a priest or even a bishop.  We do know that his father, Calpornius, was a deacon and his grandfather, Potitus, was a priest.  His father was also a government official, with an estate worked by slaves.  Even so, it seems Patrick was not raised in an especially religious family.

He tells us after he was captured by Irish pirates before his sixteenth birthday that at the time he “was indeed ignorant of the true God.”[1]

He was taken to Ireland as a slave and worked tending the sheep for six years.  In the solitude of the fields, longing for his family and fatherland, Patrick found himself praying many times each day.  “More and more the love of God and fear of him came to me,” he says, “and my faith was being increased, and the spirit was being moved.”[2]

Here is one lesson of the Christian life we can take from Saint Patrick: it is in solitude and in times of difficulty that, if we are open to the Lord and humble enough to receive him, his Spirit will stir in our hearts, thus causing us to pray without ceasing.  In fasting and prayer, Patrick encountered the Lord and rested secure in his love. Following his example, we, too, can encounter the Lord in moments of great adversity and dire need.

One night he heard in a dream a voice saying to him, “It is well that you are fasting, soon you will go to your own country.”  A short time later the same voice said to him, “Look, your ship is ready.”[3]

For one hundred and eighty-eight miles Patrick walked until finally he found a pagan ship anchored and ready to depart.  When first he was refused passage, Patrick prayed and one them shouted after him, “Come, because we are receiving you on faith, make friends with us in whatever way you wish.”[4]  Patrick boarded the vessels, hoping to introduce them to Christ.

For three days they sailed and landed in a deserted area.  After being captured again, Patrick walked for twenty-eight days and at last found himself among us kindred once more; the dream of his heart had been answered.  His people, who, he says, received him as a son, begged him never to leave them again.

In another dream a man by the name of Victoricius came to him bringing letters from the Ireland.  The man read one of the letters to Patrick, one from the “Voice of the Irish.”  Patrick heard the voice of the Irish cry out, “as if from one mouth, ‘We request you, holy boy, that you come and walk once more among us…  He who has laid down his own life for you he it is who is speaking in you.’”[5]

After a time Patrick accepted the call of the Irish, finding in it the will of God for his life which he “learned from Christ my Lord” (241).  He gave himself entirely for the people of Ireland so that they might know “the gift so great, so salutary, to know or to love God wholeheartedly, but at the loss of country and kindred” (247).  He would later describe himself as “a slave in Christ for that remote pagan people” and in this he found his joy and peace” (285).

He once said to those to whom he preached, “Would that you, too, would strive for greater things and perform more excellent deeds.  This will be my glory” (257).  These words he addresses to us as well, his spiritual children.

If we wish to celebrate the life of Saint Patrick and the legacy he has bequeathed to us, we cannot do so with drunken festivities marked with blatant sinfulness; we do so, rather, by striving for greater things, for growth in the virtues of faith, hope, and love.  We honor Saint Patrick by striving for holiness.  Let each of us, then, parishioners under his patronage, seek to be his glory!  Amen.