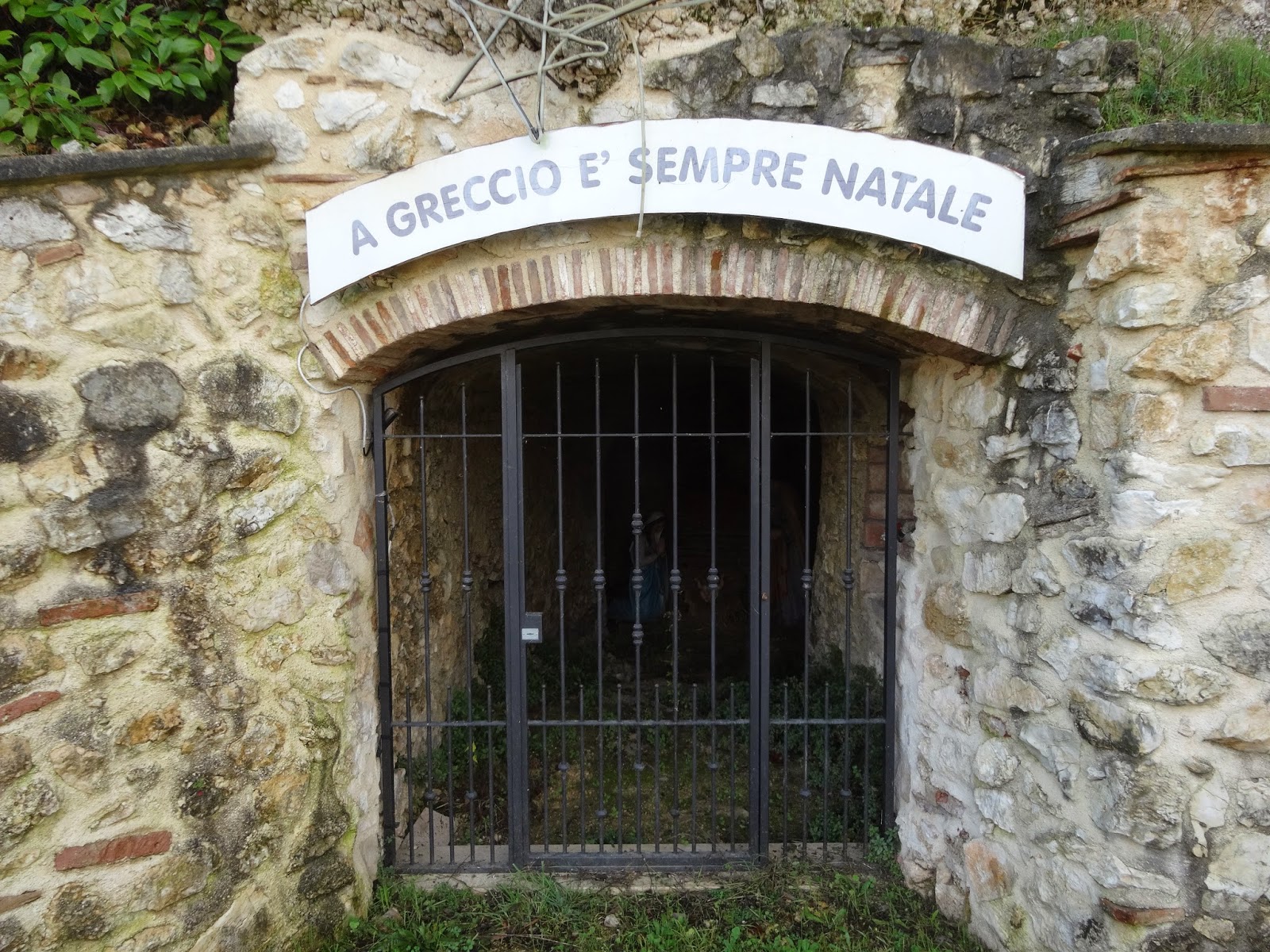 A sign outside what is known as the "Franciscan Bethlehem" declares, "At Greccio it is always Christmas." For almost 800 years pilgrims have been making their way to this mountain town about halfway between Assisi and Rome where on Christmas Eve in the year 1223 Saint Francis began the now beloved custom of erecting Nativity displays. I was one of those pilgrims in May of 1998 and this past Saturday I returned to Greccio again as a pilgrim.

Now, every pilgrimage has to have its share of difficulties and ours began (another priest from the Casa Santa Maria came with me) at the train stop at the base of the mountain on which Greccio has been built.

The first difficulty was a rather important one: We couldn't get the doors of the train to open and so had to ride the train to the next stop, which thankfully was only a few minutes away. Thirty minutes later, a train arrived to take us back to Greccio. This time the doors opened without difficulty.

As we exited the very small station, we beheld a lovely scene: 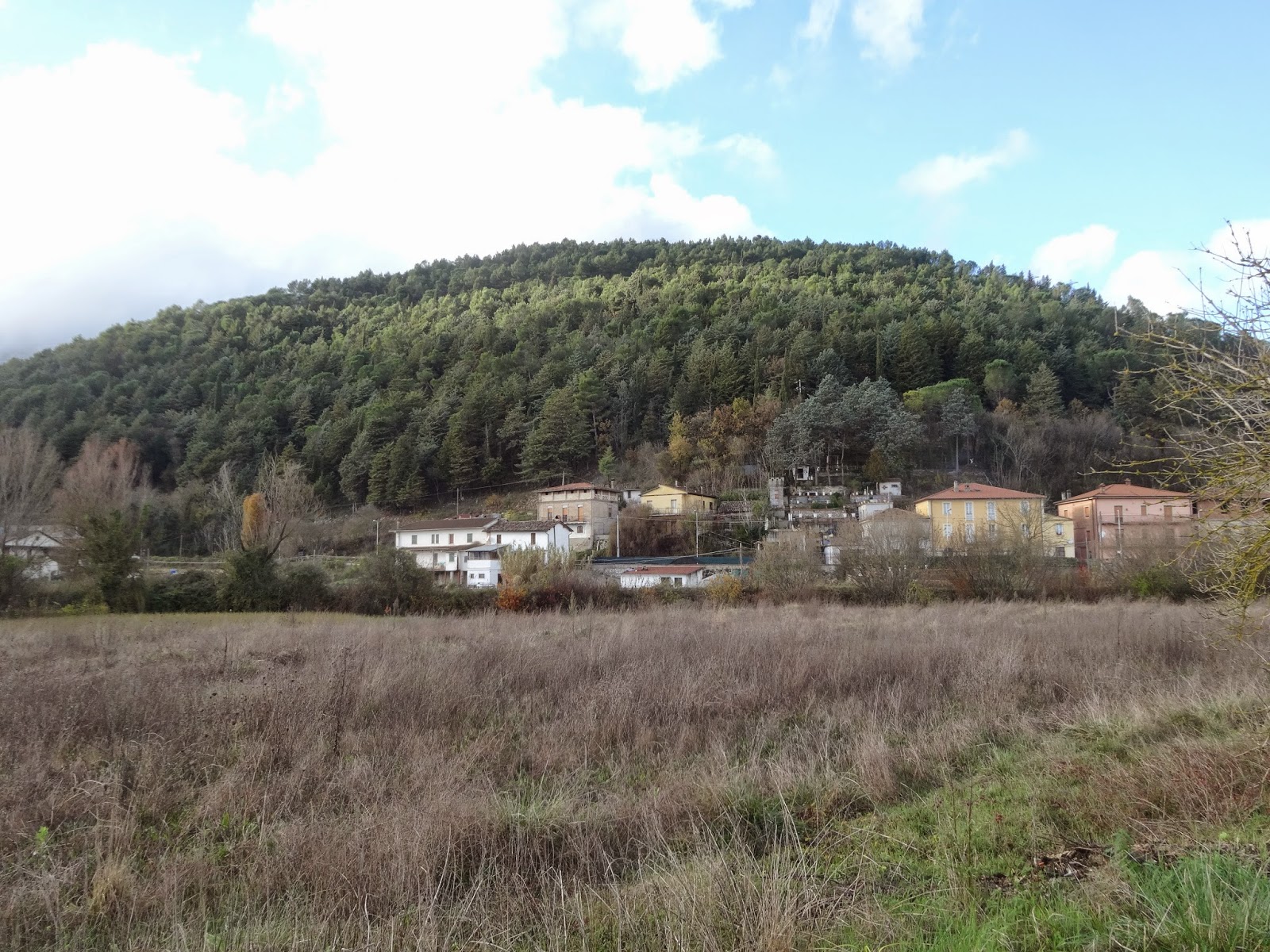 Having arrived, then, at the base of the mountain - Saint Francis really enjoyed forested mountains - we began the four kilometer (so we guessed, in hindsight; as is par for the course in Italy, each of the signs gave a different number) walk up to the sanctuary on a paved road, in drizzle and rain, and were treated to such sights as these: 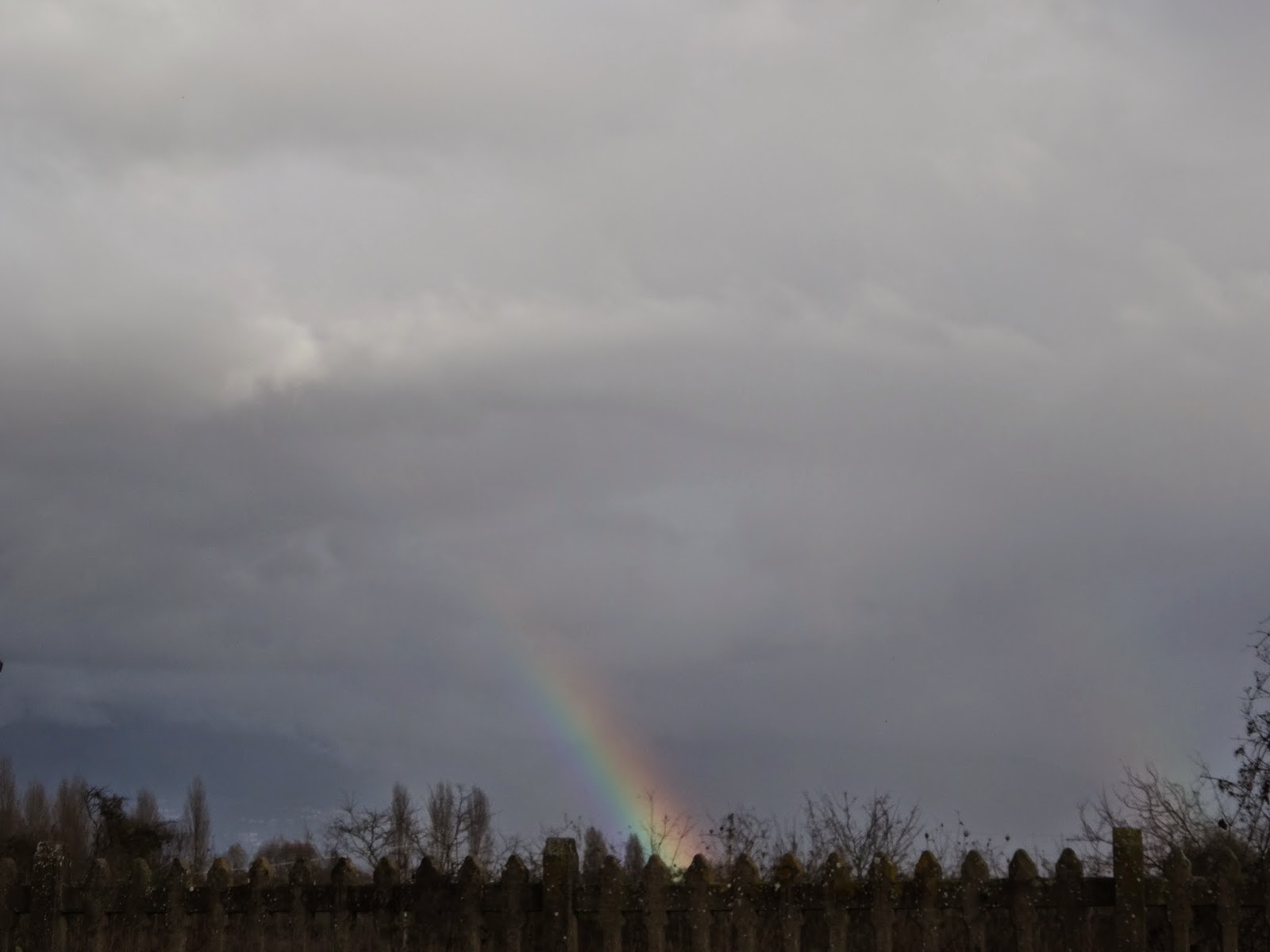 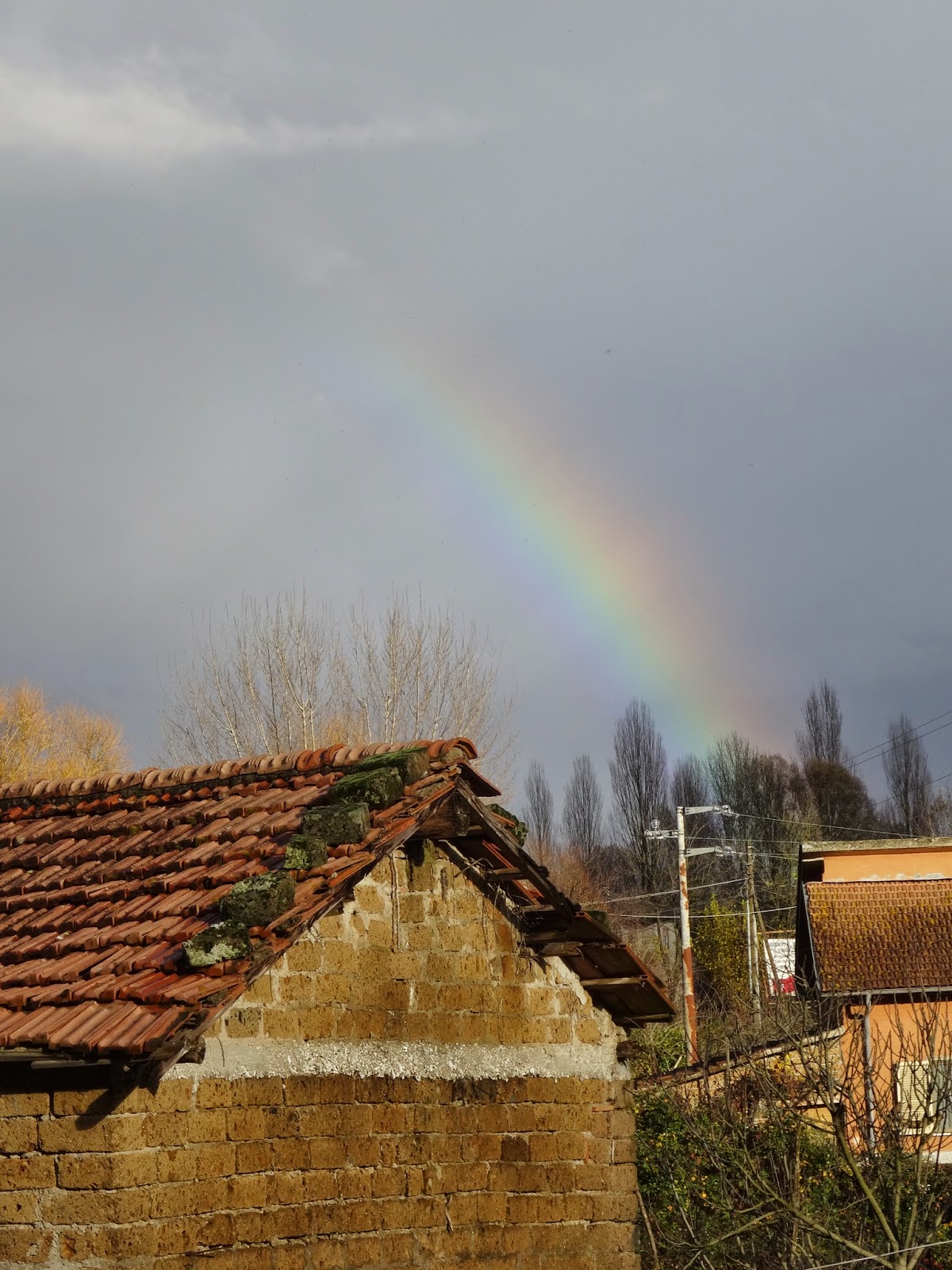 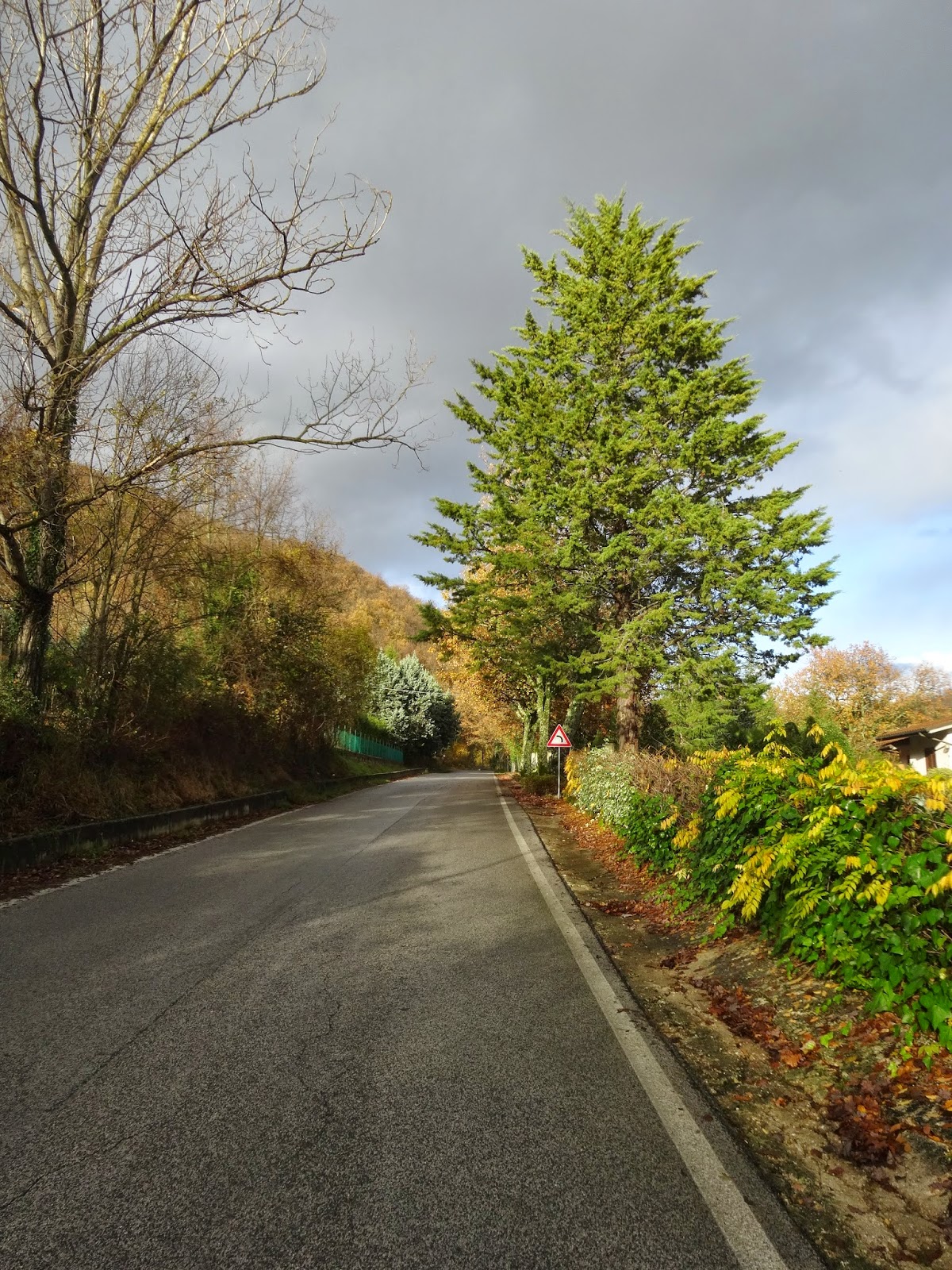 A lengthy walk it was, and very pleasant. On the way to Greccio from Rome, we saw several rainbows while we were on the train from Rome and we saw several more as we made our way up the mountain; the Hawaiians would call the rainbows a clear sign of God's blessing on our pilgrimage, which, now that it is all said and done, I cannot dispute.

The web sites I consulted before we left Rome indicated - or so I thought - that Greccio was a two kilometer walk from the train station. Before long, we realized this was not correct; either the web sites were wrong, or I read the information very incorrectly. Whichever the case, we knew we were getting close when finally we looked up and saw the sanctuary: 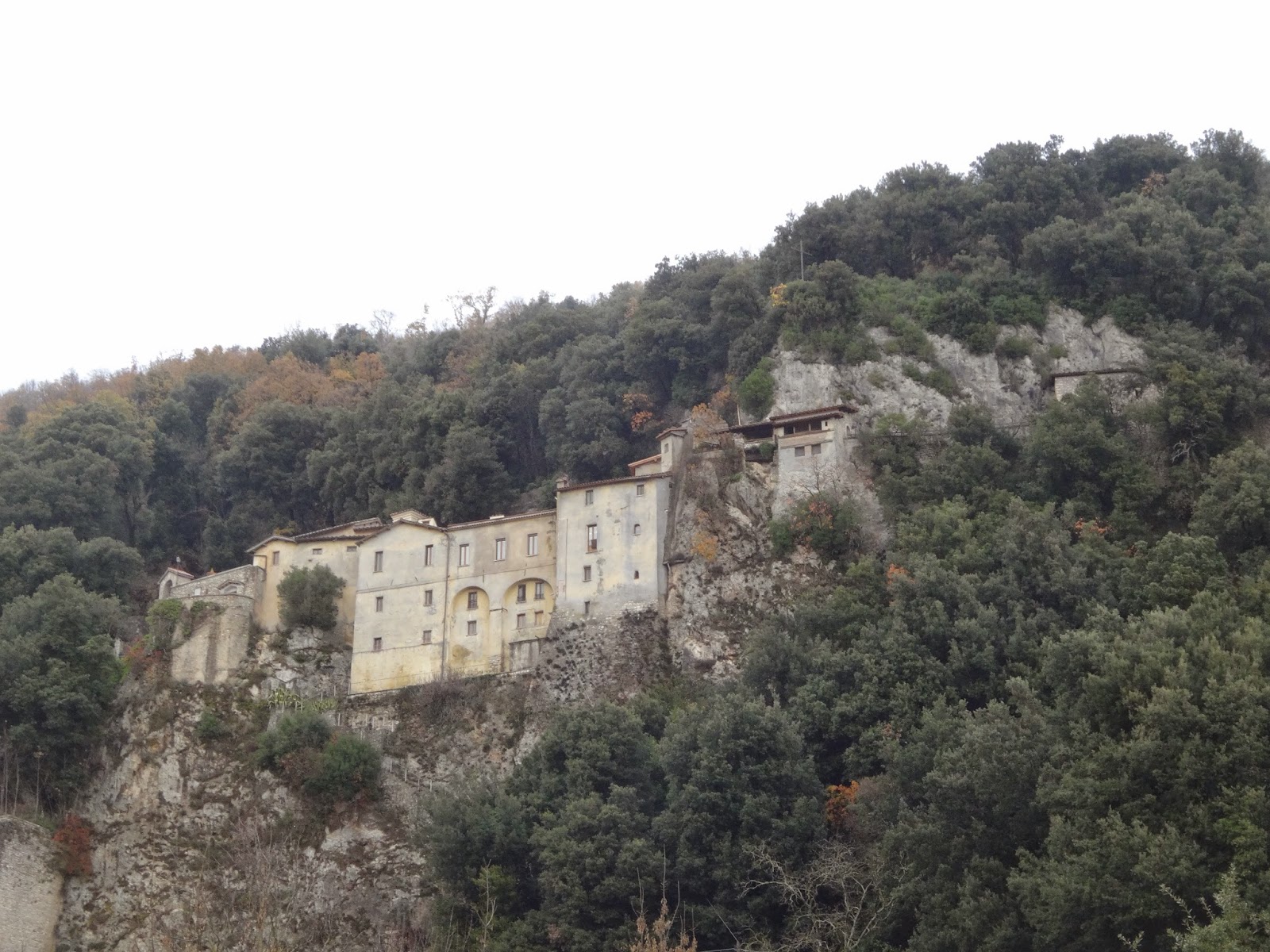 It was here that, 1223, that Christmas miracle took place. Thomas of Celano describes the marvels God wrought for the faithful on that  night, already marvelous in its own right as the commemoration of the Birth of the Savior, at some length:


About fifteen days before Christmas, blessed Francis had him [John, a nobleman of Greccio] summoned, as he often did, and said to him, "If you would like us to celebrate this feast day of the Lord in Greccio, then go there ahead of me and prepare what I tell you. I would like to portray the Child born in Bethlehem and to see somehow with my bodily eyes the hardship he underwent because he lacked all a newborn's needs, the way he was placed in a manger and how he lay on the hay between the ox and the ass." Upon hearing this, that good and pious man hastened off and had everything that the Saint had told him prepared in the designated place (The First Life, 84).

This took place one year before Saint Francis received the stigmata and three years before he died.

Notice, first of all, why the holy man of God wanted to re-create that night: "to see somehow with my bodily eyes the hardship he underwent."  The Poverello ordered the circumstances to be prepared so that he, and those with whom, might come to know and understand the Lord Jesus more clearly and fully. We, on the other hand, too often use our Nativity sets as cute decorations, as the Crescat has been demonstrating for years. This year, as your prepare your creche, it might be good to ask if helps to see the hardships Jesus underwent for us. 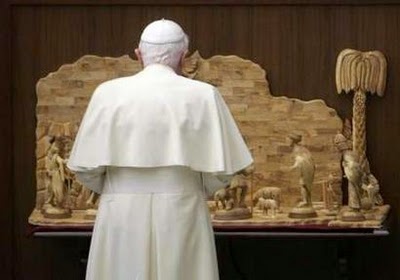 It might also be helpful to spend some time reflecting individually and as a family on these words of His Holiness Benedict XVI when he described the creche as "a school of life, where we can learn the secret of true joy":


This does not consist in having a lot of things, but in feeling loved by the Lord, in making oneself a gift for others, in loving. We look at the creche: The Madonna and St. Joseph do not seem to be a very fortunate family; they had their first child in the midst of great hardships; and yet they are full of deep joy, because they love each other, they help each other and above all they are certain that God is at work in their history, God who made himself present in the little Jesus.

Let us return now to the account of Thomas of Celano of that night in 1223:


...At length, the Saint of God arrived, saw that everything was ready and was delighted by it. The manger was prepared, the hay was brought and the ox and ass were led in. There, simplicity was honored, poverty exalted, humility praised, and Greccio was virtually transformed into a new Bethlehem. ... Sighing, the Saint of God stood before the creche, filled with sighs, contrite in piety and overcome with ineffable joy.

The solemn rite of the Mass was celebrated over the creche and the priest felt unusual solace. 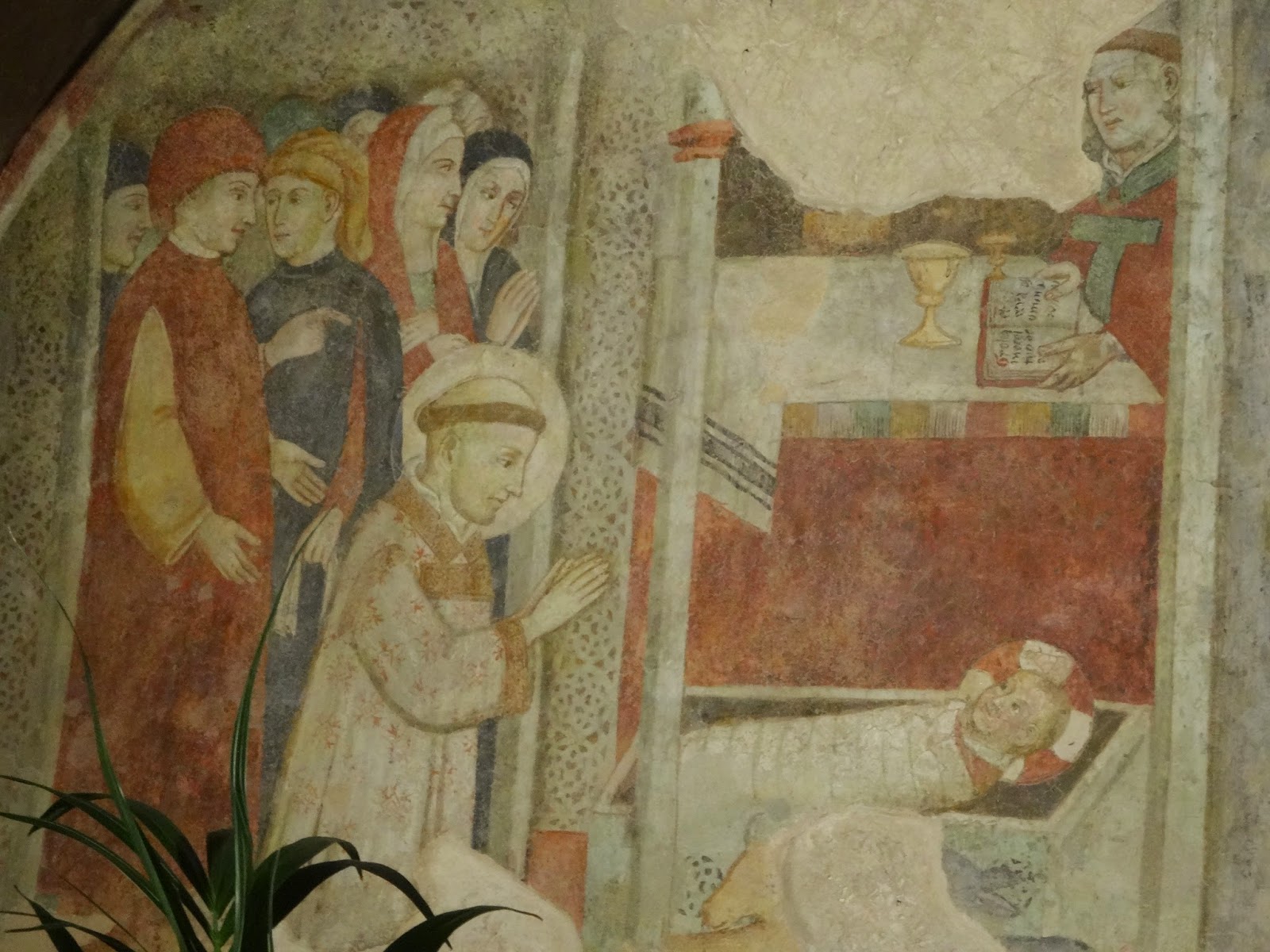 The Saint of God was dressed as a Levite, for he was a deacon, and he sang the holy Gospel in a resonant voice... Then he preached to the people and said the sweetest things about the birth of the poor King and about the little city of Bethlehem...

The gifts of the Almighty were multiplied there and a very virtuous man had a marvelous vision. He saw that a lifeless child was lying in the creche and that the Saint went alongside him and roused him from a sort of deep sleep. Indeed, this vision was no contrary to reality, for through His grace, His holy servant Francis brought Baby Jesus back to life in the hearts of many where He had been forgotten and his memory became etched deeply in their minds (First Life, 85-86).

In how many hearts today as the Baby Jesus been forgotten? In how many minds has the etching of his memory word away? We would do well in these days before Christmas to call upon the intercession of Saint Francis, so that he may help our hearts and minds remember the Baby Jesus.

On a curious note, Saint Bonaventure tells us that before ordering the arrangements described above, Saint Francis "asked and obtained the permission of the pope for the ceremony, so that he could not be accused of being an innovator" (Major Legend, X.7). This aspect of the life of Saint Francis is too frequently overlooked.

The present chapel built over the place prepared by John of Greccio, in Celano's words, "so that in the place where the animals once ate hay, for the health of their soul and body, men can now eat of the flesh of the immaculate and unblemished Lamb, our Lord Jesus Christ," remains a simple testament to both the joy and hardship of that first Christmas night (First Life, 87): 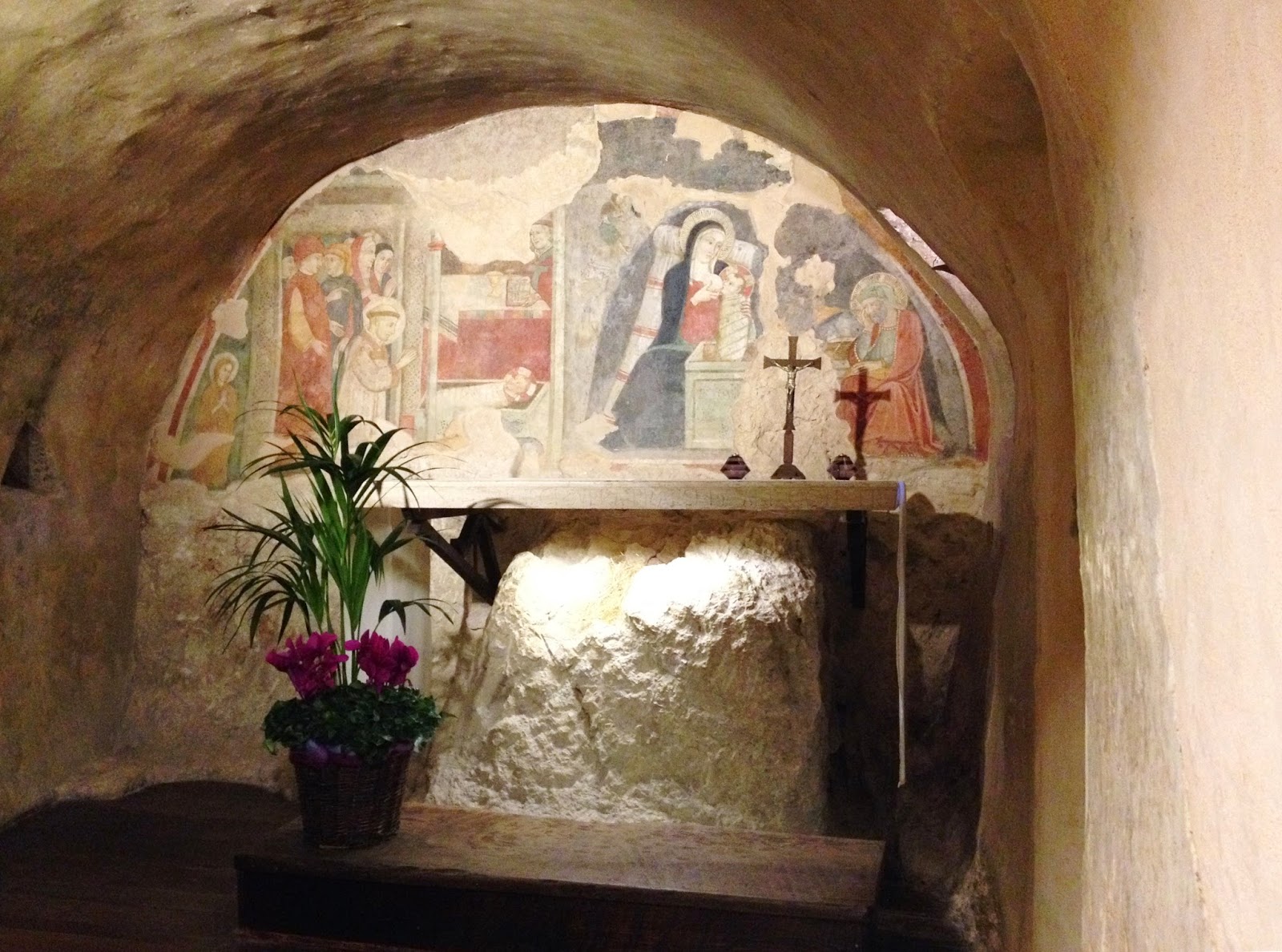 As you can see, the manger prepared was actually a rock, with a slight cleft in it. It was in this cleft that the Child of Bethlehem appeared. Today, hay is kept in the cleft: 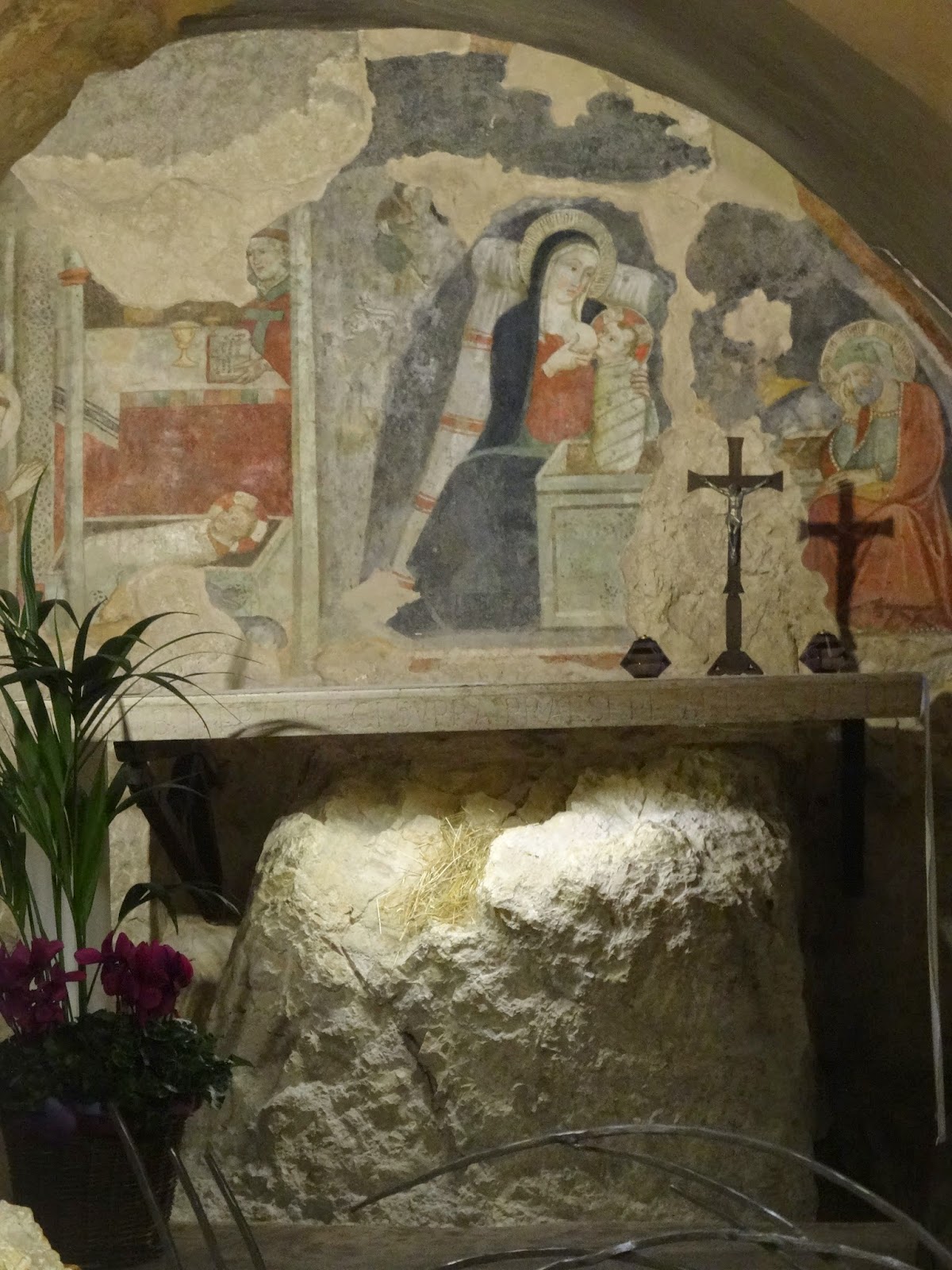 In his Letter to All the Faithful, Saint Francis urges us all to be more than brothers and sisters of the Lord Jesus:


We are mothers when we carry Him in our heart and body through love and a pure and sincere conscience; we give birth to Him through His holy manner of working, which should shine before others as an example.

What better gift could we hope to present to the newborn King?

I've posted a number of other pictures to Facebook, including the cells of Saint Francis and of Saint Bonaventure, that you may like to see.

If you've ever wondered why the ox and ass are present in our Nativity sets and why Saint Francis insisted on them, though they aren't mentioned in the Gospels, you might enjoy this homily I preached a few years ago.
Posted by Rev. Daren J. Zehnle, J.C.L., K.C.H.S. at 6:46 AM