Assisi celebrates today the Solemnity of San Rufino, the first Bishop of the city,  who converted the ancient Roman city to the faith of Jesus Christ in the 3rd century.


Because his preaching met with such great success, he seems to have been martyred in, or about, the year 238 at Costano.  According to tradition, a great stone was tied about his neck and he was tossed in the river Chiascio. 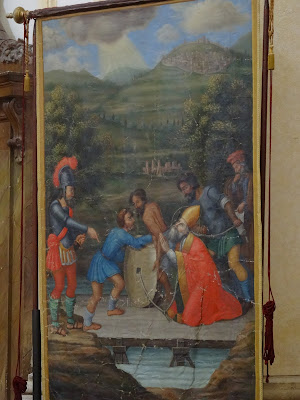 More than this cannot be said with any certainty.

It is striking being in this City of Peace so renowned for the lives of her two most famous citizens, Francis and Clare, celebrating the life and witness of a saint who is so often overlooked, those his body is also enshrined in the city.  One might dare to say - with no little trepidation - that his life should at least be celebrated as much as much as those of Francis and Clare, and perhaps even more so because he gave his life for the sake of the Gospel.

The celebration of his feast day began last evening with a prayer service in the Cathedral of San Rufino, which was followed by a procession through the city with a bust of the city's patron that contained a first class relic: 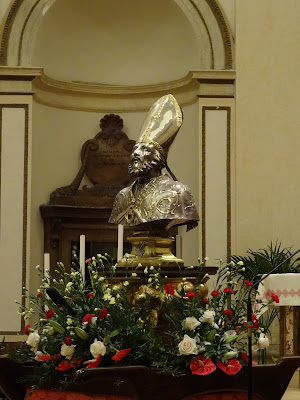 The procession first made its way to the Church of Saint Clare, where it stopped for a brief few moments of prayer before continuing its to the Piazza del Comune at the center of town.

There, the Most Reverend Domenico Sorrentino, Archbishop of Assisi, encouraged and exhorted the pilgrims and blessed the city. 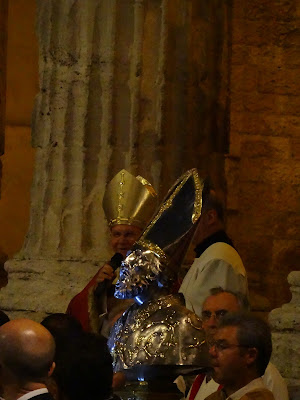 The procession then made its way back to the Cathedral where Archbishop Sorrentino again blessed the pilgrims, after which a band played outside in the piazza as the pilgrims enjoyed pastries. 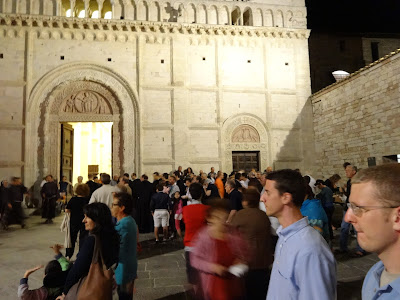 The festivities will conclude this evening with a concert of sacred music in honor of Saint Rufino.