When Pope Benedict XVI visited the tomb of his predecessor Pope Saint Celestine V on 29 April 2009, he left behind a gift: His pallium, the woolen symbol of the office of a metropolitan archbishop: 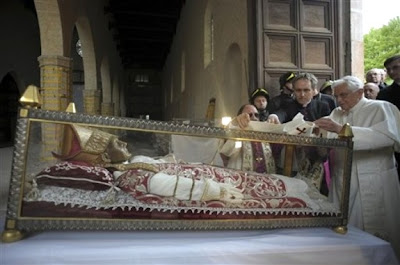 Five months and a few days after his election to the See of Peter, Pope Saint Celestine V resigned his office on 13 December 1294 after a few tumultuous months.  Some were grateful for the his resignation and others despised him for it.  Nevertheless, he is a Saint and his entry in the Roman Martyrology on May 19 reads:


At Castrum Fumorense near Alatri in Lazio, the birth of Saint Peter Celestine, who, when leading the life of a hermit in Abruzzo, being famous for his sanctity and miracles, was elected Roman Pontiff as an octogenarian, assumed the name Celestine V, but abandoned his office that same year and preferred to return to solitude.

The circumstances of Pope Celestine's resignation are quite different from those of Pope Benedict's resignation.  Celestine proved to be an man incapable of governing well; Benedict has proven to be the opposite.  Both Pontiffs, however, have shown themselves to be saintly; Celestine has already been canonized and I hope one day for Benedict to also be canonized.

At the time of Pope Benedict XVI's touching gesture in Aquila, some read into it an indication that the present Holy Father also had intentions of one day resigning his office.  It was certainly a curious gesture, since the Pope did not leave a pallium at the other tombs of his predecessors when he visited them, but I thought little of it; it seems I, and many others, was quite mistaken.

I will be grateful for Benedict's prayers for the Church following his resignation and I hope he will continue to write; there is still much he can teach us.

Let us continue to pray for His Holiness, that his time of retirement may be tranquil and serene; the Lord's beast of burden has surely earned his rest.
Posted by Rev. Daren J. Zehnle, J.C.L., K.C.H.S. at 12:43 PM