Homily - The Solemnity of the Immaculate Conception - 8 December 2021

The Solemnity of the Immaculate Conception

Whenever Mother Church requires our attendance at the Holy Mass on a holy day of obligation, someone inevitably asks why. Why does the Church oblige to attend Mass on certain days that are not Sundays on pain of mortal sin?

Without intending to be too simplistic in answering such a question, the Church obliges us, using the authority of the keys entrusted to Saint Peter and his successors, because it is good for us and for our salvation. It is good for us because it is helpful to stop and reflect on certain key aspects of salvation history and their relation to us here and now. To this answer, I can well imagine an objection being raised: What does the Immaculate Conception have to do with us?

Consider this headline I read this morning on the front page of a national newspaper: “ONLY WE CAN FIX US.” The headline, of course, is blatantly false, even given one of the leads into the article: “I will stop letting our differences divide us and start letting them develop us.” While the attempt of the article to encourage mutual dialogue between opposing views is an admirable and necessary goal, the premise that “only we can fix us” could not be more wrong. 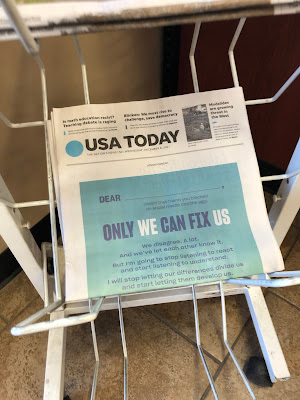 This notion lies at the heart of the entire Enlightenment project’s attempt to abandon and jettison and banish religion from public life. This notion still lies at the heart of the progressive movement today. The thinking is that if we just set up these policies and forbid those practices or ways of thinking the world will be just dandy and we will get along as bosom buddies. Anyone who pays attention to the world and to human nature, fallen as it is, knows that this is not true. These ideas fall flat because they refuse to take into account the reality of sin and its consequences in each of our hearts.

We hear the result of sin very clearly in the account of the Fall of Adam and Eve and how quickly they are to refuse to accept accountability for their actions: Adam blames Eve and Eve blames the serpent and the serpent earlier blamed God. It was a great game of passing the buck, which really hasn’t diminished after these many generations. But already then at the beginning of human history there is the great promise to undo this blame game: “I will put enmity between you and the woman, and between your offspring and hers; he will strike at your head, while you strike at his heel” (Genesis 3:15).

The woman, ultimately, is the Blessed Virgin Mary and the prophesied offspring is Christ Jesus through whom we are called to be “holy and without blemish” before God the Father (Ephesians 1:4). It is because of her offspring that Mary received the singular grace of being conceived immaculate, of being conceived without the stain of original sin. Because Mary would consent to the will of the Father conceive the Second Person of the Trinity within her womb through her marvelous response to the Archangel Gabriel, “May it be done to me,” she was conceived immaculately (Luke 1:38).

This is why, Pope Francis said, Mary was “greatly troubled” at the Archangel’s greeting to her. The Holy Father asked,

How is Mary’s heart? Having received the highest of compliments, she is troubled she [sic] because she hears addressed to her what she has not attributed to herself. In fact, Mary does not credit prerogatives to herself, she does not hold claim to anything, she accounts nothing to her own merit. She is not self-satisfied, she does not exalt herself. For in her humility, she knows she receives everything from God. Therefore, free from herself, she is completely directed toward God and others. Mary Immaculate does not look to herself. This is true humility; not looking to oneself, but looking toward God and others.[1]

Mother Church obliges us to attend the Holy Mass today to remind us that you and I cannot fix ourselves, no matter what the headlines say.

Mary did not sin, though she certainly knew its effects; even so, Mary was in need of a Savior, and it was because of him that she received that prevenient grace, that grace coming before the Death and Resurrection of her Son, that she was conceived without the stain of the original sin. Mary received the fruit of her Son’s sacrifice before anyone else and was truly holy and without blemish before him.

You and I, however, do sin, in ways both large and small; this cannot be denied. Though we have been cleansed of the original sin in the waters of Baptism, its effects still remain with us; we still have a tendency toward sin. But if we know follow the example of Mary, if we entrust ourselves completely to the will of God, we, with her, can be made holy and without blemish before God. But we cannot do this on our own; only God can do it in us.

Let us, then, not be afraid to break with society and freely acknowledge that we cannot fix ourselves; let us instead entrust ourselves entirely to the merciful love of God, who in Christ Jesus, who “chose us in him, before the foundation of the world, to be holy and without blemish before him” (Ephesians 1:4). “And when we are assailed by the doubt that we cannot succeed, the sadness of not being adequate, let us allow the Madonna to look on us with her ‘eyes of mercy’, for no one who asked for her help has ever been abandoned!”[2] Amen.