Today, dear brothers and sisters, we celebrate that day when God “lifted up the lowly” from the earth (Luke 1:52). While today we hear Saint Elizabeth acknowledge the great dignity of Mary when she addressed her as “the mother of my Lord,” Mary acknowledged her own lowliness in the presence of the Archangel Gabriel when she referred to herself as but “the handmaid of the Lord,” and today she calls herself the Lord’s “lowly servant” (Luke 1:38; 43; 48).

When he considered the high dignity of this lowly Virgin, Saint Anthony of Padua asked:

What grace so great, what mercy so great, was ever shown or could be shown to angel or to man, as that of the blessed Virgin, whom God the Father willed to be mother of his own Son, equal to him and begotten before all ages? It would be the greatest grace and honour for some poor little woman to have a son by the Emperor; truly, more excellent still was the grace of the blessed Mary, who bore a Son to God the Father; and therefore she has been found worthy of being crowned this day in heaven.[1]

Indeed, it was because of Mary’s singular fidelity to the divine plan that she has been granted two unique privileges, namely, her Immaculate Conception and her Assumption into heaven; the second was granted in virtue of the first.

But why should the Lord grant the favor of her Assumption to his Blessed Mother? He granted them to her, we might say, for two reasons: first, because it is eminently fitting and, second, because it gives us hope.

It is fitting that the Lord should receive his Mother into his presence because, as Blessed Pope Pius XII says:

It seems inconceivable to think of her, the one who conceived Christ, brought him forth, nursed him with her milk, held him in her arms, and clasped him to her breast, as being apart from him in body, even though not in soul, after this earthly life. Since our Redeemer is the Son of Mary, he could not do otherwise, as the perfect observer of God’s law, than to honor, not only his eternal Father, but also his most beloved Mother. And, since it was within his power to grant her this great honor, to preserver her from the corruption of the tomb, we must believe that he really acted in this way.[2]

How could the Son not glorify his Mother and, in this way, bring glory to himself?

But there is more, for if we look at the Assumption of our Blessed Mother, we see the promise of our own resurrection from the dead on the Last Day. We know that Mary remains fully human, even in her Assumption into heaven, and this gives us hope. For if Mary, a human, has entered body and soul into the heavenly realm, we who are also human can enter heaven with her and be in the presence of her Son; if her body can be in the presence of her Son, so, too, can ours. Mary’s Assumption into heaven shows us that there is a place in heaven for us, too, if only we imitate her lowliness and faithful love of God!

In her earthly life, Mary loved to look upon the beauty of the Face of her Son, just as he longed to look upon the beauty of her face, upon the face “full of all graces, pleasing to the eyes of the angels, and on which they desire to look, as it shines like the sun in its strength.”[3] Through the grace of her assumption, Mary now looks continually upon the Face of her Son and he looks continually upon her face; because she now looks upon his Face with her own eyes, we, too, will be able to look upon him face to face. 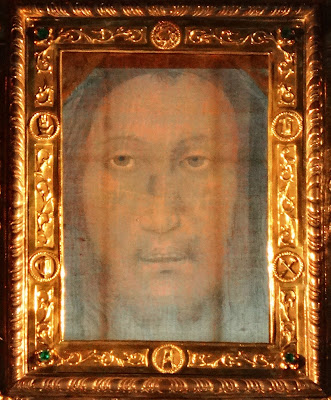 Email ThisBlogThis!Share to TwitterShare to FacebookShare to Pinterest
Labels: Assumption of the Blessed Virgin Mary, Homilies