You'd think speaking Italian in Rome would be helpful 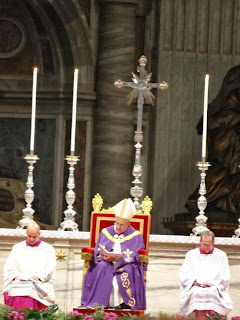 On Saturday evening His Holiness Pope Francis presided at Solemn Vespers I for the First Sunday of Advent in the Vatican basilica.  As I made my way to the basilica with two other priests from the Casa Santa Maria I realized - when we were already half-way there - that in my haste to remember my gloves I left my ticket on my desk.  Remembering where we were (Italy) and knowing that not having a ticket doesn't seem to preclude entrance to the Wednesday Audiences or much else these days, we kept going thinking we would simply sort it out if need be.

After making our way through the extraordinarily long line and passing through the security checkpoint without being asked to present a ticket we thought all was well, but as we passed by the Bronze Doors, however, a member of the security team, an Italian, asked for our tickets.

I said to him, "Ho dimenticato il mio biglietto" (which translates to, "I forgot my ticket") and showed him my student ID card from the Pontifical Gregorian University since the prayer service was billed as one for the students of the Roman universities (though that didn't seem to matter much as a great many people who were clearly not students came with tickets).

In response, he simply said, "Svizzera" (which translates to, "Swiss").  Not quite knowing what to expect next I began ascending the steps to the Bronze Doors with a sigh.  As I approached the guard he saluted (which doesn't happen very often now for simple priests) and I passed within the doors to speak with two of the Swiss Guard inside (did you know the coat of arms of the Pope during whose reign then entered the Guard is engraved on the hilt of their swords? I didn't either, but was pleased to see Benedict' XVIs one of the guard's swords).

I greeted them and said, "Ho dimenticato il mio biglietto" and showed them my ID.  One of them pronounced my last name - in proper German - and the other guard began looking through a list for my name, but could not find it.  The one looked at my ID again and gave my first name, the name of the Gregorian university, and my nationality, but still could not find my name.  After some flipping of pages he looked at me and asked in English, "For how many tickets did you make a reservation?"

"None," I said.  "I forgot my ticket in my room and the Gregorian did not have me give my name."

"Oh," he said and simply handed me a new ticket.

Sometimes I really think I'd get farther in Italy if I never tried to speak Italian and only spoke English instead.
Posted by Rev. Daren J. Zehnle, J.C.L., K.C.H.S. at 11:51 PM