BREAKING: Paprocki to offer prayers of supplication and exorcism in reparation for sin of same-sex "marriage"

Following the approval by the Illinois General Assembly of the so-called Religious Freedom and Marriage Fairness Act that attempts to redefine marriage in the Land of Lincoln, His Excellency the Most Reverend Thomas John Paprocki, Bishop of Springfield in Illinois, an extraordinary time of time.

He will gather with the faithful in the Cathedral of the Immaculate Conception on Wednesday, November 20th at 4:00 p.m. to offer "Prayers of Supplication and Exorcism in Reparation for the Sin of Same-Sex Marriage."

The Diocese of Springfield in Illinois has released the following statement: 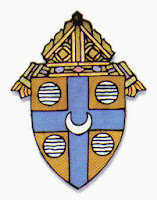 SPRINGFIELD — Scheduled for approximately the same time that Gov. Pat Quinn signs into Illinois law the redefinition of civil marriage, Bishop Thomas John Paprocki will offer “Prayers of Supplication and Exorcism in Reparation for the Sin of Same-Sex Marriage” at the Cathedral of the Immaculate Conception, Sixth and Lawrence streets in Springfield, on Wednesday, Nov. 20, from 4 to 5 p.m. Clergy, religious and laity are invited to attend.

“The context for this prayer service may be understood by recalling the words of Pope Francis when he faced a similar situation as Archbishop of Buenos Aires in 2010,” Bishop Paprocki said.

Regarding the proposed redefinition of civil marriage in Argentina, then-Cardinal Jorge Mario Bergoglio wrote on June 22, 2010: “The Argentine people must face, in the next few weeks, a situation whose result may gravely harm the family. It is the bill on matrimony of persons of the same sex. The identity of the family, and its survival, are in jeopardy here: father, mother, and children. The life of so many children who will be discriminated beforehand due to the lack of human maturity that God willed them to have with a father and a mother is in jeopardy. At stake is the total rejection of God’s law engraved in our hearts. ... Let us not be naive: it is not a simple political struggle; it is an intention [which is] destructive of the plan of God. It is not a mere legislative project (this is a mere instrument), but rather a ‘move’ of the father of lies who wishes to confuse and deceive the children of God.”

The prayers for “Supplication and Exorcism Which May Be Used in Particular Circumstances of the Church” are taken from the Appendices to the 2004 Latin edition of the Rite of Exorcism, the introduction to which explains, “The presence of the Devil and other demons appears and exists not only in the tempting or tormenting of persons, but also in the penetration of things and places in a certain manner by their activity, and in various forms of opposition to and persecution of the church. If the diocesan bishop, in particular situations, judges it appropriate to announce gatherings of the faithful for prayer, under the leadership and direction of a priest, elements for arranging a rite of supplication may be taken from [the texts provided in these appendices].”

“It is scandalous that so many Catholic politicians are responsible for enabling the passage of this legislation and even twisting the words of the pope to rationalize their actions despite the clear teaching of the church,” he said. “All politicians now have the moral obligation to work for the repeal of this sinful and objectionable legislation. We must pray for deliverance from this evil which has penetrated our state and our church.”

Bishop Paprocki concluded, “Pope Francis has also urged us to be mindful of God’s mercy, so it is good to recall the profound expression of divine mercy uttered by Jesus as he was dying on the cross to save us from our sins, ‘Father, forgive them, for they know not what they do’ (Luke 23:34).”

The Catholic Diocese of Springfield in Illinois is 130 parishes in 28 counties in central Illinois.

For my part, I will join my prayers from Rome at the time the Bishop and faithful pray.  I ask you to do the same, if you cannot join him in person; if you can join him for the prayers, please do so.
Posted by Rev. Daren J. Zehnle, J.C.L., K.C.H.S. at 11:35 AM