A March for Life re-cap

Aside from one incident in which the bus on which I was riding was clipped by a semi (thanks be to God, only the outside mirror was scuffed), it may have been the smoothest pilgrimage to the March for Life I have been on yet.  I really could not have asked for a better group of pilgrims.

We arrived in Washington, D.C. later than planned because the weather we drove through slowed our travel across the country.  With this in mind, we went straight to the Basilica of the National Shrine of the Immaculate Conception to join some 13,000 of the faithful for the Vigil Mass Thursday night.

Naturally, the Basilica filled quickly as the afternoon progressed.  When I made my to the Crypt Chapel where the seminarians, deacons, priests, and seminarians vest for Mass, I could tell there were more people in attendance than in previous years.  In years past, the time before the Mass is a good opportunity to visit with priests that I don't get to see throughout the year.  This year, though, there were so many people downstairs it made it difficult to find the priests I know.

After the Mass, the priests often sneak out a side door and walk down the front steps of the Basilica on our way to our buses.  In years past, it was easy to walk down the steps at the buses without fighting through our a crowd.  This year, though, there were several crowds to fight through.

The next morning I celebrated Mass for my group of pilgrims at St. Peter's on Capitol Hill (you can read my homily here).  The staff of the parish has been very welcoming and hospitable to us for many years now.  Several smaller groups of pilgrims from the Diocese also joined us for the Mass.

After the Mass we made our way to the national mall and waited for the March for Life to begin.  We somehow managed to take our places in the "line up" in such a way that we found ourselves toward the beginning of the March. 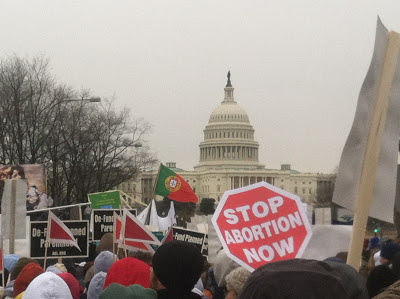 The closer we marched to the Supreme Court I became more aware of the reason for the heavy police presence: some forty pro-abortion demonstrators standing on the sidewalk in front of the Supreme Court.  Without a doubt, this is largest number of abortion supporters I have every seen at the March for Life and the first time I remember seeing them there.

What especially struck me about their presence was the striking difference between the two groups of people.  On the one hand were some 650,000 people marching peacefully in support of life, who were praying, singing, and laughing on their way.  On the other hand were some forty people yelling and screaming with great anger and hatred at those who disagreed with them.  We simply walked past them.

After the March we toured Ford's Theatre before having supper at Union Station.  The next day we visiting Arlington Cemetery, the Holocaust Museum, and the Smithsonian Institution before hopping back on the buses to make our way home.

For several years now the group I travel with has been wearing red and white striped scarves to help us keep an eye on the members of our group.  The scarves have led some to call us "the Waldos," a nickname we enjoy.  The scarves also serve as a useful way for other people we know to find us, though this year Sr. Karolyn, F.S.G.M. could not find us.  She sent the following note:


I looked for you at the March but amazingly did not run into ANYONE from Springfield.  I was even carrying a Dr. Pepper to give you.

I knew those Sisters of St. Francis of the Martyr St. George were fantastic!

But though Sr. Karolyn could not find us, Imagine Sisters found her and took a picture of her (on the right) and two of her Sisters singing "God Bless America":

Email ThisBlogThis!Share to TwitterShare to FacebookShare to Pinterest
Labels: Diocese of Springfield in Illinois, March for Life