My Brother the Redneck

One of the things I most enjoy about the Middle Ages is their sheer honesty often used when describing their leaders, an honesty that by today's standards of political correctness would, at the very least, border on the offensive (in a time without surnames you had to distinguish people somehow).

Some simply stated the obvious, as with King William the Bastard or Geoffrey the Bearded or Wilfred the Hairy or Fortun the One-Eyed or King Canute the Tall.

Some of the epithets attached to the names of their kings recognized their good qualities, as in the case of King Richard the Lion-hearted (couer de lion) or King Sancho the Wise.

Other epithets, however, were less flattering, as in the case of King Edward the Confessor - so-named because he frequently made use of the sacrament of confession, which is, in part, why is also a Saint - or King Louis the Pious, both titles that could be both a word of praise or a jab.  There is also King Henry the Fowler, who was fixing his nets when he received word he was to be king.  And I cannot forget my favorite epithet, that given to King Peter the Ceremonious.

Still other epithets were much less ambiguous and rather pointed.  Consider, for instance, Pepin the Short or King Charles the Bald or King Aethelred the Unready or Fulk the Quarreler.

By now you're probably wondering why I've brought any of this up.

After my day of Q&A at Quincy Notre Day High School I had supper with my brother, to whom I often refer as "my brother the redneck," an epithet he rather enjoys.

When we finished our meal he insisted I swing by his house to see the Christmas light display he has prepared in his yard this year (he had to put them up already, he explained, because a neighbor already had his lights up and on).

When my brother turned on his lights (to his credit he largely leaves them off until Thanksgiving night) I beheld this sight: 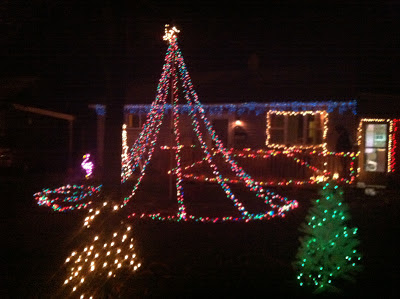 There is no need to rub your eyes, they do not deceive you; that is a pink flamingo on the left (wearing, I'm assured, a Santa hat).

He has the lights on some sort of a musical timer with the lights going on and off according to the music, so snapping a picture of all of the lights was a bit of a trick.

After watching the display for a short time (it was cold outside), I suggested he needed more wildlife or snowmen.  To my well-meaning suggesting, he replied with a happy smile, "I can get a pig!"