Homily on Guardian Angels and the Respect for Life

It may seem strange to say so, but the Gospel passage Mother Church provides for us today contains one of my favorite verses: “We are unprofitable servants; we have done what we were obliged to do” (Luke 17:10). Another translation of the Greek text puts it perhaps into easier English: “We are unworthy servants; we have only done what was our duty.”

This particular verse really should be one of the guiding principles of each of our lives. If we keep this verse ever in our hearts, it reminds us of an important truth: we are not the lords and ladies of our own lives. We are but mere creatures, whose existence is entirely dependent on the will of the Creator. As such, we must strive to serve him and to live in accord with his will for us.

When he considered this verse, Saint Ambrose – the spiritual father of Saint Augustine – said:

Know that you are a servant overwhelmed by very much obedience. You must not set yourself first, because you are called a son of God. Grace must be acknowledged, but nature not overlooked. Do not boast of yourself if you have served well, as you should have done.[1]

We are called neither to mediocrity nor to self-indulgence or self-promotion. Our society today gets this wrong and so produces very much unhappiness.

There are other creatures, however, who do find joy in being obedient to the will of God and who never boast of their service to the divine majesty. These are the angels. The angels know what we often forget, namely, that “obedience is pure when a command obliges simply because it was commanded, and for no other reason.”[2] Our obedience to God is often impure because, when we are obedient, it is often with grumbling, moaning, and complaining, and with hardened hearts (cf. Psalm 95:8-9).

If today were not Sunday, we would be observing the memorial of the Guardian Angels, whom J.R.R. Tolkien referred to as “God’s very attention itself, personalized.” He went so far as to say, “And I do not mean ‘personified,’ by a mere figure of speech according to the tendencies of human language, but a real (finite) person.”[3] 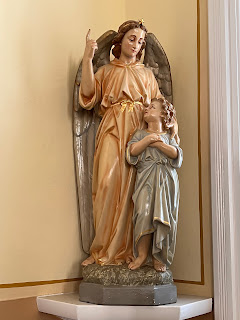 We often associate Guardian Angels with children, and rightly so. Consequently, in this Respect Life month, how can we not consider the more than 63 million babies aborted in these United States of American since the wrongly decided Supreme Court case Roe v. Wade? When the Supreme Court recently decided Dobbs v. Jackson, the Justices rightly overturned the previous court decision, returning to the question of the legality of abortion to each State of the Union. There was – rightly – much rejoicing among those of us in the pro-life movement, but our work here in Illinois has now only just begun.

According to the Illinois Department of Public Health, 46,243 babies were aborted in 2020, more than the population of my hometown; figures for 2021 are not yet available[4]. Since Illinois has some of the strongest laws favoring abortion in the nation, we can expect this lamentable figure to increase as neighboring states continue to either restrict or to ban abortion. What can we do to reduce these numbers? How can we increase our efforts to care for unborn babies and for their mothers, who all too often find themselves in horribly difficult circumstances with no one to support them and see no other option? We must not only continue to do what we have been doing, but also find new and creative to personally reach out to babies, mothers, and fathers because this is what the Lord Jesus has given us to do, to love our neighbors as ourselves (cf. Matthew 19:19).

We may be tempted to think that we cannot do very much to change the culture of death so prevalent in our state; such thoughts of discouragement do not come from God. We may not be able to effect a great change across the state, but we can certainly effect a great change in the life of an individual woman, child, or man. We cannot forget that while “it is not our part to master all the tides of the world but to do what is in us for the succor [help] of those years wherein we are set, uprooting the evil in the fields that we know, so that those who live after may have clean earth to till.”[5]

As I said a moment ago, we often think of Guardian Angels as something for children to be concerned about and not adults, but this is not the case. Mother Church, basing herself on Sacred Scripture and the words of Jesus, teaches us that “from its beginning until death, human life is surrounded by their watchful care and intercession” (cf. Matthew 18:10).[6] Each aborted child has a Guardian Angel, as does each mother and father of these children and the doctors and nurses who participated in it. How can their Guardian Angels have allowed them to take part in such grave evil?

When God assigns Guardian Angels to individual humans, he gives them a particular mission: “to watch over human beings, to whom they minister by purifying, illuminating, and perfecting them as God’s will commands.”[7] Their mission to purify, to illumine, and to perfect us is not carried out by force, but by urging and guiding us to choose what is good and reject what is evil in every aspect of life; in all that they do, Guardian Angels respect our freedom.

Just as it is possible to ignore or even reject the will of God, so it is also possible to ignore or even reject the promptings of these “ministers of divine care for every human being.”[8] We can be sure that those individuals who have participated in an abortion were not following the guidance of their Guardian Angels. We can also be sure that we are not following the promptings of our Guardian Angels when we fail to defend the unborn and come to the aid of mothers and fathers in crisis pregnancies.

In this Respect Life month, I urge, ask, and beg you to speak with your Guardian Angel so that you might discern how the Lord is calling you to help spread the Gospel of Life and remain obedient to God, especially in the most difficult situations of life, from conception to natural death. We become unprofitable and unworthy servants of God when we imitate his personalized attention and care for every human being, and, with the angels, see the beauty, truth, goodness of God’s commands, because we also have our eyes fixed on him, just as his eyes have always been fixed on us, no matter how small we are.

Each of our Guardian Angels can rightly say to God, “We are unprofitable servants; we have done what we were obliged to do.” May the same be true of you and of me so that we might rejoice before the Face of God with our Guardian Angels forever. Amen.