Homily - How is Jesus king of humanity and of the universe?

The Solemnity of Our Lord Jesus Christ, King of the Universe

Thus on Corpus Christi we take a longer look at the institution of the Holy Eucharist, one of the motifs of the Thursday of Holy Week. On the Sacred Heart we consider the implications of the piercing of the heart of Jesus on the Cross, one of the elements of Good Friday. Today we are celebrating the Kingship of Christ which is one of the elements to be found in the feast of the Ascension when we remember the exaltation of the risen Christ as Lord.

At the Ascension the disciples, who have just seen Christ lifted up into God’s glory, are told that he will return in the same way – that is, in the glory of the Second Coming. So today’s celebration is also turned toward his second Advent, closing the liturgical year and orienting us toward the purple season when we think in hope about that Second Coming with its awesome implications.[1]

Today’s Solemnity of Our Lord Jesus Christ, King of the Universe, is, though, rooted in yet another mystery of the life of Jesus, that of his Incarnation and Birth in Bethlehem.

Before we explore this connection, I hope you will be patient with me as I nerd out perhaps a little more than usual. It is important to first consider what it means to be a king and what we mean by the word universe.

Kingship is something I have always been fond of, or at least intrigued by. Growing up, I loved the legends of King Arthur and his Knights of the Round Table; I built bigger and better castles out of Lego bricks each day for my mini-figure king; and my brother, cousins, neighbors and I pretended I was a king out in the fields around our house; now I can great joy in the stories of the return of the king of Gondor.

As Americans, we have a distorted notion of kingship, largely formed by half-truths we learned about our Revolutionary War and all that. But even non-Americans often have a distorted notion of kingship, formed largely by the unvirtuous acts of royals through the centuries. At its inception in human societies, kingship, however, was something virtuous and noble. To see this, we can look to the origin of the word king.

The Latin word which we translate as king is rex. “Rex has its roots in the common ancestor of most European languages, associated with stretching, thus keeping straight (di-rect, cor-rect) and then governing.”[2] Even our English word “king” is itself telling. It comes from the old German kuning, a word related to kin and family, and means a leader of a people. Through its etymology, “the Anglo-Saxon "cyning" from cyn or kin, and -ing meaning "son of" evokes images of long-gone tribes choosing as leader a favoured son who is mystically representative of their common identity.”[3] A true king, then, is a leader who comes from among a people to guide and govern them along the straight path. But if Jesus is the Second Person of the Most Holy Trinity, how is it that he can be our king? How is it that he comes from us? To understand this, we have to return to Bethlehem.

In the womb of the Blessed Virgin Mary, the Only Begotten Son of God took our humanity upon himself for our salvation. Because of the Original Sin of Adam and Eve – which we have all inherited from our first parents – humanity owed an infinite debt to God that we cannot pay because we are mere finite mortals. Even so, because it was a debt owed by humanity, only a human could pay it. What were we to do? Looking with love upon our plight, the Father sent his Son to pay the debt we could not pay; the sinless Son of God became man to pay the debt of sinful humanity. He redeemed us – he bought us back – with the price of his own Blood shed upon the Cross. This is why the mystery of his Incarnation and Birth and so closely tied to his Death at Calvary, as well as to his Resurrection and Ascension; indeed, they cannot be separated. 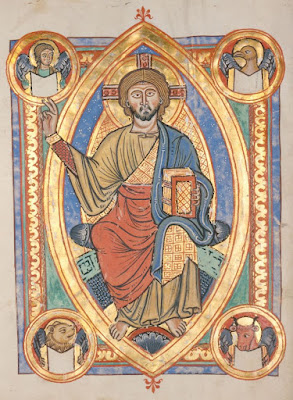 Returning to today’s Solemnity of Our Lord Jesus Christ, King of the Universe, how is it that Jesus can claim the title of king? He can do so in two ways. He can claim the title of King of Israel because he is of the royal blood of the line of King David. The very title of Christ “refers to God’s anointed king descended from David.”[4] But you and I are not members of the Kingdom of Israel, nor do we live within its borders; how then can Jesus be our king? He can do so because of our common humanity; he is the true representative of the human family because he shows us what it means to be human and how to walk along the narrow road that leads to salvation, to eternal life with God.

Now, though, we have another question: what does it mean to be king of the universe, and what is the universe?

Having been a boy in the 1980s, the first thing that comes to mind when I hear the word universe is He-Man and the Masters of the Universe. After He-Man, I think of things like Star Wars and so the title of today’s Solemnity always strikes me as a bit odd. But the origin of the word universe can help clear things up. It comes from Latin roots, unus meaning one and versus meaning to turn back or to convert or to change. Universe, then, means the totality of all that exists, from plants to animals to humans; from countries to continents; from planets and stars to solar systems and galaxies; everything that is created is part of the universe. But how can a human make such a bold and extensive claim to kingship? Christ Jesus is king of it all because, human though he is, he is also divine; he is the one who created all that exists and he has come to convert it all, to bring it all back into unity in himself. He alone can accomplish what others can only dream of.

Given all of this, we might think this feast has its origins in medieval Europe, but it does not; it was first established by Pope Pius XI in 1925. As countries throughout Europe and around the world were abandoning the idea of kingship, he called the whole Church to reconsider the kingship of Jesus Christ. Why?

In his enclyclical letter in which he established this liturgical feast of Our Lord Jesus Christ, King of the Universe, Pope Pius XI recalled the evils of his day:

...the seeds of discord sown far and wide; those bitter enmities and rivalries between nations, which still hinder so much the cause of peace; that insatiable greed which is so often hidden under a pretense of public spirit and patriotism, and gives rise to so many private quarrels; a blind and immoderate selfishness, making men seek nothing but their own comfort and advantage, and measure everything by these; no peace in the home, because men have forgotten or neglect their duty; the unity and stability of the family undermined; society in a word, shaken to its foundations and on the way to ruin.[5]

The Pope had in mind the rise of such movements as communism and the National Socialist German Workers’ Party. He hoped to stop the growth of such groups and draw people back to together under the common kingship of Christ. His hope was not achieved and society has only become more broken and divided, its foundations now well on the way to ruin, because we have, by and large, refused to truly place ourselves under Christ’s kingship; we have not given him dominion over every aspect of our lives; we have refused to follow his way of kingship, the way of love.

Email ThisBlogThis!Share to TwitterShare to FacebookShare to Pinterest
Labels: Christ the King, Homilies