Upon our lips today is that “song of sweetness,” that “voice of joy that cannot die,” that glorious word of Alleluia.[1] Having repressed this gladsome strain within our hearts these past many weeks, Holy Mother Church now urges each of us to open our lips and let this “anthem ever raised by choirs on high” and resound throughout the land.[2] Why? Because “this is the day the Lord has made” (Psalm 118:24). This is the day on which the Lord Jesus, the conqueror of sin and death, rose victorious over the grave. This is the day in which we should “rejoice and be glad” (Psalm 118:24). Alleluia!

On Friday, the Lord Jesus ascended the throne of his Cross and poured out his love for us; in doing so, he broke the chains of sin. Yesterday,

…after his triumph over the devil, he descended to the heart of the world, so that he might preach to the dead, that all who desire him might be set free… He had descended to trample death underfoot with his own power, then only to rise with the captives.[3]

Today we rejoice and cry out, “Alleluia!”, with the confidence that as we were “buried with him through baptism into death, so that, just as Christ was raised from the dead by the glory of the Father, we too might live in newness of life (Romans 6:4). 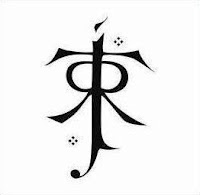 Permit me, if you will, to change course for just a moment in a direction that might at first seem a bit odd. In one of his many letters, the great J. R. R. Tolkien, the celebrated author of The Hobbit and the Lord of the Rings (and, more importantly, a devoted Catholic) answered a query about the meaning of the  of his legendarium, saying:

I should say, if asked, the tale is not really about Power and Dominion: that only sets the wheels going; it is about Death and the desire for deathlessness. Which is hardly more than to say it is a tale written by a Man![4]

Elsewhere he called this “the oldest and deepest desire, the Great Escape: the Escape from Death.”[5]

It was the professor’s firm conviction that at the heart of every man, woman, and child is a desire for deathlessness, for life without end. Is this not why we smooth out our wrinkles and dye our hair in a vain attempt to deny the reality of aging? Is this not at the heart of the recent and distressing news that a man hopes to have his head transplanted onto the body of another?[6] Whether we have yet acknowledged it or not, each of us indeed has a desire for deathlessness.

God did not decree death from the beginning; he prescribed it as a remedy. Human life was condemned because of sin to unremitting labor and unbearable sorrow and so began to experience the burden of wretchedness. There had to be a limit to its evils; death had to restore what life had forfeited. Without the assistance of grace, immortality is more of a burden than a blessing.[7]

Is this not something of what Tolkien tried to show by the unnatural long life the ring granted to its bearers, a length of life that wore away at their existence, an “endless serial living”?[8]

It was this realization that led Saint Ambrose of Milan to see death as “no cause for mourning, for it is the cause of mankind’s salvation.”[9]

In his Resurrection from the dead, in the fact that he still lives after his death, that he can move about, that he can eat and drink, that he can converse with his friends, we see that Jesus “is the death of death, death hidden in the word of God and therefore related to life, which takes death’s power away when, by the destruction of the body, men are destroyed by it in the earth.”[11] In this, though it may seem strange to say, “the tomb is not the central point of the message of the Resurrection. It is instead the Lord in his new life.”[12]

It is often said today that we Christians are fools and simpletons because we believe in the reality of the Lord’s Resurrection. Truth be told, we are

not affirming an absurd miracle but affirming the power of God, who respects his creation, without being tied to the law of its death. Indubitably death is the typical form of things in this world as it actually exists. But the overcoming of death, its real, not simply its conceptual elimination, is still today, as it was then, the object and desire of the human quest.[13]

The desire for deathlessness remains the greatest desire of the human heart, though it cannot be achieved by any technical means. Rather, it “comes about through the creative power of the word and of love. Only these powers are sufficiently strong to modify so fundamentally the structure of matter, to make it possible to overcome the barrier of death.”[14] For this reason, the Resurrection of Jesus gives us the promise of true and lasting Joy, of “Joy beyond the walls of grief, poignant as grief.”[15] The great cry of Alleluia sounds today from our lips because, in the Resurrection of Jesus the Christ, we have the confidence that “this victory is in effect possible, that death does not belong principally and irrevocably to the structure of the creature, to matter.” The message of the Resurrection is not principally about a faith in an empty tomb but about “the real power of God, and the importance of human responsibility,” a responsibility grounded in love of God, both of his love for us and of our love for him.[16] From the Incarnation to the Resurrection, “this story,” as Tolkien said, “begins and ends in joy.”

There is no tale ever told that men would rather find was true, and none which so many skeptical men have accepted as true on its own merits. For the Art of it has the supremely convincing tone of Primary Art, that is, of Creation. To reject it leads either to sadness or to wrath.[17]

Today, then, just as the Lord opened wide the tomb which tried to swallow him up, let each of us open our hearts and our ears to Jesus, the Risen Lord. Let us not be stubborn and closed off to his grace, but let us speak to him as friends and ask for the gift of his life, that we might truly, with him, escape from death. Let us hear him say to us, “I have risen, and I am with you still, alleluia.”[18]