Yes, Virginia, there is a sword in the stone

I have been a great fan of the legends of King Arthur and his Knights of the Round Table. I was fascinated by the stories as a boy and now I am particularly interested in trying to discover just who this "king" upon whom these legends are based was. One of my dream vacations would be to drive around the British Isles in search of King Arthur and his pursuits.
Saint Francis of Assisi, too, being a trabadour of sorts, must also have enjoyed the legends because he once referred to his friars as his Knights of the Round Table (one of these days I'll write an article about this).
I bring this up today because the Lion and the Cardinal has a post about about the sword of Saint Galgano: 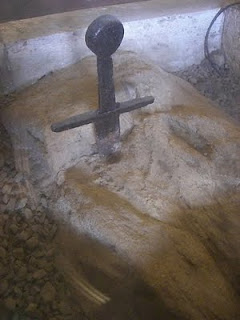 You are eyes do not receive you. That is indeed a sword thrust into a stone.
Saint Galgano was born in 1148 in Chiusdino. Saint Michael the Archangel twice appeared to him in a dream when he was twenty years old, initiating a great conversion in the life of the soldier.
Galgano eventually became a hermit. After Pope Alexander III (probably in 1180) urged him to build a monastery, Galgano returned to his hermitage and put his sword into a stone, which, we are told, received the sword easily up to the hilt, thus forming a cross.
Galgano died in 1181, the same year Saint Francis of Assisi was born.
Posted by Rev. Daren J. Zehnle, J.C.L., K.C.H.S. at 3:43 PM